Home AMERICAN BRAINWASH The Return of the Anti-Antiwar Left

Print this post.
Please make sure these dispatches reach as many readers as possible. Share with kin, friends and workmates and ask them to do likewise.
JAMES W. CARDEN

In our view, the "anti-antiwar left" is not left at all; it is a parasitic entity that simply hijacked that label. Much of it marches to the old fetid music of the old anticommunist left. 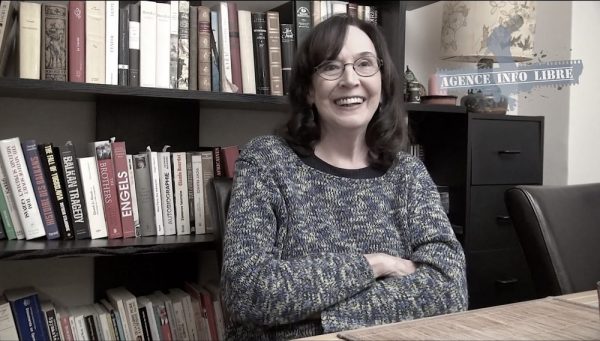 In her recently published memoir, Circle in the Darkness, the author and journalist Diana Johnstone (left)  recalls that only “a few decades ago, “the Left” was considered the center of opposition to imperialism, and champion of the right of peoples to self-determination.”

Johnstone is part of a distinguished line of American expatriate writers, who, perhaps because of an objectivity conferred by distance, saw their country more clearly than many of their stateside contemporaries. Members of the club include William Pfaff who for many years wrote from Paris and the longtime Asia correspondent Patrick Lawrence. The Paris based Johnstone brings a moral clarity to matters of war and peace that is, alas, too often absent from most contemporary foreign affairs writing. Its near total absence on the Left during the Trump years should be cause for reflection, and concern.

As Johnstone recounts, after the Cold War liberals became bewitched by the prospect of waging wars for humanitarian ends. A generation of journalists and foreign policy experts including Samantha Power, Christiane Amanpour, Jamie Rubin, and Christopher Hitchens, would make the Balkans a proving ground for their liberal theories of preventative war, in the process throwing the ancient and venerable tradition of St. Augustine’s Just War theory on the trash heap and paving the way for what was to follow in the coming decades, including Iraq II, Libya, Syria and a global drone war and a “targeted” assassination program.

At the time, Johnstone was one of the few who saw through the ruse, but, as she recalled, she couldn’t get her articles published in the liberal press. According to Johnstone, Hitchens and Company saw to that. The wisdom of bombing Serbian civilians for 78 days in order to carve out a Muslim enclave in the middle of Europe (which in short order would be overrun by the Saudis, Albanian organized crime and human organ traffickers) was rarely questioned.

Indeed, among the bien-pensants, it was impermissible.

Today, skepticism of the mainstream narrative regarding both Russia and the war in Syria is likewise deemed out of bounds by the Left. It is fair to say that a 3 year non-scandal, Russiagate, ignited a cold war fever among liberals and self-styled progressives. Indeed, liberals who once took principled stands against the Iraq war, such as Tom Dispatch and Nation regular Bob Dreyfuss, transmogrified, after Trump’s election, into frothing-at-the-mouth conspiracy theorists.

By my count, during the course of the three year Russiagate ordeal, Dreyfuss wrote at least 30 articles promoting the most ludicrous of the Russiagate conspiracies, among them that Russia

was “hiding in your Facebook,” and that, variously, Paul Manafort, Felix Slater and/or General Michael Flynn would, somehow, bring down Trump. That Dreyfuss would prove so credulous in the face of what was so clearly an absurd distraction is perhaps not surprising given his past ties to Lyndon Larouche.

Others, even less discerning than Dreyfuss, but far, far hungrier for attention, have claimed that skeptics of the now discredited collusion conspiracy theory were themselves guilty of indulging in, you guessed it, conspiracy theories of their own.

And so, if in the writings of Dreyfuss, The New York Times’ Michelle Goldberg, Mother Jones’ David Corn, The Atlantic’s Franklin Foer, New York magazine’s resident dolt Jonathan Chait, and many more besides, we can see the emergence of the anti-anti-Cold War Left, there has also reemerged alongside it the very vocal and ravenously unscrupulous anti-antiwar Left. And it is on the issue of the Syrian war on which the anti-antiwar Left has coalesced, inexplicably arguing for the wholesale takeover of a secular police state (sic) by the very same Islamist radicals who, if given the chance, would turn around and immediately kill them on the grounds of apostasy.

In Syria, the protests that began in 2011 were quickly overtaken by armed jihadists whose motto was “Christians to Beirut, Alawis to the grave.” Before he was murdered by Syrian rebels, the Jesuit missionary Father Frans vans der Lugt observed that “From the start the protest movements were not purely peaceful. From the start I saw armed demonstrators marching along in the protests, who began to shoot at the police first. Very often the violence of the security forces has been a reaction to the brutal violence of the armed rebels.”

But many prominent voices in mainstream liberal media outlets such as The New York Times, The Washington Post and VICE turned a blind eye to the atrocities committed by the Islamist opposition in their hunger for a US-led regime change operation against Bashar al-Assad. And the war fever extended from the mainstream to the progressive Left.

On the pages and website of the New York Review of Books one searches for genuine antiwar voices in vain. Instead what you most likely will come across are screeds such as the one issued by Janine di Giovanni. In her rage for another US-led war in the Middle East, di Giovanni channelled the ghost of Joseph McCarthy and baselessly accused the antiwar journalist Max Blumenthal of, you guessed it, being in league with (who else?) the Russian government.

And then there is The Intercept, funded by a shadowy billionaire with ties to the US Agency for International Development, Pierre Omyidar. Under the editorship of former Nation managing editor Betsy Reed, The Intercept has given space to some of the most strident anti-antiwar voices including those of James Risen, Robert McKay and the British-born Mehdi Hasan. Hasan’s enthusiasm for a jihadi victory over the socialist, multi-confessional Syrian state is perhaps not surprising given his past views in which he compared non-believers to “animals.”

In an April 2018 column for The Intercept, Hasan penned a hysterical open letter to those he deemed “al-Assad apologists” for the crime of expressing skepticism regarding the latest round of accusations of chemical weapons use by the Syrian [government]  “To those of you on the anti-war far left who have a soft spot for the dictator in Damascus: Have you lost your minds? Or have you no shame?,” cried Hasan. What followed was a lengthy iteration of Assad’s [putative] crimes and then, oddly, reassurances from Hasan that he too stands against no fly zones, arming the rebels and regime change wars.

So what, we might be forgiven to ask, was the point? It was simply a tedious exercise in moral preening. A speciality of the anti-antiwar Left.

Hasan’s, example is instructive because, in his obvious opportunism and sly fanaticism, he exemplifies everything that a writer like Diana Johnstone is not and, by extension, much that is seriously wrong with the anti-antiwar Left.

Worryingly, the anti-antiwar Left is not going away. Indeed, it has some powerful allies-in-waiting should Joseph R. Biden win in November. In a recent interview with CBS, Biden protege and former deputy secretary of state Antony Blinken bemoaned the fact that the Obama administration’s regime change efforts in Syria didn’t go nearly far enough.

Indeed, Biden’s foreign policy team is stacked from one end to the other with regime change and new cold war enthusiasts who, alas, will find plenty of support from the growing ranks of the anti-antiwar Left. Those who find this development more than mildly depressing might do worse than to take refuge in the work of genuine antiwar voices such as Diana Johnstone’s.

James W. Carden writes about foreign affairs from Washington, DC. His work has appeared in The American Conservative, American Affairs, The National Interest, and The Nation where he is a contributing writer.

ALL CAPTIONS AND PULL QUOTES BY THE EDITORS NOT THE AUTHORS
RevisShielded: 652
All comments subject to anti-hacking filters.
0
FacebookTwitterPinterestRedditEmail
previous post