The Democratic Party’s Racist Appeals to Minorities Are Destroying It

"A Harris administration together with Joe Biden” (Kamala Harris, on September 15th):

Among active “politicians”, Kamala Harris is ranked #21 in popularity, but has the highest “Positive opinion” of all Blacks except Barack Obama, who had a 55% “Positive Opinion”, as opposed to her own 33%.
Joe Biden chose her because he has been hugging as close to the Black, Barack Obama, as possible, and because Kamala Harris is the closest that he could find, and she’s even female, so that he can attract votes also from anyone whose top priority is to get a woman into the Presidency.
Besides: here is the list of the numbers of billionaires who had funded each of the Democratic Party’s Presidential candidates, first at the start of their campaigns, and then, at the end of their campaigns, both as calculated by Forbes magazine:
——
5 August 2019:
#1 Pete Buttigieg: 23 billionaire donors
#2 Cory Booker: 18 billionaire donors
#3 Kamala Harris: 17 billionaire donors
#4 Michael Bennet: 15 billionaire donors
#5 Joe Biden: 13 billionaire donors
#6 John Hickenlooper: 11 billionaire donors
#7 Beto O’Rourke: 9 billionaire donors
#8 Amy Klobuchar: 8 billionaire donors
#9 Jay Inslee: 5 billionaire donors
#10 Kirsten Gillibrand: 4 billionaire donors
#11 John Delaney: 3 billionaire donors
#12 Elizabeth Warren and Steve Bullock: 2 billionaire donors each
#13 Tulsi Gabbard, Andrew Yang, and Marianne Williamson: 1 billionaire donor each
#14 Bernie Sanders, Julian Castro, Bill De Blasio, and Tim Ryan: 0 billionaire donors
——
2 March 2020:
#1 Biden 66
#2 Buttigieg 61
#3 Klobucar 33
#4 Steyer 13
#5 Warren 6
#6 Gabbard 3
#7 Bloomberg 1
#8 Sanders 0
(The others had already dropped out, and were therefore not listed.)
——
In other words: Harris drew even more billionaires than Biden did (until her supporters and Buttigieg’s supporters and O’Ruorke’s supporters switched to voting instead for Biden), and he had announced at the outset that he would choose a black woman; so, Harris was his virtually inevitable choice, given the racism of his campaign.
Biden had been the leading Democratic U.S. Senator who opposed racial integration, and he was even so strong in support of segregation, throughout his career, as to have quietly backed bills for segregation that were put forth by the notorious Republican segregationist U.S. Senator Jesse Helms.
However, when running for the Democratic Party’s Presidential nomination, Biden knew that only by lying about this could he stand even a chance to win the Party’s nomination, and so he made an intense pitch to black voters, by hugging himself to the black Obama, and by outright lying and saying that the NAACP had endorsed Biden — though actually Biden was opposed by the NAACP for his segregationist record, and they furthermore had an established policy of not endorsing any politician. Bernie Sanders had refused to play the racial game, and therefore he not only refused to emphasize that he had consistently refused to support segregationist policies, but he never brought up the historically established fact that he had publicly demonstrated against segregationist policies as far back as in the 1960s. So: the vast majority of Blacks voted in the primaries for Biden, against Sanders; and Biden knows, even more than he did before, that the only way he will be able to win the Presidency is if he can bring out throngs of Blacks to the polls on Election Day, and also of women, to vote for him. 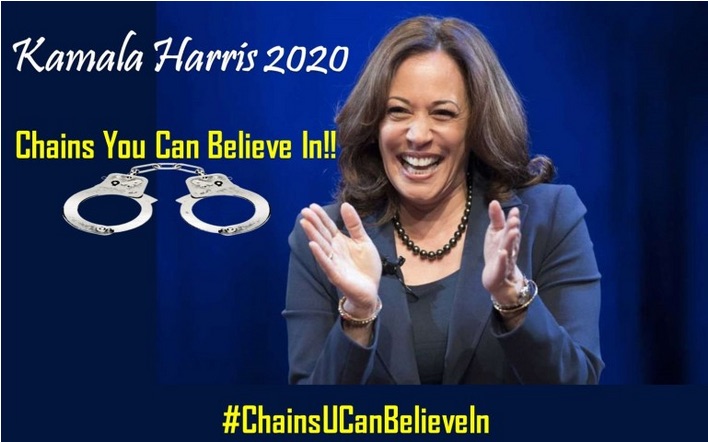 Many activists are not fooled by the obligatory racist/identity politics signaling provided  by Harris' "black" color. They look at her record and are horrified and angered at the Democrats' cynicism.

This is the reason why the Biden campaign pays for Kamala Harris to say to minority small-business-owners:
“A Harris Administration together with Joe Biden as the President of the United States, the Biden-Harris Administration, will have access, provide access, to one hundred billion dollars in loans and investments for minority business-owners.”
It’s not just that Biden is so incompetent as to have chosen the unpopular Harris; it is because he and his Party are owned by their billionaires just as much as Trump and his Party are owned by their billionaires — and this is the type of Government that results from that.
The solution is not for the Democratic Party to make special appeals to Whites (the Republican Party already does plenty of that), but instead to condemn even its own billionaires (and most especially any who directly or indirectly donate to politics) and make clear that only by freeing America from the control over the U.S. Government by those few hundred individuals (and their corporations and ‘charities’ and PACs, etc.) is there any realistic hope for America’s future. Only by switching away from aristocracy to democracy will the Democratic Party, and America, have real hope.
Investigative historian Eric Zuesse is the author, most recently, of  They’re Not Even Close: The Democratic vs. Republican Economic Records, 1910-2010, and of  CHRIST’S VENTRILOQUISTS: The Event that Created Christianity.