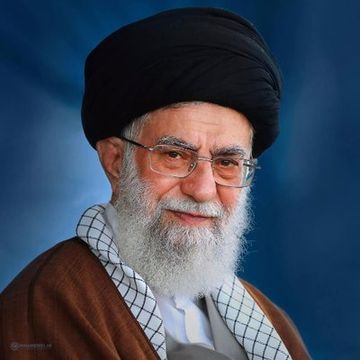 Iran's Maximum Leader Khamenini: personally sanctioned by the United States. The sheer arrogance, smugness and arbitrariness of such an act speaks volumes about the political toxicity of the West and why so many nations are uniting against it.

During his campaign President Joe Biden promised to punish Saudi Arabia's clown prince Mohammad bin Salman for ordering the murder of the Muslim Brotherhood propagandist Jamal Khashoggi. Like with most of his other campaign promises Biden of course never had the intention to follow through on that.
Biden's press secretary Jen Psaki, known for bullshit spoken in an assertive tone, defended Biden's falsehood with another lie:

The White House on Sunday defended its decision to not target Saudi Crown Prince Mohammed bin Salman after a U.S.intelligence report linked the royal to the 2018 murder of journalist Jamal Khashoggi.
"Historically and even in recent history, Democratic and Republican administrations, there have not been sanctions put in place for the leaders of foreign governments where we have diplomatic relations and even where we don't have diplomatic relations," White House press secretary Jen Psaki said during an interview on CNN's "State of the Union" program.

Here is the video clip of Biden's and Paski's lies. Her quote starts at 1:58 min.

The Office of Foreign Assets Control has a Sanction List Search feature which allows anyone to look up entities and persons who are under U.S. sanctions.

The pic below shows the entry for one LUKASHENKA, Alyaksandr Hryhoryavich, whose title is noted as 'President'.

The pic below shows the entry for one MADURO MOROS, Nicolas, whose title is noted as 'President of the Bolivarian Republic of Venezuela'.

The pic below shows the entry for one KHAMENEI, Ali Husseini, whose title is noted as 'Supreme Leader of Iran'. The 'Additional Sanctions Information' says that he is 'Subject to Secondary Sanctions'.

There are several more presidents and heads of states under U.S. sanctions than those three above. Here is for example President of the Syrian Arab Republic. You can click here to find more. If one of Trump's press secretaries had issued the above lie the media would of course have lambasted them for that.

Do not expect such outcries with anything that is coming from the Biden administration. While it is running the same imperial policies as the Trump administration, the media will defend those for Biden just as they condemned them when Trump was reigning.

Update (20:01 UTC): Stephen McIntyre points out that the Guardian 'modified' the Psaki quote to hide her lie. It writes:

The White House spokeswoman, Jen Psaki, said on Monday: “We reserve the right to take any action at a time and manner of our choosing.” But she added the US “has not typically sanctioned government leaders of countries where we have diplomatic relations”.

The words 'not typically' do not occur in the video clip (1:58m) of Psaki's CNN appearance. They were added by the Guardian writers Michael Safi and Julian Borger to hide Psaki's lie which was made to defend Biden's falsehood.

Moon of Alabama is edited by a German journalist working nder the nom de guerre, "B".
Up to You.

Larry Romanoff: Did the Virus originate in the US?