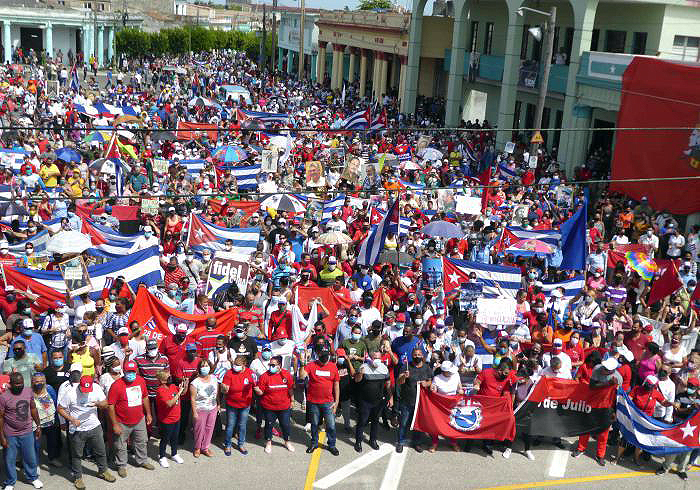 On the day of the protests and acts of vandalism in Cuba President Miguel Diaz-Canel denounced the desire of the United States (US) government to provoke a massive social outburst on the island. “To which all that propaganda and all those ideological constructions contribute… to summon the so-called humanitarian interventions, which end up in military interventions… that crush the sovereignty of the peoples.” Díaz-Canel informed and analyzed before the people his talk with the nonconformists in San Antonio de los Baños. There are not many leaders who assume such a radically democratic behavior.

The following day his Mexican counterpart, Andres Manuel Lopez Obrador, put his finger on the sore spot when he affirmed: if they wanted to help Cuba, the first thing they would have to do is to put an end to the blockade “as most of the countries of the world are requesting… it would be a truly humanitarian gesture”. It is clear that the blockade is the fundamental cause of the severe shortages of food and medicine, the power cuts and other daily suffering in Cuba. This, together with the frenetic subversive activity of the US, created the psychological conditions, in sectors where the revolutionary message has not been able to reach, to trigger the events of July 11.

The Trump administration took advantage of the pandemic and the economic crisis created by it to make it almost impossible for foreign currency to enter Cuba at a time when Havana is bleeding financially to cope with the disease. Contrary to his campaign promises, President Biden has maintained the economic asphyxiation as he inherited it from his predecessor, in addition to intensifying the subversive policy towards the island under great pressure from the extreme right in Miami.

Three weeks before the riots, 184 countries of the world, with only the United States (US) and Israel voting against, requested at the UN the end of the blockade. But Biden now pretends to be crazy and cynically asks the Cuban government to “listen to its people and provide for their needs”.

The idea of a supposed “humanitarian corridor” for Cuba (#SOSCuba), with more than 2 million tweets) was installed in the digital networks and amplified by the big media loudspeakers of imperialism between July 9, 10 and 11. It is difficult to find anything more shameless when the Cuban government exhibits one of the best performances at international level in the fight against the pandemic.

A report by Spanish expert Julian Macias Tovar gave an account of the origin, exponential growth and technical details of the expansion of the aforementioned tags on the web, based on a very costly and sophisticated operation of psychological warfare, which included the opening of thousands of Twitter accounts and the use of thousands of bots that produced 5 retweets per second, a highly expensive operation. But in the afternoon of the following day, Cuban Foreign Minister Bruno Rodríguez Parrilla provided new and more extensive and irrefutable data on the deployment of the monumental campaign and the advanced technology applied. Rodríguez Parrilla recalled the warning he had made in the speech he delivered at the UN on the very day the blockade was voted against: “The United States employs considerable resources, social laboratories and high-tech tools in an unbridled campaign aimed at discrediting Cuba through the use of lies and the manipulation of data”. On June 23 -he continued- “we already had information, and it was evident for those who follow digital networks and data, that a large-scale communication operation was underway that day”. Likewise, the Foreign Minister recalled the activation of the mercenary fifth column that the U.S. government maintains on the island with hundreds of millions of dollars in allowances, and held it responsible for the consequences derived from these acts, such as a naval flotilla headed for Cuba, which is being talked about in Florida.

In short, there are systematic actions and substantial U.S. financing of destabilizing plans against Cuba that have made it possible to set up a sophisticated framework of unconventional warfare, with an important communicational ingredient in which, in recent times, social networks play a decisive and growing role. It is understood that with advanced artificial intelligence resources and the application of algorithms to install, as we have seen, behaviors favorable to subversive plans in swathes of the population.

In the face of the destabilizing escalation, President Díaz-Canel called on the revolutionaries to take to the streets and on Cubans “to unity, respect and love for life”. This is nothing more and nothing less than the defense of the homeland and the validity of the socialist constitutional order, voted by 86 percent of voters a little more than two years ago.

Understanding the mess in South Africa: Riots and looting, but why? (Special dossier)