For generations, the Western corporate press has been chiefly a disinformation machine designed to prop up global capitalism and US interests.

BOUNDLESS HYPOCRISY: The same corporate outlets that most vocally profess concern over disinformation are the ones spreading it most casually. NBC's Assange report is the perfect case study. 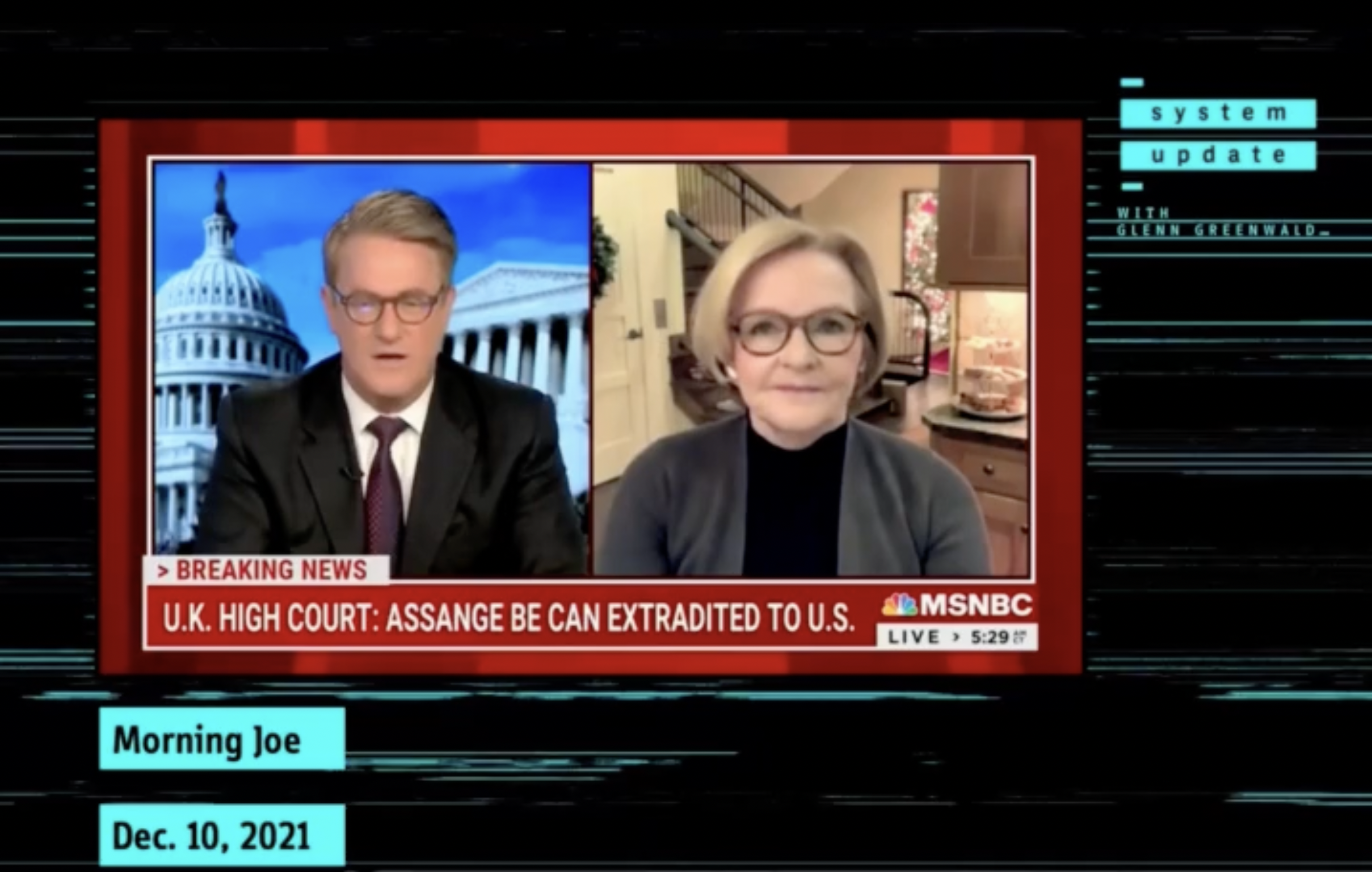 MSNBC's Joe Scarborough and Claire McCaskill tell one lie after the next during a purported news report on the case of Julian Assange, Dec. 10, 2021

The war on "disinformation” is now one of the highest priorities of the political and media establishment. It has become the foundational justification for imposing a regime of online censorship. Around the world, new laws are being enacted in its name to empower the state to regulate discourse. Exploiting this cause, a small handful of billionaires are working in unison with Western security state agencies — under the guise of neutral-sounding names like The Atlantic Council — to set the limits of permissible thought and decree what is true and false. Corporate media outlets are attempting to rehabilitate their shattered image by depicting themselves as the bulwark against the rising tide of disinformation.

It is an understatement to say that this righteous cause is a scam. That its motive is power and control over speech and thought — to eliminate dissent and discredit competition — rather than a noble quest for truth is almost too self-evident to require explanation. No human institutions should be trusted with the inherently tyrannical power they seek to arrogate unto themselves: to decree truth and falsity with such authoritative power that views they have decreed "false” become prohibited, off-limits, even worthy of punishment.

A foundational view of the Enlightenment was that truth and falsity are best discovered by humans engaging in free inquiry and appealing to reason and persuasion, rather than being captive to the whimsical decrees of centralized authority dictating to citizens what they are and are not permitted to believe. That is why I believe, as I wrote at length in a 2013 Guardian article, that at the heart of every censor lies hubris: the belief that they are so evolved, enlightened and superior that they have risen above the eternal human propensity to err, enabling them to ascertain universal truth whose validity is so unassailable that nobody should be permitted to question it let alone dissent from it.

"Corporate media outlets are attempting to rehabilitate their shattered image by depicting themselves as the bulwark against the rising tide of disinformation...It is an understatement to say that this righteous cause is a scam..."

All that said, there is a core truth — an unintentional one — that lies at the crux of this elite war on "disinformation." It is absolutely true that U.S. political discourse is drowning in deliberate disinformation campaigns and lies. It is also true that this disinformation epidemic is a serious menace, a toxic plague on our democracy and society. That part they have right.

Where they have gone wrong — very, very wrong — is how they have identified the most harmful sources of this disinformation. It does not emanate primarily from Trump boomers on Facebook or dark web QAnon groups or mischievous and transgressive teenagers on 4Chan. Ordinary citizens are obviously as capable as anyone of believing and spreading false assertions. But the far more damaging, destructive, organized and coordinated disinformation campaigns come from major corporate media outlets themselves and their security-state partners — particularly the corporate outlets that most vocally and flamboyantly claim to be so profoundly concerned about disinformation that they want to censor the internet in the name of stopping it. They are the ones who spent the last five years flooding the country with demented CIA-constructed conspiracies about a Kremlin takeover of the U.S. using clandestine sexual blackmail over the president and hallucinating Russian agents hiding under every bed; so many fabrications were disseminated under the rubric of that fairy tale that it is genuinely hard to choose the worst.

Keep this in mind, NBC is owned by Comcast, a cable monopolist that acquired the company from GE in 2009.
—The Editor

Arguably the most pernicious and prolific disseminator of organized disinformation campaigns is NBC News, which includes its cable unit MSNBC. We have spent the last several months working on a mini-documentary demonstrating how most of the coordinated lies from the U.S. security state were spread by a tiny handful of pundits, three of whom — Rachel Maddow, all-but-official CIA spokesman Ken Dilanian, and former Bush/Cheney spokesperson Nicolle Wallace — work for NBC News. That report will be published shortly.

But this week we produced a Rumble video dissecting one specific two-minute segment that NBC aired in order to demonstrate how casually, aggressively and constantly NBC's highest-paid personalities lie to the public. As I note in this new video, I use the term “lie” here not the way it has been used by the liberal CNN/NBC/Atlantic/NYT corporate media axis over the last five years: 1. anything Donald Trump or his supporters say; 2. anything that contravenes liberal orthodoxies. In this video report, I use the term "lie” in its most literal, restrictive and classic sense: namely, the assertion of demonstrably false factual claims with either the knowledge that it is false or complete indifference to its truth or falsity.

On December 10, MSNBC aired a segment on Morning Joe — a purported news report featuring its host Joe Scarborough, the former GOP Congressman from Florida, and its regular paid contributor Claire McCaskill, the former two-term Democratic Senator from Missouri — that packed one lie after the next into two short minutes. The duo was purporting to explain to its audience the implications of last week's ruling by a British court approving the Biden DOJ's request to extradite Julian Assange to the U.S. to stand trial on espionage charges in connection with the 2010 publication by WikiLeaks, in partnership with numerous mainstream media outlets, of a cache of secret documents revealing various war crimes, lies and corruptions on the part of the U.S. and UK governments and their allies.

Within the span of two minutes, these NBC personalities told four blatant lies about the Assange case. I do not mean that they asserted dubious opinions or questionable narratives or even misleading claims. I mean that they outright lied about four separate matters that are crucial to understanding the Biden administration's attempted extradition and prosecution of Assange. These lies were not just misleading but pernicious, as they were designed not merely to mislead the public but to provoke them to believe that one of the gravest attacks on press freedom in years — the imprisonment of a journalist for the crime of reporting true and accurate information about the crimes of power centers — is something viewers should applaud rather than denounce.

We took the time to dissect this segment and to amass the dispositive proof of their multiple lies not because we think Scarborough and McCaskill will pay any price or will have to retract any of this. Of course they will not. They are doing their job, which is to lie in a way that flatters the ideological preconceptions of NBC viewers, who hate Assange due to the role his reporting played in harming the Democratic Party during the 2016 election, which Hillary Clinton herself claims was one of the two primary reasons she lost.

We did this video report in order to illustrate how easily and reflexively these corporate outlets lie; to demonstrate that the public's view that these outlets are completely untrustworthy and contemptible is valid and correct; and to set the record straight about the Assange case. We realize that not all subscribers here want to watch a one-hour video, and for that reason — as we do with all of the video reports we produce — we will shortly publish a written transcript of the program for our Substack subscribers. But I really hope people will take the time to watch this particular video: since the lies came in the form of video, we therefore concluded that using video to highlight the severity and intentionality of this lying was the most effective way to demonstrate how noxious it really is.

To support the independent journalism we are doing here, please subscribe, obtain a gift subscription for others and/or share the article:Subscribe now

A Lesson In Real Realism