Both parties are but interchangeable wings of a duopoly built to fool the masses but, at present, it is the Democrats (and liberals) who lead the way to the slaughterhouse. 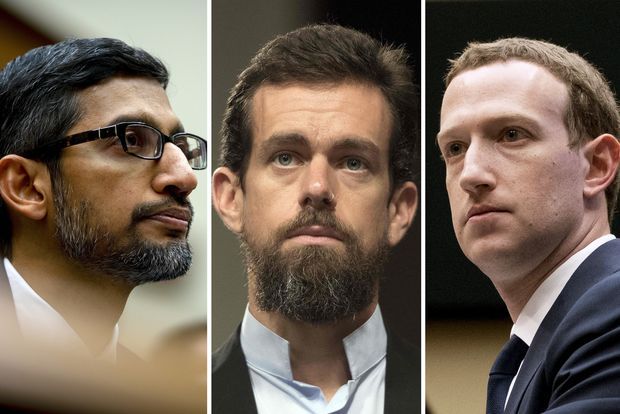 (L to R): The oligarchic bosses of Google, Twitter and META (Facebook). Are these fellows any better than the government itself when it comes to the death of free speech? In any case, agenda-wise, their programs and interests are inseparable from those of the "US government".

PREFATORY NOTE BY THE EDITOR
Inhabiting a clusterfuck of ignorance and disinformation, Americans are woefully ill-equipped to distinguish truth from falsehood. Granted, the desire to expunge the lies from the national debate is valid and healthy, but that train left the station a long time ago. It left the station when Americans —mostly in the immediate postwar period—the "Eisenhower years"—dropped their guard to concentrate on living the American Dream, brushing aside the need to understand real politics. They did not see that the postwar affluence was the product not so much of capitalism's wonderful design—long enshrined by hucksters as "the American Way of Life"—but of a historically brief and exceptional moment in which the United States had found itself as the sole global industrial superpower, with all rivals in ruins.

Today, as they ponder who to trust to clean up the obviously contaminated public communications field, flailing about like the legendary drunk blind men in the medieval village, they forget —or never realised—that there is no real effective difference between the US government and private corporate power: the latter totally controls the former, like a clever puppeteer controls its dummy. This is something of an iron law: The nature of the state—the composition of its dominant class— determines the rules of the game, and thereby all policy content. In a capitalist "democracy", it is the ruling bourgeoisie that controls all social decisions, implementing its own brand of dictatorship, the tyranny of the big property owners, a type of rule that only occasionally accommodates itself to public unrest, not to really accede to the just demands being proferred but to co-opt them. As Irish patriot and socialist James Connolly reminded us, "Governments in capitalist society are but committees of the rich to manage the affairs of the capitalist class." So, those who believe private power (Big Tech), is less risky as a fiduciary of our freedom of speech are alarmingly wrong. It is the same as if they entrusted the supposedly dreaded government with the exercise of censorship at will. Corporate power and government power are a seamlessly integrated continuum in all capitalist states, and so it is in America: the optics may vary, always to fool the low-info crowd, but at the end of the day they share the same political DNA. Capitalism in its last, degenerate phase, imperialism, has eviscerated all possible distinction between the two formal spheres.

Incidentally, while we sometimes use establishment sources as references, we DO NOT VOUCH for their trustwortiness, as ALL establishment institutions are also part of the US empire, and therefore likely to be manipulated to serve its mendacious agenda. Caution is in order. Never let your guard down when "consuming" information.—P. Greanville

Amid rising concerns over misinformation online – including surrounding the COVID-19 pandemic, especially vaccines – Americans are now a bit more open to the idea of the U.S. government taking steps to restrict false information online. And a majority of the public continues to favor technology companies taking such action, according to a new Pew Research Center survey. 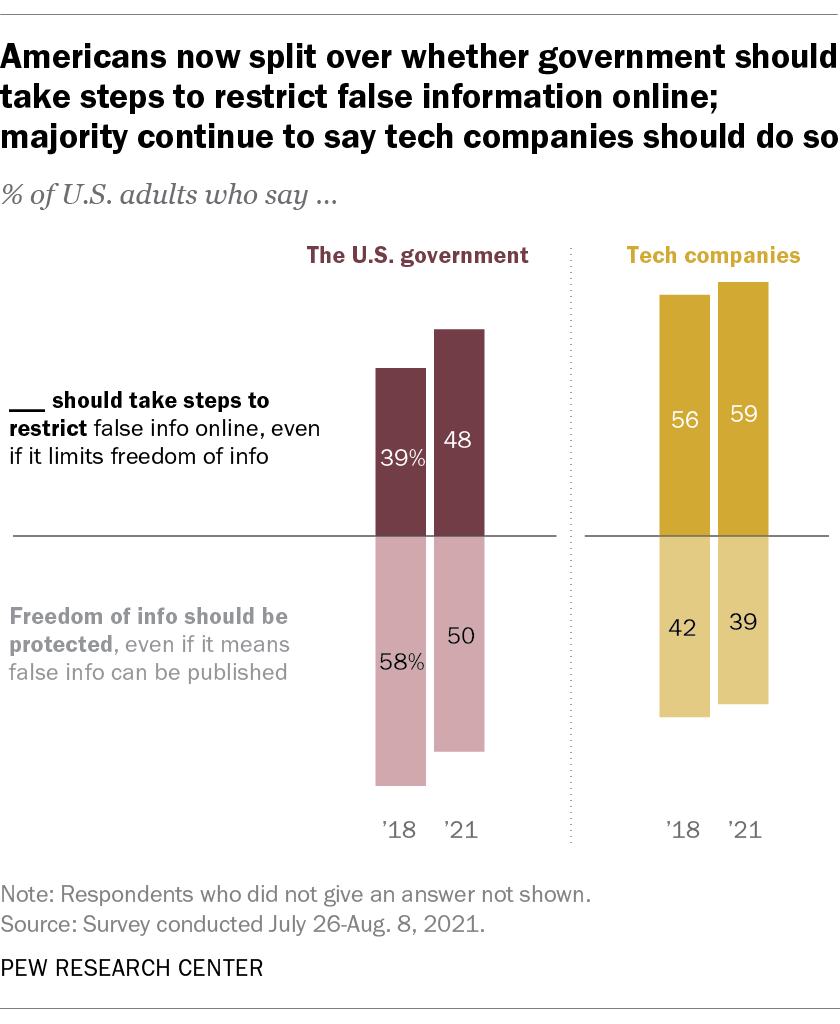 Roughly half of U.S. adults (48%) now say the government should take steps to restrict false information, even if it means losing some freedom to access and publish content, according to the survey of 11,178 adults conducted July 26-Aug. 8, 2021. That is up from 39% in 2018. At the same time, the share of adults who say freedom of information should be protected – even if it means some misinformation is published online – has decreased from 58% to 50%.

When it comes to whether technology companies should take steps to address misinformation online, more are in agreement. A majority of adults (59%) continue to say technology companies should take steps to restrict misinformation online, even if it puts some restrictions on Americans’ ability to access and publish content. Around four-in-ten (39%) take the opposite view that protecting freedom of information should take precedence, even if it means false claims can spread. The balance of opinion on this question has changed little since 2018.

How we did this 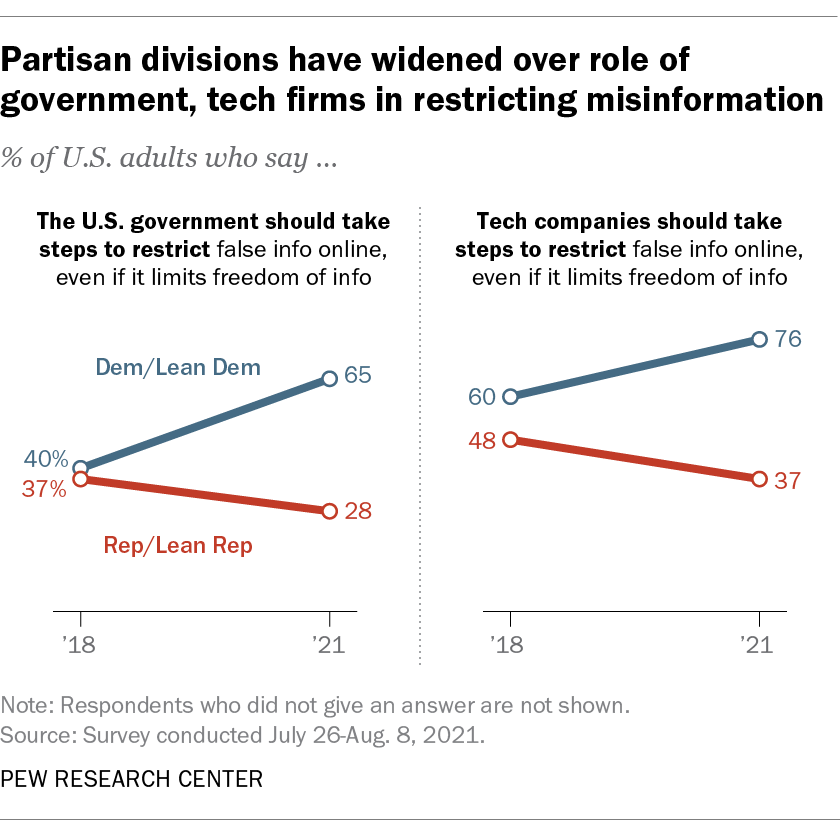 Partisan views on whether technology companies should take such steps have also grown further apart. Roughly three-quarters of Democrats (76%) now say tech companies should take steps to restrict false information online, even at the risk of limiting information freedoms. A majority of Republicans (61%) express the opposite view – that those freedoms should be protected, even if it means false information can be published online. In 2018, the parties were closer together on this question, though most Democrats still supported action by tech firms.

Some demographic differences that existed on these questions in 2018 have now largely disappeared. Three years ago, older Americans and those with less education were more likely than younger and more educated adults, respectively, to say the U.S. government should take steps to restrict false information online, even if means limiting some freedoms. Now, Americans across nearly all age groups are fairly evenly divided between the two views. Similar changes have occurred when it comes to Americans’ educational background.

Women still tend to be more open than men to the idea of both the government and tech companies taking action to restrict false information online, though both groups have become a bit more supportive of the government taking such steps.

Note: Here are the questions used for this analysis, along with responses, and its methodology. 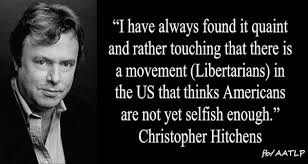 Scott Ritter: A war with Russia would be unlike anything the US and NATO have ever experienced