‘Russian Propaganda’ Is The Latest Excuse To Expand Censorship

As usual, although the censorship project is fully bipartisan, it is Democratic party creeps, like Mark Warner, who lead the charge.

February 27, 2022 9 minutes read
Be sure to circulate this article among friends, workmates and kin. 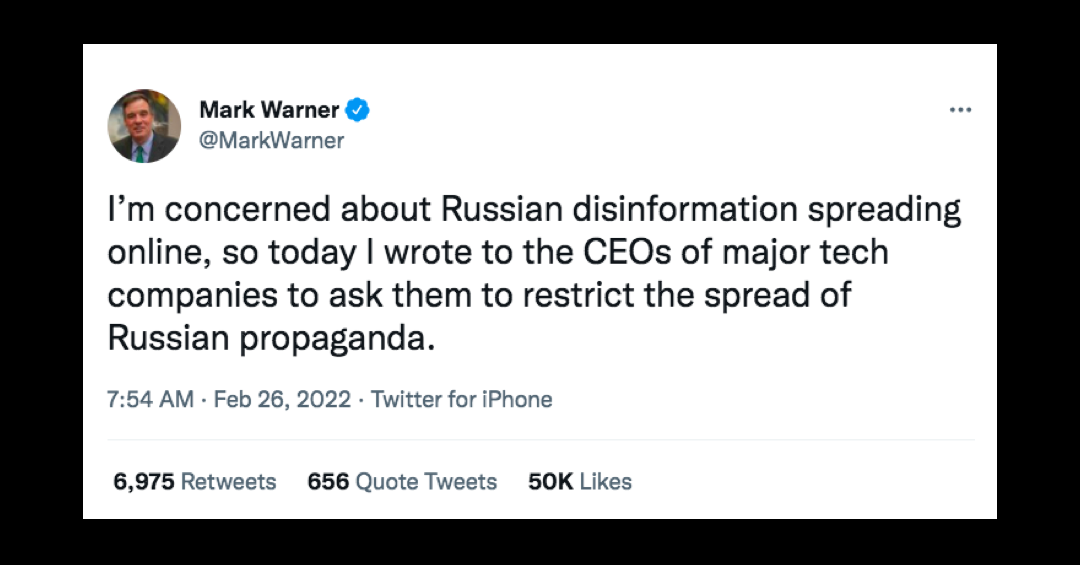 This Congressional creep is concerned about the exercise of free speech by antiwar people.

RT’s audience makes up about 0.04% of TV viewing in the UK. This isn’t about RT, it’s about the the agenda to continually expand and normalize the censorship of unauthorized speech.

“I’m concerned about Russian disinformation spreading online, so today I wrote to the CEOs of major tech companies to ask them to restrict the spread of Russian propaganda,” US Senator Mark Warner tweeted on Friday.

Since then YouTube has announced that it has suppressed videos by Russian state media channels so that they’ll be seen by fewer people in accordance with its openly acknowledged policy of algorithmically censoring unauthorized content, as well as de-monetizing all such videos on the platform. Google and Facebook/Instagram parent company Meta both banned Russian state media from running ads and monetizing on their platforms in response to Russia’s invasion of Ukraine. Twitter announced a pause on ads in both Russia and Ukraine.

“Glad to see action from tech companies to reign in Russian propaganda and disinformation after my letter to their CEOs yesterday,” Warner tweeted on Saturday. “These are important first steps, but I’ll keep pushing for more.”

For years US lawmakers have been using threats of profit-destroying consequences to pressure Silicon Valley companies into limiting online speech in a way that aligns with the interests of Washington, effectively creating a system of government censorship by proxy. It would appear that we’re seeing a new expansion of this phenomenon today.

Glad to see action from tech companies to reign in Russian propaganda and disinformation after my letter to their CEOs yesterday. These are important first steps, but I’ll keep pushing for more.

And the imperial media are pushing for more. Articles and news segments warning of the sinister threat posed by Russian propaganda to misinform and divide western populations using the internet are being churned out at a rate that’s only likely to increase as this latest narrative management campaign gets into full gear. The Associated Press has a new article out for example titled “War via TikTok: Russia’s new tool for propaganda machine“.

“Analysts at several different research organizations contacted by The Associated Press said they are seeing a sharp increase in online activity by groups affiliated with the Russian state,” AP writes. “That’s in keeping with Russia’s strategy of using social media and state-run outlets to galvanize domestic support while seeking to destabilize the Western alliance.”

The “different research organizations” AP ends up citing include “Cyabra, an Israeli tech company that works to detect disinformation,” as well as the state-funded NATO narrative management firm The Atlantic Council.

Dopey Louise Mensch wannabe NatSec LARPer calling for me to be labeled "State Affiliated Media" and de-platformed across all western social media because RT is one of the many outlets who occasionally republish my blogs for free. https://t.co/54yZtQUsFz pic.twitter.com/XKzLnwvAPs

Imperial narrative manager Robert Potter has a thread on Twitter currently calling for me and other anti-imperialist content creators to be labeled “State-Affiliated Media” on Twitter and ideally de-platformed across all western social media, in my case solely because RT is one of the many outlets who occasionally choose to republish some of my blog posts for free.

I am not as Potter claims “an OP Ed columnist for Russia Today.” I don’t work for RT, I don’t write for RT, I don’t submit articles to RT, and I’ve never been paid by RT or the Russian government. RT is just one of the outlets who sometimes avail themselves of my longstanding invitation for anyone who wants to to republish my work free of charge. That RT editors would find my daily rants against western imperialism agreeable is not scandalous or conspiratorial but normal and self-evident.

Yet for agents of imperial narrative control like Potter (who ironically works directly for the US State Department but thinks my posts should be labeled “State-Affiliated Media” by Twitter), even this is enough to justify complete silencing. I will not be in the slightest bit surprised to see a great deal more of these efforts as the new cold war continues to escalate.

The Center for Countering Digital Hate, an empire-loyal NGO ostensibly focused primarily on fighting racism and prejudice, has published a report accusing Facebook of failing to label Russian propaganda as such 91 percent of the times it occurs. The CCDH decried Mark Zuckerberg’s “failure to stop Facebook being weaponized by the Russian state”. (sic)

This sudden narrative management thrust has also seen RT taken off the air in nations like Australia, Germany and Poland, with pressures mounting in France and the UK to follow suit.

This despite the fact that all western powers would have to do to eliminate RT completely is simply start allowing leftist and anti-imperialist voices to be heard on mainstream media platforms. It would immediately suck up RT’s entire foreign audience as people who’d previously needed to look outside the mainstream for sane perspectives gravitate toward media made with much better funding and a higher level of talent.

But of course we all know that’s never going to happen. The imperial media aren’t going to subvert RT by platforming voices who dispute the empire’s narratives no matter how badly they hate it, because the exact reason they hate RT is because it disputes the empire’s narratives. They’re not worried about Russian propaganda operations, they’re worried about someone else running interference on their own propaganda operations.

Whoever controls the narrative controls the world. Humans are storytelling creatures, so whoever can control the stories the humans are telling themselves about what’s going on in the world has a great deal of control over the humans. Our mental chatter tends to dominate such a large percentage of our existence that if it can be controlled the controller can exert a tremendous amount of influence over the way we think, act, and vote. 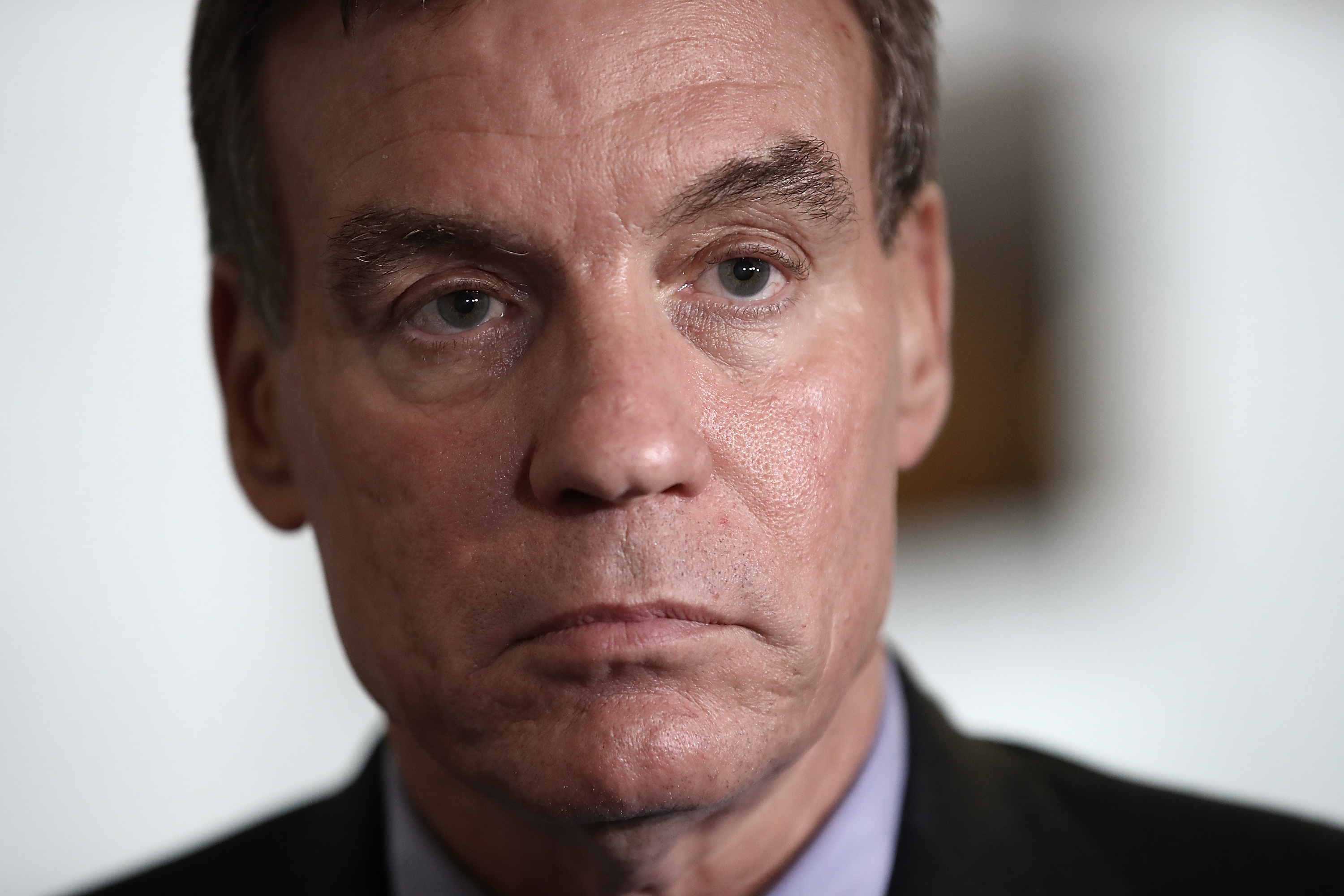 Mark Warner (D-VA) : Always putting the interests of the oligarchy above the Constitution.  Sadly, he's the norm, not the exception. (Photo by Win McNamee/Getty Images)

The powerful understand this, while the general public mostly does not. That’s all we’ve been seeing in these attempts to regulate ideas and information as human communication becomes more and more rapid and networked. An entire oligarchic empire is built on the ability to prevent us from realizing at mass scale that that empire does not serve us and inflicts great evil upon our world. The question of whether our species can awaken to its highest potential or not boils down to whether our dominators will succeed in locking down our minds, or if we will find some way to break free.

The (quite possible) Ukrainian quagmire