Home CAPITALIST TENTACLES & FRONTS Only NATO Could De-Militarise Itself!

August 14, 2022
Please make sure these dispatches reach as many readers as possible. Share with kin, friends and workmates and ask them to do likewise.

By James Tweedie for the Saker blog 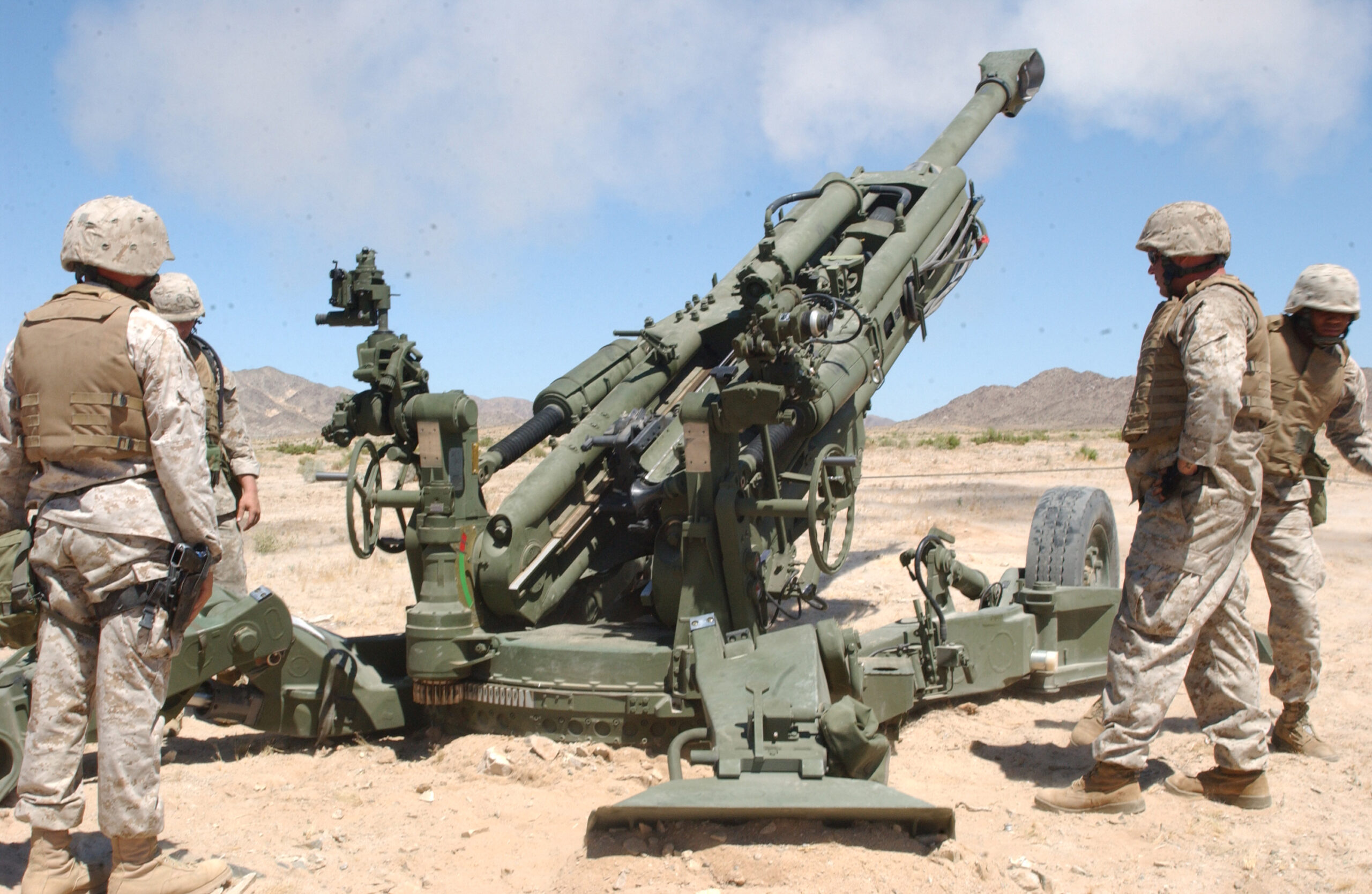 The fabled M777 Howitzers have failed to turn the tide of war in Ukraine.

In a scene from the 1974 film The Four Musketeers, the second part of the previous year’s The Three Musketeers, the vain Porthos (Frank Finlay) shows the pious Aramis (Richard Chamberlain) his new trick: He draws his rapier and throws it into the bullseye of a target.

Aramis tells Porthos to try that again, but with himself as a live target. The musketeer easily parries Porthos’ hurled sword to one side. “Only Porthos could invent a new way of disarming himself!” Aramis mocks, before chasing his friend around the gymnasium.

NATO leaders obviously don’t watch enough classic swashbucklers. In their rush to arm the Ukraine since before the start of Russia’s ‘demilitarisation’ operation there, several eastern member-states have managed to demilitarise themselves without Moscow having to lift a finger.

Poland has sent 232 T-72 main battle tanks, almost half its entire tank fleet, over the border into the Ukraine. The Donbass militias have already captured some examples with almost no miles on the clock. Warsaw has ordered 1,000 K2 ‘Black Panther’ tanks from South Korea and 366 M1 Abrams from the US as replacements, but deliveries won’t be completed until 2026.

The Czech Republic has reportedly handed over all 15 of its Mi-24 helicopter gunships — one of the types Russia is using to pound the Ukrainian army — along with 56 infantry fighting vehicles, 40 self-propelled artillery vehicles and 20 Grad-style 122mm multi-launch rocket system (MLRS) trucks.

After donating an S-300 surface-to-air missile (SAM) system, neighbouring Slovakia is weighing up sending its one squadron of 11 MiG-29 fighter jets. The government is seeking guarantees from neighbouring countries that their air forces will defend its airspace until it can find replacements if it decides to give up its entire fixed-wing combat capability.

Meanwhile the defence ministry has ordered 14 F-16 multi-role fighters from the US — an aircraft from the 1970s that the MiG-29 was built to outfly — but the first aircraft won’t arrive until 2024. At least the Slovaks had the sense not to give up 30 T-72s after Germany only offered them 15 Leopard-2 tanks to replace them.

And just last week it emerged that North Macedonia, one of the newest balkanised statelets in the Balkans, transferred four Su-25 ground attack jets it bought from the Ukraine in 2001 back there, along with 31 Russian T-72s — disbanding its army’s only armoured battalion in the process. In return, the US will give the country’s army some Joint Light Tactical Vehicles, an oversized four-seat jeep with just enough armour to stop a rifle bullet.

If Russia really did decide to roll the tanks into the former Warsaw Treaty countries, like their increasingly-hysterical politicians claim Moscow is planning, they would likely face little more opposition than infantrymen armed with rifles and machine-guns. The battalion-sized ‘tactical groups’ of troops from the US, UK and other ‘big boy’ NATO members stationed in eastern Europe would make no difference. They’re only there to provide the pretext for ‘escalation to the nuclear threshold’, as Andrei Martyanov says.

In fact the stream of announced (if not yet delivered) “packages” of military aid is really starting to scrape the barrel of NATO inventories. The UK announced on July 21 it was sending 20 155mm self-propelled guns — although those had already been accounted for months earlier when they were bought from Belgium’s reserves.

The Ministry of Defence also pledged 36 105mm (four-inch) artillery pieces, not even more the much-vaunted six-inch (155mm) M777s partly made in the UK. The 105mm shells hold about a quarter as much high explosive as the 155s, and can reach a maximum 12 miles compared to 19 for the bigger guns.

The US has promised four more of the holy HIMARS, plus another 72,000 155mm shells for guns which have mostly been bombed already. Russia also claims to have hit six out of the 12 HIMARS launchers the US has already sent — and which have failed to turn the tide of the war.

The two really high-profile attacks launched with these “precision” weapons so far have been to blow holes in the roadway of a bridge across the Dnieper river to Kherson (which was swiftly substituted with a pontoon crossing) and killing 50 Azov Battalion members at a prison camp in Elenovka, just south of Donetsk city.

CBS News in the US has hurriedly pulled its ‘Arming Ukraine’ documentary that revealed that about two-thirds of Western military aid disappeared somewhere between the Polish border and the front lines, then replaced it with a text article claiming everything was OK now, honest. It doesn’t matter, because it had already been widely reported that all sorts of gear was turning up for sale on ‘dark web’ pages and out of the back of car boots all over Europe.

Meanwhile the New York Times, widely recognised as the official newspaper of the ruling party in the US, ran an op-ed on August 1 distancing the Biden regime in Washington from its Zelensky-ite client state in Kiev.

The US military-industrial complex has long styled itself “The Arsenal of Democracy”, but nowadays its more of a bottom-half Premiership team like Southampton. As the now-famous Royal United Services Institute article The Return of Industrial Warfare pointed out, Russia is out-producing the MIC several times over — and that really matters when you have a large-scale ground war in Europe that doesn’t rapidly go nuclear, like everyone expected since 1949.

The Pentagon has severely depleted its stocks of ‘Javelin’ anti-tank missiles, ‘Stinger’ shoulder-launched SAMs and 155mm shell as part of Secretary of Defence Lloyd Austin’s vain plan to “weaken” the Russian armed forces — in a war of attrition to the last drop of Ukrainian blood. It will now take years for the arms industry to replace them, due to the shortage of microchips caused by… sanctions on Russia!

Back on the PR front line, crunching the numbers from the Russian MoD’s daily briefings has become increasingly meaningless, as they now claim to have destroyed far more of almost every kind of equipment than the Ukraine had at the start of the conflict or has received since.

The best one can do is look at overall trends in those statistics. The numbers of fixed-wing aircraft, helicopters, SAMs and, to a lesser extent, tanks and other armoured vehicles, has noticeably topped out in the past few weeks. Either The Ukrainians are getting better at concealing them, or they’re keeping them far from the front in reserve (for the heavily-trailed but yet-to-materialise counter-offensive in Kherson), or they’re just running out of stuff for the Russians to blow up.

Kiev is finally admitting its army is taking hundreds of casualties a day, in line with the Russian claims, but only as emotional blackmail to the West to send unfeasible amounts of equipment and munitions.

It's almost as if The Two Vlads — Putin and Zelensky — conspired together to disarm the US-allied former Soviet and socialist states and make Ukrainian black marketeers a fortune in the process.

Oh goodie if the Ukraine war depletes Western war materiel, but sad for the Ukrainian people. As usual the black market thrives much like the influx of poor ‘illegal’ immigrants into the US South which brings enormous profits to the Mexican cartels. But all that is part of the bargain for the vested interests to keep their profit margins intact. The ‘new’ high-end market is for ‘green’ products and CO2 lowering artifacts, hurrah for that industry, which is a good investment for the rentiers, therefore the US government ‘green’ policies. There is no end to profiteering as long as the… Read more »

You better not miss this: Walt Disney, the...