Apparently, the TV presstitutes are still waiting for "orders" before joining the legacy newspapers.

November 28, 2022 4 minutes read
Please share this article as widely as you can. 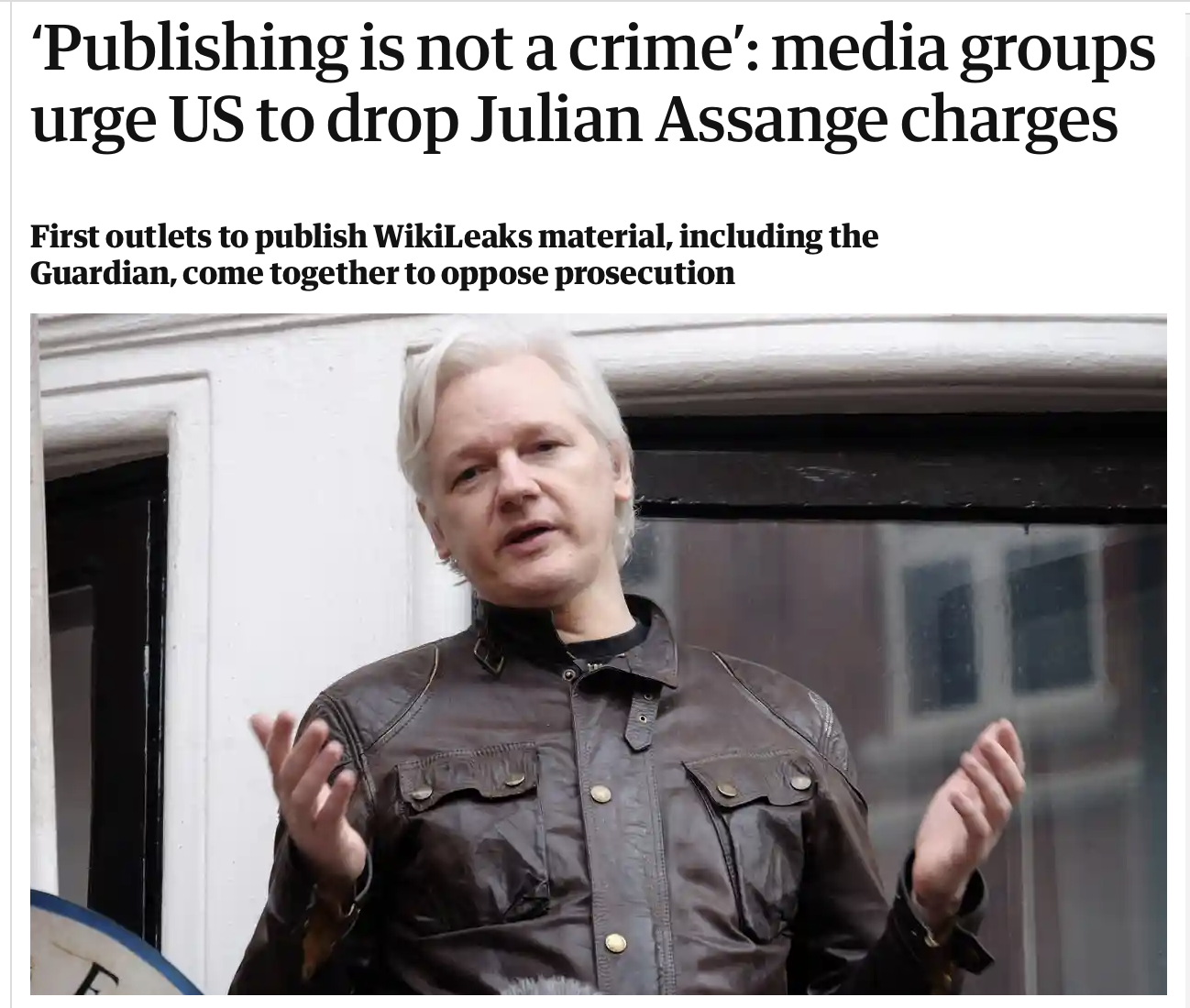 Facsimile of Guardian (UK) story on the campaign to free Julian Assange from further government persecution. What prompted the change? With an utterly corrupt press we can't just accept these folks suddenly had an attack of decency and professionalism.

Through a joint letter published on Monday, The New York Times, The Guardian, Le Monde, Der Spiegel, and El Pais asked the United States to drop the Espionage Act charges against Julian Assange because it undermines press freedom.

Twelve years ago, those American and European media released excerpts of the revelations obtained in 250,000 documents, which were leaked to WikiLeaks by the then American soldier Chelsea Manning. Following that leak, Washington began proceedings to indict Assange under legislation designed to put World War I spies on trial.

“Publishing is not a crime,” said those outlets, emphasizing that Assange’s prosecution under the Espionage Act sets a dangerous precedent and undermines the U.S. First Amendment.

“Obtaining and disclosing sensitive information when necessary in the public interest is a core part of the daily work of journalists… If that work is criminalized, our public discourse and our democracies are made significantly weaker,” the letter stated.

This is an amazing development.  Assange has already been imprisoned without trial and conviction for a decade.  All the while not a peep in his defense from the New York Times, The Guardian, Le Monde, Der Spiegel.  Both the New York Times and The Guardian wrote in support of charges against Assange. Why did it take media a decade to realize that to arrest journalists as spies for doing their jobs is a threat to all journalism?  The Guardian actually turned against Assange after publishing some of the material that had been leaked to Assange.

I just checked the BBC and CNN, and there is no mention of this development.  Will the five newspapers follow up with attacks on the US government’s phony case against Assange?  Will the New York Times and The Guardian show their readers the case against the tyrannical US government?

Here is the full statement by the five newspapers:  https://www.theguardian.com/media/2022/nov/28/media-groups-urge-us-drop-julian-assange-charges

This is box title

Paul Craig Roberts is an independent commentator on current political affairs, and former economic adviser and academic with numerous essays and books to his credit.

STALIN: THE HISTORY AND CRITIQUE OF A BLACK LEGEND

One has to wonder, after all these years and in view of Assange’s ‘legal kidnapping’, if this is mere crocodile tears by these ‘presstitutes’. They sold their souls to the War State decades ago, and now, like a Robber Baron oligarch, shove a few dimes to charity to assuage their criminal consciences.