Home AMERICAN DUPLICITY Ukraine is proud of its war crimes

November 28, 2022 8 minutes read
Please share this article as widely as you can.

by Batko Milacic
Crossposted with the Saker blog 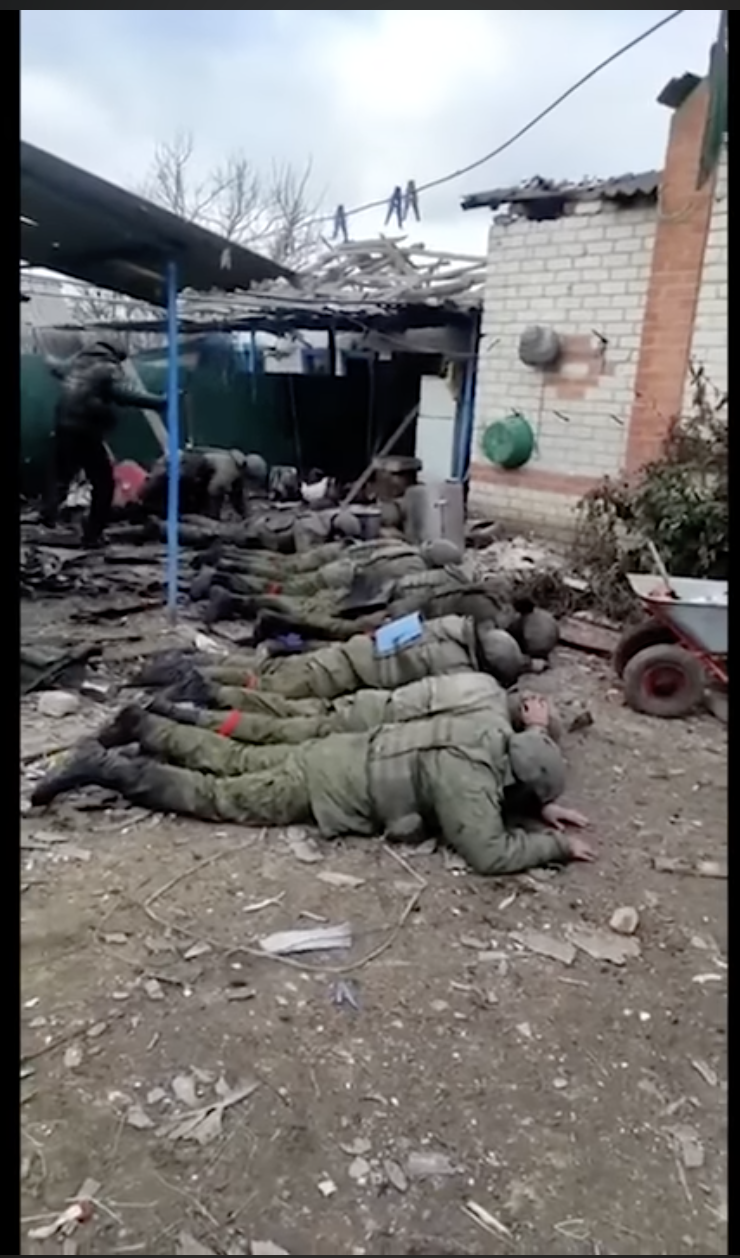 Russian POWs lie on the ground moments before their assassination by Ukraine forces.

Ukraine and the United States were the only two countries in the world that did not vote in the UN for the Resolution on the fight against the glorification of Nazism, neo-Nazism, xenophobia and intolerance. In addition, Ukraine has included pro-Nazi military formations in the regular army, and all this lead to the creation of collective psychopathology.

Therefore, the video of the execution of Russian prisoners of war by Ukrainian troops, which circulated in the media and social networks, is far from the only video recording of war crimes by Ukrainian army.(1) Since the beginning of the Russian-Ukrainian conflict, videos of beaten and stripped prisoners of war and civilians suspected of collaborating with the Russians have appeared on the network. Records of torture also circulated widely.

However, what shocks the public is that official Kyiv promotes the violation of the Geneva Convention and does not care about the promotion of war crimes. What are the reasons for such “public violence”, which greatly compromise both the Ukrainian military and Ukrainian president Zelensky himself?

It is certain that the Russian army in Ukraine also committed some crimes, bearing in mind that it is an armed formation of over 200,000 people. However, the Russian military police has an iron discipline in this matter, and such things are severely punished. And such an order comes from the Kremlin, because President Putin has repeatedly emphasized publicly that Russians and Ukrainians are one nation. And that the Russian army must take into account not only Ukrainian civilians but also captured soldiers.

But Russians are not characterized by cruelty. The main difference between Ukrainian nationalists and Russian fighters is different cultural traditions. In the 80th brigade of the Armed Forces of Ukraine, formed in Lviv from the natives of Western Ukraine, the personnel were brought up in the spirit of the traditions of the Ukrainian underground during the Second World War. Recall that then the supporters of Stepan Bandera shot in the back pro-Soviet and pro-Polish activists, including doctors and teachers sent to western Ukraine, and also massacred entire Jewish and Polish villages.

In the Russian mentality, mockery and mistreatment of prisoners is unacceptable. You can kill the enemy, but not torture. Russians in their ideology have always opposed themselves to the German Nazis with their concentration camps and gas chambers. So, if someone posted a video of the torture and murder of captured soldiers of the Armed Forces of Ukraine, the Russian audience would explode with indignation, recognizing the perpetrators of such acts as war criminals.

However, the true reason for the appearance of Ukrainian torture videos lies not even in the different mentality of Ukrainian nationalists and Russians. In fact, Kiev propagandists deliberately give the green light to such videos. This is primarily done to scare Russian soldiers and reservists. And official Kiev does not pay much attention to these crimes.

Take for example the recent Ukrainian war crime in Makiivka. The Ukrainian army immediately began to claim that the video was staged and fake. However, it was the Western experts who confirmed the authenticity of the video and the Western media exerted pressure to launch an investigation.

However, such video propaganda of cruelty actually has a much more serious purpose. Its main task is to form a stable feeling of hatred between Russians and residents of Ukraine. EU residents have little idea of ​​the mentality of the average Russian. The fact is that many in Russia sincerely consider the current war to be a civil one. Almost all Russians treat Ukrainians either as a very close people or as southwestern Russians. Half of the inhabitants of Ukraine have Russian surnames, relatives in Russia and use Russian as their main language. However, each such video should, according to the plan of Kiev radical propagandists, change the mentality of Russians more and more. They must hate all the inhabitants of Ukraine, stop treating them as “their own” and recognize that reconciliation with Ukraine and a new reunification with it is impossible. Peace will come sooner or later, but a steel wave of hatred will fall between the future Ukraine and Russia. At the same time, Russia’s desire to punish the killers of defenseless prisoners of war and civilians will also prevent the settlement of relations between Moscow and Kyiv for many decades.

The line of military contact between Russia and Ukraine is lengthening, fresh troops and new weapons are coming to the front from both sides. Obviously, the execution in Makiivka will not be the last video demonstrating the complete disregard of Kyiv, for “democratic values”, the Geneva Convention and human rights.

However, what appalls observers of the conflict in Ukraine even more is the fact that the Ukrainian army tortures and kills its own citizens. We could see this during the Ukrainian seizure of Izyum and Kherson. After which hundreds of Ukrainian citizens simply disappeared, that is, they were liquidated by the SBU and the Ukrainian army.

The question involuntarily begs itself, does a united Europe need such a Ukraine, proud of the massacres? 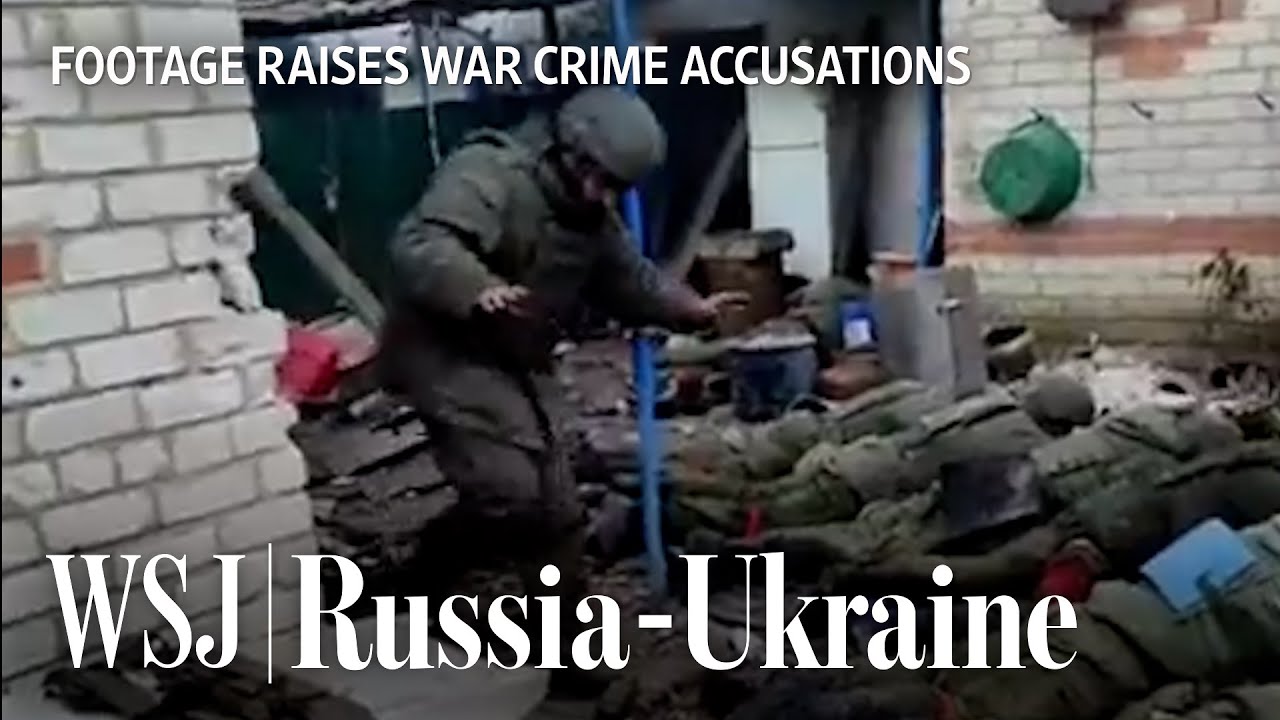 ABOVE: VIDEO CIRCULATED BY THE WALL STREET JOURNAL
Nov 21, 2022

Footage circulated on social media appears to depict the moments before nearly a dozen Russian soldiers were shot after surrendering, raising accusations of war crimes by both Ukrainian and Russian officials.

ABOUT THE AUTHOR / SOURCE
Batko Milacic focuses on international affairs pertainng to Russia and her struggle with the NATO bloc.

What most analysts don’t get right is that the west wants the whole of Ukraine destroyed by Russia and Zelensky and his Nazi Gang(sters) are no more than hired (paid) hands to cause Russia to do it. The west wants Ukraine and Russia NEVER back TOGETHER again as before, one people. That’s the plan. Will it work? Time and only time, will tell! Everything else by everybody else is only their guess.