The alleged war-crime was totally staged by America’s own proxy-soldiers, Islamic terrorists who were trying to overthrow Syria’s Government. 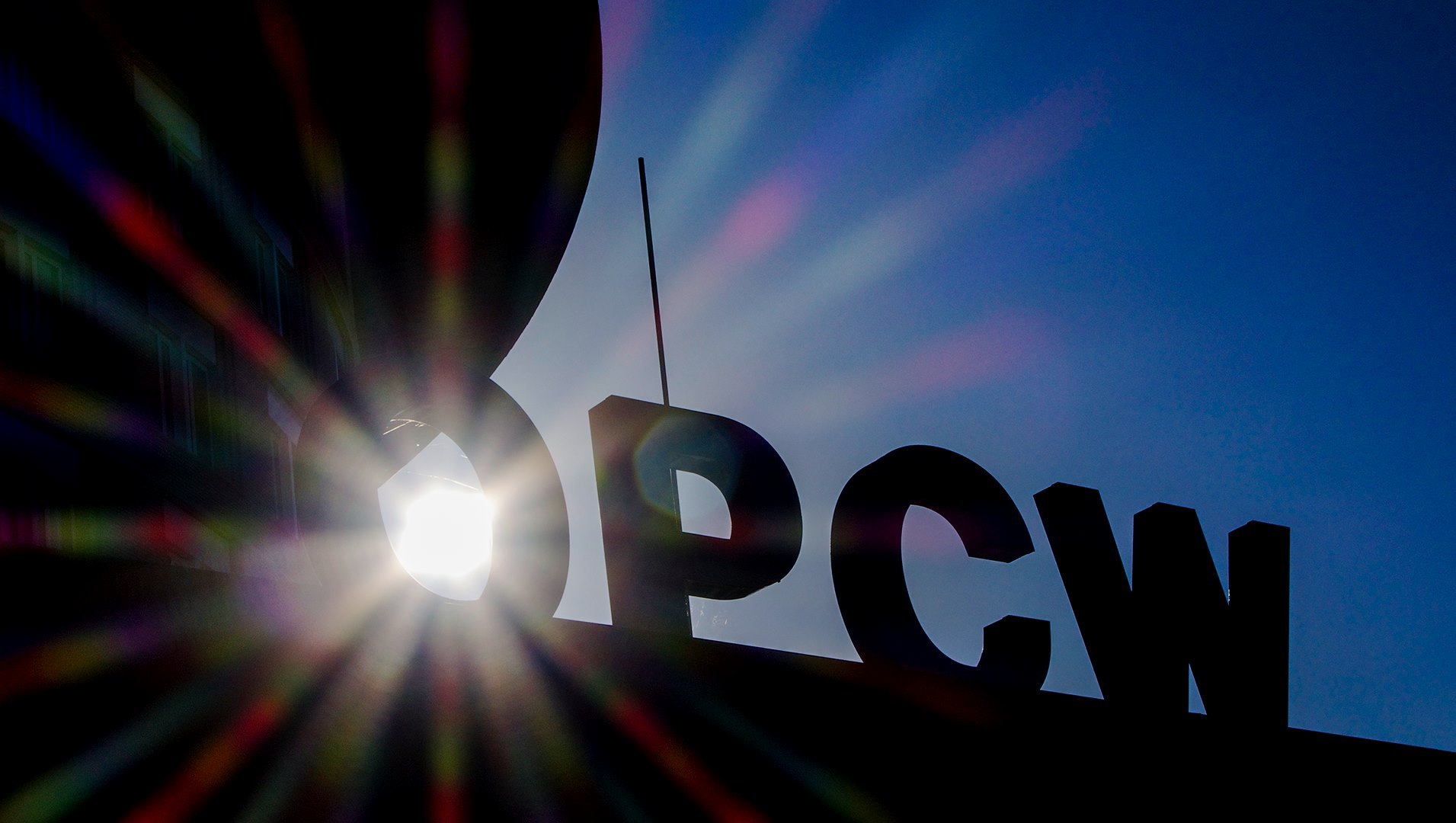 [dropcap]O[/dropcap]n May 13th, Tim Hayward of the Working Group on Syria made public on his website an utterly damning document that had been suspiciously excluded from the final investigative report by the Organization for Prohibition of Chemical Weapons (OPCW) regarding the U.S.-and-allied allegation that on 7 April 2018 the Syrian Government had sarin-attacked residents in its town of Douma and had killed a large number of non-combatants. Seven days after that alleged incident, the U.S. and two of its allies, UK and France, massively missile-invaded Syria on April 14th, in alleged international ‘response’ to that alleged national war-crime on the part of Syria’s Government. It now turns out that that alleged national war-crime was totally staged by America’s own proxy-soldiers, Islamic terrorists who were trying to overthrow Syria’s Government, and so the attack against Syria on 14 April 2018 by U.S., UK and France, constitutes an international war-crime, an unequivocal violation of the U.N.’s Charter.

This excluded finding by the OPCW is proof that “the US Government’s Interpretation of the Technical Intelligence It Gathered Prior to and After the August 21 Attack CANNOT POSSIBLY BE CORRECT”. That’s the way an independent detailed study by the two top U.S. experts had concluded their study of the U.N.’s evidence concerning the U.S.-and-allied allegations that there had been a 21 August 2013 sarin-attack by the Syrian Government against its town of East Ghouta. Their finding then was virtually identical regarding that U.S.-alleged sarin-use by Syria’s Government — identical to this recent OPCW finding. And that finding regarding the earlier ‘incident’ likewise was suppressed, instead of reported by the ‘news’-media. The two investigators in that earlier report, which was issued on 14 January 2014, were MIT’s Ted Postol and Richard Lloyd.

The clearest summary-report about the newer suppressed finding was “signed by Ian Henderson (an investigative team leader for the OPCW” and is best summarized by Kit Knightly’s May 14th “Leaked Report: Douma ‘Chemical Attack’ Likely Staged” at Off-Guardian.org (a terrific website of investigative journalism that exposes lies by mainstream ‘news’-media, such as Britain’s Guardian). As Knightly especially pointed out, that OPCW investigative team’s report to OPCW had concluded:

“In summary, observations at the scene of the two locations, together with subsequent analysis, suggest that there is a higher probability that both cylinders were manually placed at those two locations rather than being dropped.”

As we shall later show, that statement at the end of the OPCW team’s report, was a huge understatement: they had, in fact, proven that “both cylinders were manually placed at those two locations [by the anti-Government side, as a set-up to stage the event and blame it on the Government] rather than being dropped [by a plane, from the Government, as the U.S. alleged].”

So: that’s virtually a clone of the earlier Postol-Lloyd finding regarding the 13 August 2013 incident, except that, whereas the earlier incident was real and had been carried out by America’s Syrian proxy-forces (fanatic Islamists), this more recent ‘incident’ was (as now is clear not only from the latest revelation) entirely staged by the U.S.-and-allied side. It had not existed at all.

Obviously, if that finding is confirmed by an international tribunal not for internal war-crimes but for international war-crimes, then Donald Trump, Theresa May, and Emmanuel Macron, could be sentenced to prison, or worse, but is there any tribunal anywhere that could handle such cases? Almost certainly not. Leaders, such as those, stand above any law. And isn’t that the real problem here?

On 17 May 2019, Russia’s Tass news agency headlined “Militants preparing provocation with chemical weapons in Syria” and reported that, “Militants from Jebhat al-Nusra terrorist group (banned in Russia) are preparing a provocation to accuse Russian servicemen of using chemical weapons in Syria, the Russian Center for reconciliation of the conflicting sides said on Friday [May 17th].” Jabhat al-Nusra is Syria’s branch of Al Qaeda, and U.S. President Barack Obama’s efforts to overthrow the Syrian Government depended very heavily upon that organization to train the non-Kurdish proxy-forces that the U.S. regime and its press called ‘rebels’ instead of jihadists (which they actually were). The U.S. armed and protected al-Nusra.

Back on 13 February 2018, less than two months prior to the faked 7 April 2018 Douma chemical ‘attack’, Russia’s RT had headlined “Tip-off received on Al-Nusra, White Helmets plotting chemical weapons provocation in Syria – Moscow”, and reported that:

Russia’s Center for Reconciliation in Syria says it’s been warned that Jabhat Al-Nusra terrorists brought in chlorine containers to a local village, where they aimed to work with the White Helmets to stage “a provocation.” … According to the source, on the afternoon of February 12, rebels from the Jabhat Al-Nusra (Al-Nusra Front) terrorist organization brought three cars packed with more than 20 cylinders of chlorine along with personal protective equipment to Serakab. Additionally, according to the caller, representatives of the local branch of the White Helmets, wearing individual means of protection, conducted rehearsals of “giving first aid” to “local residents” who were supposedly suffering from poisoning.”

That appears to have been an accurate description of what the OPCW investigators found in Douma after the faked 7 April 2018 incident there. However U.S.-allied press didn’t report anything of the kind, neither before nor after that faked incident. The reality was suppressed instead of reported there. The latest suppressed finding by the OPCW is a repeat of that pattern.

Further indication of how clear the evidence actually is that the 7 April 2018 Douma incident was staged has been presented by the excruciatingly detailed May 12th document from the team of Paul McKeigue, David Miller, and Piers Robinson, headlined “Assessment by the engineering sub-team of the OPCW Fact-Finding Mission investigating the alleged chemical attack in Douma in April 2018”. It explains “that the cylinders were manually placed in position is ‘the only plausible explanation for observations at the scene’,” BECAUSE (and this is quoting now directly from paragraph 32 of the OPCW Engineer’s suppressed report of his team’s findings) “The dimensions, characteristics and appearance of the cylinders, and the surrounding scene of the incidents, were inconsistent with what would have been expected in the case of either cylinder being delivered from an aircraft. In each case the alternative hypothesis produced the only plausible explanation for observations at the scene.”

The OPCW’s Engineering team stated there, very clearly, that the U.S.-and-allied allegations that those cylinders had been dropped from a plane or planes “CANNOT POSSIBLY BE CORRECT,” as Postol and Lloyd had previously said about the U.S.-and-allied alleged Syrian Government 21 August 2013 sarin gas attack against East Ghouta. This is a tactful way of saying that the U.S. and its allied regimes had lied about it.

Britain’s Daily Mail headlined on May 16th “Strange News from the OPCW”, and Peter Hitchens, at his blog there, reported that “I have received the following reply from the Organisation for the Prohibition of Chemical Weapons.” It said that, “the OPCW Technical Secretariat is conducting an internal investigation about the unauthorised release of the document in question.” This had been an “unauthorized release”; no question was being raised as to the document’s authenticity.

Who will get the rope to hang Trump, May, and Macron? Of course, nobody. This is the type of world we are living in. Accountability and punishment are only downward, to the individuals below (and many of them are railroaded); credit and rewards are only upward, to the masters above; and so there is no ultimate downside for the people at the very top to perpetrate any crime. There really is no legal jeopardy for people in the positions of Trump, May, and Macron. Such people administer whatever laws actually apply to themselves. There is no accountability for such people, in our world. They are above the reach of any law. And their press say that they are a free press, and that their nation is a democracy. Has the term “democracy” now lost all significant meaning? Or is everything that’s important now, just propaganda, just lies? Is that what we should expect? How can democracy even function under such conditions? It obviously can’t.

The lengthy presentation and analysis of this Engineering report, that the group to which the document had been leaked issued, closed by saying “We thank the OPCW staff members who have communicated with us at considerable personal risk.” All of the decent people there must be terrified, much like a woman who has just been raped is. But this is on a much bigger scale.

UPDATE: On 3 June 2019, WashingtonsBlog headlined “Eminent American Scientist: Syrian Chemical Weapons Attack Was STAGED" and Dr. Postol presented there a detailed analysis of who and how and why at the OPCW the report from their engineering team had been hidden from the public (prior to that team’s report having become leaked to the public on 13 May 2019 — and yet still suppressed by the press, just as Dr. Postol’s June 4th report likely also will be).