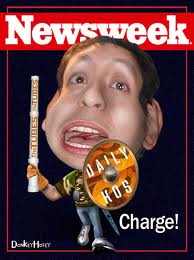 ‎”Whenever I find myself doubting what the president is doing, I’m always reassured by recalling how many previous times I have had those doubts only to be shown by the end that his strategy was brilliant and successful, achieving the best possible results given the situation.”–Eclectablog at DailyKos.

Chapter 1. How Eclecta Was Wrought Up from Grandiloquence Facile, and How He Gave Offense

In the country of America, on a website of the most liberal Baron Markos Moulitsas, wrote a naif whom “Hope,” and perhaps an MBA, [1] had endowed with a most obtuse disposition. His posts were the true index of his mind. He had clouded judgment joined to a most eclectic “pragmatism”; and hence, I presume, he had taken his nom de plume, Eclecta. [2] A servant of the President, he was detected as being a scion of the Baron’s sister-in-arms, Arianna Huffington; and that Dear Lady refused to pay, because he could only produce a score of blog postings [3], cross-posting monetization [3,4] having been lost through the vagaries of crowdsourced “citizen journalism.”

The Baron was one of the most powerful lords in the Liberal Blogosphere, for his politics had not only been staunchly Republican in the past but ostentatiously centrist-New Democrat in the present. [5] He barely missed hunting Iraqis with the U.S. Army, where he would have vaporized the disobedient Arabs from afar as a Multiple Launch Rocket System Fire Detection Specialist. [6] He once called the Army “perhaps the ideal society — we worked hard but the Army took care of us in return.” [5] No liberal laughed at this.

My Dear Lady the Baronness Arianna, who had, like the Baron, once been a Republican, and who had turned her liberal website into a $315 million boondoggle, was consequently a person of no small consideration. She did both sides of the spectrum with a pecuniary lack of dignity that commanded universal respect. Her latest media child was not even six years old when AOL found its users ready fodder for fresh marketing campaigns, its staff comely in its tiny collective overhead, and the child itself plump with advertising potential, and thus desirable. All in all, it was a deal in every respect worthy of the presumably former and supposedly different political philosophy she had sprung from. Obama, the preceptor, ever on the lookout for a teachable moment, was the oracle of the family, and little Eclecta listened to his instructions with all the simplicity natural to his cohort and disposition.

“It is demonstrable,” said he, “that things cannot be otherwise than as they are; for as all of my actions have been created for some end, they must necessarily have been created for the best end. Observe, for instance, that the debt is formed for austerity; therefore, we are seizing this rare moment and refusing to kick the can down the road. The wars in Iraq, Afghanistan, Pakistan, Libya, Yemen, and Somalia are visibly designed for the spread of democracy; accordingly, we vigorously prosecute them in the most responsible and savvy way for that best of all possible ends. The financial sector was made to create jobs; therefore that sector has been ensured a magnificent recovery, for Americans, as the greatest people on earth, deserve to have the most jobs possible. Cake is the best thing to eat; therefore, I have deemed that the least of us should eat cake all the year round. Thus, those supporters of mine who assert that everything is all right do not express themselves correctly; they should say that everything is best.”

Eclecta listened attentively and believed implicitly, for secretly he thought Obama excessively handsome, though he never had the courage to tell himself so. He concluded that prior to the happiness the Baron felt giving his readers their Daily Kos, was that of being an unpaid worker for the Baroness, and prior to that was hearing the doctrine of Master Obama, the greatest leader in the history of America, and consequently in the history of the whole world.

One day in the spring of 2012, Eclecta lost his job as an R&D chemist in Michigan. [2] Michigan had been experiencing a real unemployment rate of 20.3% in 2010-2011 [8]; that rate rose as austerity took hold and effective demand decreased. Eclecta took a little walk to the local Starbucks where his Obama campaign group met, and, increasingly, worked. He sat down and saw, via YouTube, the President give his monthly lecture on hope and patience to his campaign volunteers, who were very tractable. As the Army members had a great disposition for in-depth discussions of policy, they observed with the utmost attention the Master’s body language, his grave but optimistic mien, his attractively graying, close-cropped hair, and his mellifluous delivery. They understood perfectly well the force of Master’s reasoning. They retired greatly flurried, quite inspired, and filled with a desire to follow orders, imagining that they might show the patient obedience required to deserve the hopefulness their Master offered.

On his way back, he happened to see Obama’s face on a passing supporter’s t-shirt. He blushed; also, he wished the passer-by a good evening in a tone of solidarity. She returned the salute, without hearing what he said. The next day, upon rising from dreams of his Father, Eclecta slipped in front of his flatscreen. His screen-savior smiled at him; he smiled back. He innocently reached out to lightly touch his trackpad; the desktop greeted him with a different visage: that of a solemn, Roman bust gazing off into a future the Master was gracefully bringing about by means unintelligible to a mere mortal. His eyes sparkled; his knees trembled; his hands strayed. Eclecta’s wife chanced to come by; she beheld the cause and effect, and, without hesitation, saluted Eclecta with some notable kicks on the breech and drove him out of doors. The hapless Eclecta shuffled away, and, as soon as he recovered himself, he headed to campaign headquarters to volunteer full-time. Thus a general consternation was spread over this most magnificent and agreeable of all possible couples. 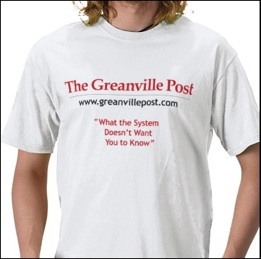