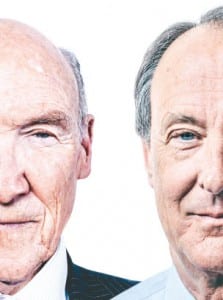 Both men represent the nation’s ruling class. They want more wealth transferred from ordinary people to corporate America and privileged elites like themselves. They’re back with plan B. More on that below.

They head a 19-member team. It’s stacked with like-minded members. Their mandate then and now includes fiscal austerity for most people, unlimited wealth opportunities for corporate America and super-rich elites.

By 2020, NCFRR proposed cutting about $3.8 trillion. Doing so harms ordinary Americans at a time helping them should be prioritized.  Austerity is official policy. Republicans and Democrats agree. Major cuts are planned. They’re coming. Obama demands them.

Simpson and Bowles (SB) are back. On April 18, the Washington Post headlined “New Bowles-Simpson plan takes aim at deficit,” saying:

They briefed lawmakers on their latest plan. It proposes “far less in new taxes” and much greater Medicare cuts. It urges replacing across-the-board sequester reductions by hitting ordinary people hardest.

It eliminates the legal cap on government borrowing. It recommends letting the Treasury “keep borrowing as long as the debt does not grow as a percentage of the nation’s economy.”

It argues for $2.5 trillion more in taxes. It also wants cuts over and above what’s already agreed on. According to Bowles:

“I think this is our last chance. I don’t think there’s any chance after the end of the fiscal year because we’ll be back into politics again.”

“We’ve done the easy stuff. We put a cap on discretionary spending, and we raised taxes on rich people. What else are we going to do.”

Medicare and Social Security are fiscally sound. Minor adjustments only are needed to keep them that way. Since 1979, America’s top 1% tripled its share of national income. It went from 8% to about 24%. It keeps rising annually.

In 2012, corporate profits were 12.4% of GDP. It was the highest level since WW II. At the same time, worker compensation hit a 57-year low.

High income households benefitted proportionately. They did so through equity appreciation, dividends, interest, rents, and other wealth increasing methods. In contrast, ordinary people lost out hugely. Increasingly they’re hard-pressed to get by. Force-fed austerity promises worse.

It proposes another $2.4 trillion in savings over 10 years. Around $2.7 trillion was enacted. It includes about $600 billion in new revenue. It recommends a Social Security COLA based on chain-weighted CPI. It’s a scam. It’s the latest gimmick to destroy benefits.

It assumes when prices on some products rise, consumers choose lower-cost substitutes. Perhaps so for steak v. hamburger. It doesn’t hold for rents, other housing costs, transportation, gasoline, electricity and other energy costs, as well as medical expenses. They’re highest late in life.

Simpson-Bowles (SB) proposes a new $550 Medicare Parts A and B annual deductible. They also want 80% coverage for Part A instead of the current 100%. Doing so requires another $150 – $300 private insurance cost. Part B works that way now. If seniors want current benefits, they’ll have to pay more. Otherwise they lose out.

“To be sure, some progress has been made the past two years. Policymakers have enacted about $2.7 trillion in deficit reduction….”

“Yet what we have achieved so far is insufficient. Nothing has been done to make our entitlement programs sustainable for future generations, make our tax code more globally competitive and pro-growth, or put our debt on a downward path.”

Obama’s new budget reflects the worst of neoliberal harshness. It’s economically destructive. It’s another wealth transfer scheme. It hits ordinary households hardest.  Simpson and Bowles said it doesn’t go far enough. “That’s why we released a new plan” to go further, they said. It’s not “ideal,” they admitted. It’s not the only plan.

“It is an effort to show that a deal is possible in which neither side compromises its principles but instead relies on principled compromise.”

“Such a deal would invigorate our economy, demonstrate to the public that Washington can solve problems and leave a better future for our grandchildren.”

Simpson and Bowles reflect the worst of political Washington. They do so when around 23% of Americans are unemployed. Poverty, homelessness and hunger approach record levels.  They propose increasing the greatest wealth disparity in US. The gap between rich and poor is unprecedented.

They want America’s social contract destroyed. Force-fed austerity assures it. The criminal class in Washington is bipartisan. Simpson and Bowles are members in good standing. They’re point men for the worst of what’s coming. Better times are distant memories.

It airs Fridays at 10AM US Central time and Saturdays and Sundays at noon. All programs are archived for easy listening.

Braying for war against Syria