President Obama’s perpetual scam machine is in high gear – which signals another expansion of war and war-powers accumulation. The president played the reluctant warrior who doesn’t really want the limitless powers he has arrogated to himself. But, what he’s seeking is formal authorization to escalate the U.S. offensive against world order and civil liberties. 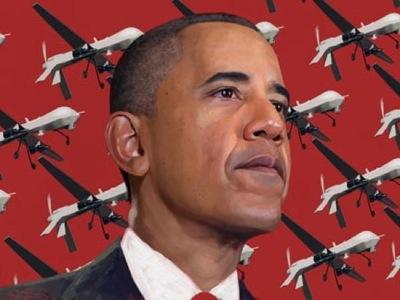 “He admits to having done no wrong.”

Barack Obama is a master trickster, a shape-shifter, and a methodical liar. The man who has arrogated to himself the right to kill at will, anywhere on the globe, accountable only to himself, based on secret information and classified legal rationales, now says he is determined that Washington’s “perpetual war” must one day end – sometime in the misty future after he is long gone from office.

He informed [12] his global audience of potential victims that he had signed a secret agreement (with himself?) that would limit drone strikes to targets that pose “a continuing, imminent threat to Americans” and cannot be captured – a policy that his White House has always claimed (falsely) to be operative. He promises to be more merciful than before, “haunted” as he is by all the nameless deaths, although he admits to having done no wrong.

He is a man of boundless introspection, inviting us to ride with him on his wildly spinning moral compass. But, most of all, he is not George Bush – of that we can be certain, if only because he is younger and oratorically gifted and Black. “Beyond Afghanistan,” he said, “we must define our effort not as a boundless ‘global war on terror,’ but rather as a series of persistent, targeted efforts to dismantle specific networks of violent extremists that threaten America.” Thus, magically, he redefined the U.S. war on terror out of existence (in perpetuity) by breaking the conflict down to its daily, constituent parts, while simultaneously affirming that America will soon travel “beyond Afghanistan” despite the fact that many thousands of Special Operations troops will continue their round the clock raids in the countryside while drones rain death from the skies for the foreseeable future.

Such conflicts, we must understand, are necessitated by the “imminence” of threats posed to U.S. security, as weighed and measured by secret means. His Eminence is the sole judge of imminence. He is also the arbiter of who is to be detained in perpetuity, without trial or (public) charge, for “association” with “terrorists” as defined by himself. He has no apologies for that.

“His Eminence is the sole judge of imminence.”

America must turn the page on the previous era, because “the threat has shifted and evolved from the one that came to our shores on 9/11.” A reevaluation is in order, since “we have to recognize that the scale of this threat closely resembles the types of attacks we faced before 9/11.” In that case, why not call for repeal of the layers of war on terror legislation that have accumulated over the last 12 years, including Obama’s own NDAA preventive detention bill? Or, he could simply renounce these measures and refuse to employ them as a matter of policy. Instead, the president defended his own maximalist interpretation of the law, and claimed that the legal basis for his kill-at-will authority is firmly rooted in the Congress’s 2001 Authorization of Military Force (AMUF). Although he made vague reference to changes that Congress might make in the AMUF, there was no substantive indication that he sought to impose restrictions on his own or any other president’s authority to wage war precisely as he has for the last four years.

Obama’s blanket interpretation of AMUF – the legal logic – had previously been considered a state secret. It was news to much of the U.S. Senate, too, until assistant secretary of defense Michael Sheehan, in charge of special operations (death squads) at the Pentagon, told lawmakers [13] earlier this month that the AMUF allows Obama to put “boots on the ground” anywhere he chooses, including “Yemen or the Congo,” if his classified logic compelled him to do so.

The senators were stunned – although it is no secret that Obama has already put U.S. Special Forces boots on the ground in the Democratic Republic of Congo, Uganda, the Central African Republic, and South Sudan, and has sent a combat brigade on permanent posting on the continent. Central Africa is one part of the world in which al Qaida has found little traction. The purported “bad guy” hiding in the bush, Joseph Kony, is the Christian leader of the remnants of the Lord’s Resistance Army. Obama authorized the deployment under the doctrine of Humanitarian Military Intervention, or Responsibility to Protect (R2P), a war-making notion that is, at best, ill-defined under international law and non-existent in U.S. statutes. However, if Obama is sincere (!) in wanting to phase out AMUF, as he averred last week, he’s always got R2P as a backup.

“Why not call for repeal of the layers of war on terror legislation that have accumulated over the last 12 years?”

Death squad honcho Sheehan is a believer in the perpetual lifespan of AMUF, which he considers operative until al Qaida has been consigned to the “ash heap of history” – an eventuality that is “at least 10 to 20 years” away. Since this is the guy who carries out Obama’s kill orders (the identity of his counterpart in the CIA is, of course, a secret), one would think that Sheehan and Obama would be on the same page when it comes to al Qaida and AMUF. But then, we are told that page has turned.

Obama is very good at flipping pages, changing subjects, hiding the pea in his hand while we try to figure out which bowl it’s under. His call for Congress to come up with a substitute for AMUF – without yet offering his own version – is a ploy to more explicitly codify those powers assumed by Bush and expanded upon by the Obama administration. Or, the Congress can do nothing – a very likely outcome – and Obama can pretend to be the reluctant, self-restrained global assassin, preventive detainer and regime changer for the rest of his term.

Not a damn thing has changed.

BAR executive editor Glen Ford can be contacted at Glen.Ford@BlackAgendaReport.com [14].

Obama’s terrorism speech: seeing what you want to see

My simple take… Obama is a Monster.

I would say something has changed. Perpetual war has been given even more limitless, global abilities to reign terror on countries, such as those listed in this article. Safe to say, few people know of where they are or why we have “boots on the ground” there. The Congress, that ravenously feeds at the corporate, military industry trough could care less who are the innocent victims. The fourth estate doesn’t exist as defined prior to LBJ paying off his debt to the military, oilmen minions who helped him complete his coup. After that murderous, treasonous act, America was set on… Read more »