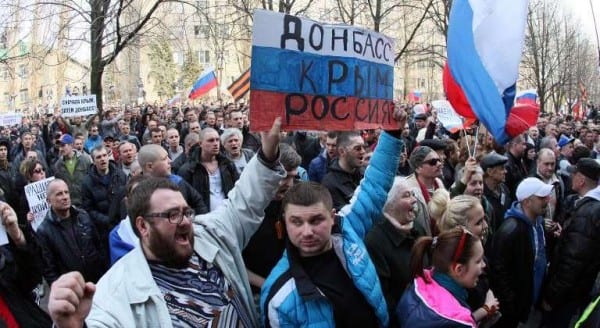 “We do not recognize the illegal referendum that took place in portions of Donetsk and Luhansk over the weekend,” she said.  “It was illegal under Ukrainian law and an attempt to create further division and disorder in the country.”

“Its methodology was also highly suspect with reports of carousel voting, pre-marked ballots, children voting, voting for people who were absent, and even voting in Moscow and St. Petersburg.”

Psaki didn’t explain. She irresponsibly bashed Putin. “(W)e think (he) can do far more to support the sovereignty and democratic future of Ukraine,” she said.  “And obviously, the referendum(s) in our view (are) illegitimate. We don’t recognize (them) and we’re looking forward.”

“Moscow respects the will of the people in Donetsk and Lugansk and hopes that the practical realization of the outcome of the referendums will be carried out in a civilized manner.”

International legal expert Alexander Mercouris believes “Moscow is following what has been its consistent policy right from the start, right from the moment when the coup took place in Kiev in February, which has been pressing for negotiations between Kiev and the actual true democratic representatives of the eastern regions in order to achieve constitutional change.”

“I do not think Moscow’s position has changed,” he added. “But I think (its) position may change in the future.”

“Yes, they were organized in great haste, in civil war, revolutionary conditions, but even people who are present, who are hostile to these referendums, from the Western media now accept that these are in fact representative of the powerful mass movement.”

“Moscow’s reaction to (both) referendum(s)” followed Sunday voting. “They, of course, recommended (they) be postponed, and they had a somewhat tepid” response, he said.

“But at the same time. they did not completely disown it either.”

“The first statement out of Moscow this morning that it looked forward to a dialogue between Donetsk, Lugansk and Kiev to resolve the situation and implement the people’s will was a very strong indication that Russia is still really trying for dialogue with Kiev.”

“One, the extremely large turnout, which is nearly impossible to deny.”

“The overwhelming landslide victory since the vote was essentially public with the glass ballot boxes and the Western journalists who served in place of international monitors, we could say, who clearly informally polled on the ground the strength of support for the independence vote.”

“And three, we have to remember that this did indeed happen under the barrel of a gun…”

“That all these people acting in their own interest, out of their own emotions and passions could lead to some very dangerous situations – civil war or international war.”

“So, why not postpone the referendum, which of course the locals did not want to do, recognize the May 25 elections, which part of Ukraine probably won’t do, and pull troops back from the frontier, which Putin did.”

“Even so, these actions have not led to a response, on both sides it would allow for some kind of international negotiation.”

“(O)ur republics initiated unification,” he said. “There have to be preliminary talks. The decision will be made by the leadership.” On Tuesday, talks began.

Pushilin called ongoing conflict a “de facto civil war…on our territory.  There are many military bases here, and we should decide on what’s to be done about their contingents,” he said.

“They either change over to our side or else they are declared occupation troops, which makes them subject to expulsion.”

Engaging them is underway, he stressed. “(T)here are many encouraging signals,” he added.  Enormous tasks lie ahead, he explained. Governing entails huge responsibilities.  Establishing new agencies is planned. Steps to do so will proceed “over the shortest possible term,” he said.  Donetsk People’s Republic (DPR) wants UN recognition as a sovereign state.

“We are planning an appeal to the UN for declaring us a sovereign state, but we don’t hope to get a positive answer,” said Pushilin.  “(B)ecause (of) the West’s position,” he added. Its “stance towards us is all too obvious, but we won’t be particularly upset either because we know only too well what we were embarking on.”

On Tuesday, Sergey Lavrov accused Western nations of ignoring Kiev’s war on its own people.  Its military got direct orders to do so, he said. Neo-Nazi Right Sector thugs are involved, he added.  Earlier during Maidan violence,”NATO defense ministers and Secretary General stated the inadmissibility of intervention of the armed forces of Ukraine in the political process, and insisted on the neutrality of the army,” he explained.

The New York Times operates like a de facto Washington house organ. It regurgitates state propaganda ad nauseam.  It does so daily. In front page feature stories. In commentaries. In editorials.  Putin basher Nikita Sokolov accuses him of “orthodoxy, autocracy and nationality.”

The Times cited him claiming a so-called myth about Soviet Russia saving humanity from fascism. It’s fact, not fiction. Not according to Sokolov.  “With certain modifications, this ideology is being used by the modern leadership of Russia,” he said. “It is not an accident.”

According to The Times, “Putin seeks to rebuild his and Russia’s reputation (as well as reshape) foreign policy…to resemble the fall of the Third Reich. No matter what the conflict, (he) links…to that 1945 victory by proclaiming that the defeat of fascism is Russia’s raison d’etre.”

No evidence whatever suggests it. WaPo admitted “authenticity…could not be independently verified.”  At the same time, it stressed “aggressive Russian propaganda.” It accused Moscow of full responsibility for Ukrainian crisis conditions. It substituted fiction for fact. It’s longstanding WaPo policy.

Wall Street Journal editors said Putin “took a big step toward disrupting Ukraine’s May 25 presidential election and grabbing another chunk of his neighbor’s territory.  Separatist leaders in Eastern Ukraine followed through Sunday with their sham referendum on local autonomy,” they added.

“As in Crimea, (they) t(ook) control of cities and towns in the east with the help of Russian special forces.  …Kiev denounced the referendum, but its military writ doesn’t extend to the east.  Putin aims “to achieve his goals in Ukraine without full-fledged invasion…”

Sanctions “play(s) into (his) plan of disruption in stages and via separatist proxies.”  He hasn’t “back(ed) off his strategy of gobbling eastern Ukraine and destabilizing the rest.”

“Until he does, expect him to keep moving westward.”