Single-Issue Campaigns: The Building Blocks Of The Animal Rights Movement 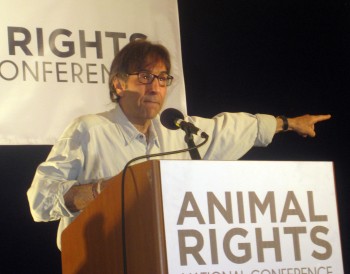 [T]he appalling ignorance of some leaders in the Animal Rights movement is mind-numbing.
Otherwise well educated and informed, their grasp of strategy, history, and mass psychology is almost nil, and their personal successes have deluded them into thinking they are capable of wading into waters well over their heads.

A case in point is Gary Francione, a respected lawyer, professor, and talented writer.

Francione preaches “abolition” of the use and consumption of animals (as do we all), but teaches that engaging in any activity which advocates for a particular species is “speciesist.”

Such campaigns are called “single-issue” campaigns, and their value extends far beyond their stated purposes.
Single-issue campaigns are the building blocks of social movements.
They cast the widest possible net to attract supporters.
They educate.
They develop personal, professional, and political relationships. They sway public and media opinion.
They recruit volunteers.
They develop leaders.
They train staff and provide experience for subsequent battles.

Mindless, juvenile, rejection of this most valuable and indispensable tool of the Animal Rights movement is tantamount to joining the other side.

However well intentioned Francione might be, he is as dangerous to the animals as the people coming at them with stun guns, knives, and scalpels.
He is undermining the Animal Rights movement under the guise of philosophical purity.
He is leading his followers down a road that leads nowhere.
It is a dead-end street lined with missed opportunity and self agrandizement.

Francione may be a brilliant lawyer, but his street smarts are still in the school playground.

BLOWBACK IN IRAQ: The Rise of ISIS

The Horse Carriage industry, as seen by the NY Times

Momma Bear Struggles with Cubs: Beyond...