The Editors say: It’s an old script: First force the public agency to fail and make everyone mad via underfunding and sloppy management. Then deprive it of popular support. Next move to privatize it with the assistance of the usual media jackals. McDonald was chosen for the job not for his experience in health care or civil service administration, but as a corporate boss and cost-cutter. 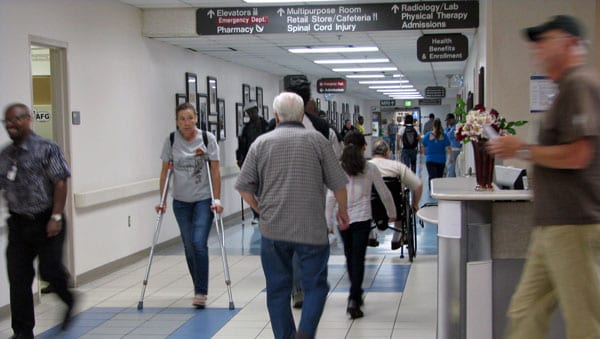 [B]arack Obama on Monday named former Procter & Gamble executive Robert McDonald to head the US Department of Veterans Affairs (VA). The nomination comes on the heels of a report delivered to the president Friday by Acting VA Secretary Sloan Gibson and a White House aide on problems related to the health care of veterans at the beleaguered agency.

McDonald’s nomination comes a month after the resignation of Eric Shinseki as VA secretary, following revelations of long wait times for treatment at VA facilities and falsifications of records to cover them up. Whistleblowers at one VA hospital, in Phoenix, Arizona, have charged that delays in treatment were responsible for at least 40 preventable deaths.

The scandal at the VA has been seized upon by significant numbers of Republicans and Democrats in Congress as the pretext to at least partially privatize veterans’ health care services. Obama’s choice of a corporate CEO to lead the VA breaks with tradition and indicates the intent of the president to shift towards privatization for the government agency, which with more than 340,000 employees serving some 9 million veterans is the largest health care entity in the US.

Announcing McDonald’s nomination Monday afternoon, President Obama hailed him as “one of our most accomplished business leaders,” with a “no-nonsense” management style. He said his nominee “is all about delivering results” and he was counting on McDonald to make the VA “more effective, more efficient.”

The catastrophe at the VA mirrors other crisis situations created by the policymakers themselves as part of a broad, international capitalist tactic to roll back workers’ rights and shrink the public sector. It afflicts Britain’s NHS as much as America’s beleaguered postal system, among other entities. —Eds

In other words, he has been chosen for the job not for his experience in health care or civil service administration, but as a corporate boss and cost-cutter. An earlier White House statement touted McDonald’s 33 years at P&G, where “he oversaw more than 120,000 employees, with operations around the world, selling products in more than 180 countries, in more than 2.5 million stores, reaching more than 5 billion customers.”

McDonald, 61, is a West Point graduate and former paratrooper, who served for five years in the US Army, leaving as a captain. He began his career at Proctor & Gamble in 1980, climbing the corporate ladder to become CEO of the multinational consumer goods company in 2009. He resigned from P&G in 2013. According to the Wall Street Journal, his resignation came “after investors grew concerned that he wasn’t doing more to cut costs and deliver more consistent results.”

While the media has called McDonald an “unexpected choice” to head the VA, he is no stranger to Washington. He was appointed by George W. Bush to an advisory committee on trade policy, and was reappointed to the panel by Obama in 2010. Nominating him on Monday, Obama said the ex-CEO was a frequent visitor to the White House, one of the many business leaders invited to advise the president on the Affordable Care Act and other administration policy issues.

McDonald has a record of supporting Republicans. According to the Center for Responsible Politics, he gave $2,500 to Mitt Romney’s presidential campaign in 2012, and contributed $1,000 to House Speaker John Boehner (Republican, Ohio), less than a year ago.

In a statement, Boehner praised McDonald as “a good man, a veteran and a strong leader with decades of experience in the private sector” who is “the kind of person who is capable of implementing the kind of dramatic systemic change that is badly needed and long overdue at the VA.”

He added that in order for McDonald to effect change, President Obama must commit “to doing whatever it takes to give our veterans the world class health care system they deserve by articulating a vision for sweeping reform.” Whether in the realm of social programs, health care, or veterans’ services, “reform” is a code word for slashing funding and gutting services.

The review of the VA health system delivered to Obama on Friday by Acting VA Secretary Gibson and Rob Nabors, White House deputy chief of staff, was long on generalities, pointing to the “corrosive culture” affecting performance and patient care at the Veterans Health Administration (VHA), which has “impeded appropriate management supervision and oversight.”

The report noted that the VA needed to prepare for changes in the size and demographics of veterans seeking care—“an increased number of female veterans, a surge in mental health needs, an increase in the special needs of younger veterans returning from Iraq and Afghanistan, and specific needs associated with older veterans.”

Although the review cited the need for additional resources—primary care physicians, specialty care physicians, administrators and support staff, physical space—it made no specific recommendations on recruitment of personnel. It did, however, note that the “VHA is working to increase the use of contract care,” i.e., veterans’ health care services at private facilities at VA expense.

Legislation proposed in the Senate by Bernie Sanders (Independent, Vermont) and John McCain (Republican, Arizona) includes a two-year trial project under which veterans who live 40 miles or more from a VHA facility would be able to seek alternate care in a private facility. A proposal being promoted by Rep. Andy Harris (Republican, Maryland) would establish what amounts to a voucher system, in which veterans could opt to go to a private provider of their choosing.

The Sanders-McCain bill would also provide $500 million for the expedited hiring of new VA doctors and nurses. This aspect of the legislation is likely to run into resistance by lawmakers in the US House, however, who view the VA as another government agency to be put on the chopping block.

The same Congress that is debating minimal additional funding of VA health services is almost certain to authorize the $500 million requested by Obama last Thursday for US military training and equipment for Sunni insurgents fighting the Syrian government.

This $500 million is part of a $65.8 billion request for Overseas Contingency Operations serving as a supplement to the massive $700 billion Pentagon budget, as the US military apparatus pursues new interventions around the globe, creating human misery in its wake and undoubtedly bringing a new wave of maimed and traumatized veterans back to the US.

John V. Walsh, Ralph Nader and the right-left alliance — no thanks

Rebels on the run after Ukraine forces recapture strategic city