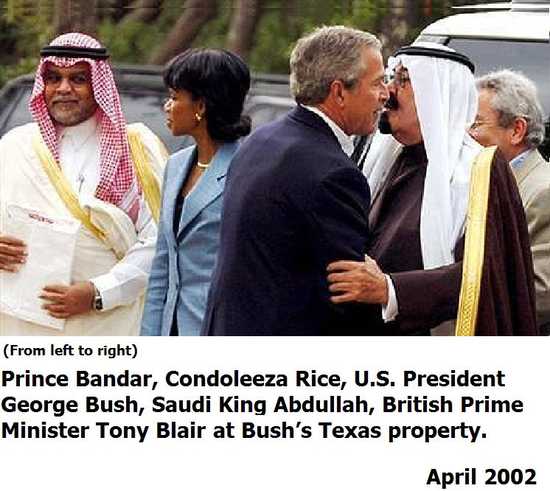 An August 2013 the Wall Street Journal reports that Saudi Arabia’s Foreign Policy includes overthrowing Syrian government, which is Shiite, to put in place their own Sunni government so they, Saudis, can ultimately control Damascus.

The Saudi plan is to steadily strengthen carefully selected groups of rebel fighters not in the radical Islamist camp, with the goal of someday seeing them in control in Damascus.

That’s a hefty goal the Saudis have — control Damascus.  And they want ‘who‘ to fight for ‘their’goal to control Damascus?  You guessed it, none other than the U.S. Military.The WSJ go on to write:

The Saudi Ambassador, Adel al-Jubeir, has long been courting members of Congress who could pressure the [Obama] Administration to get more involved in Syria. He found early support from Republican Sens. John McCain of Arizona and Lindsey Graham of South Carolina.

Prince Bandar has largely stayed out of Washington but held meetings with U.S. officials in the region. One was in September 2012. Sens. McCain and Graham, who were in Istanbul, met him in an opulent hotel suite on the banks of the Bosporus.

JOHN McCAIN: “Thank God for the Saudis and Prince Bandar,”

JOHN McCAIN: “Thank God for the Saudis and Prince Bandar, and for our Qatari friends,”

So, Saudi Arabia’s Prince Bandar enlisted Senator John McCain, Senator Lindsey Graham, and probably a host of other Senators, to goad America back into a middle east war so that Saudi Arabia can use the U.S. Military in securing Saudi Arabia’s ultimate goal, control of Damascus, Syria.

Prince Bandar was Saudi Arabia’s Ambassador to the United States from 1983 to 2005, was head of Saudi General Intelligence between 2012-March, 2014 and Saudi National Security Council Secretary General from 2005-Present.

Prince Bandar was involved in the 1980s CIA program of secretly financing the Contras in Nicaragua against a leftist government. The covert program led to criminal convictions for U.S. operatives and international rebukes.

2001: Saudi Prince Bandar’s Desire For Genocide Against ShiiteIn 2001, the Saudi Ambassador to the United States, Prince Bandar bin Sultan, told the British Intel Officer, Sir Richard Dearlove about his, Prince Bandar’s, desire for Sunnis to commit genocide on all Shiites.

PRINCE BANDAR SULTAN: “The time is not far off in the Middle East, Richard, when it will be literally ‘God help the Shia’. More than a billion Sunnis have simply had enough of them.”~ Prince Bandar to British Intel Officer, Sir Richard Dearlove

Sir Richard Dearlove says the years 2012-2014, when Prince Bandar was head of Saudi General Intelligence, were the crucial two years when al-Qaeda in Iraq (ISIL) took over the Sunni armed opposition in Iraq and Syria.2006: Saudi Prince Bandar Threatens Terrorist Attacks Against Britain

Previously secret files describe how investigators were told they faced “another 7/7” and the loss of “British lives on British streets” if they pressed on with their inquiries and the Saudis carried out their threat to cut off intelligence.[Prince Bandar] was accused in yesterday’s high court hearings of flying to London in December 2006 and uttering threats which made the prime minister, Tony Blair, force an end to the Serious Fraud Office investigation into bribery allegations involving Bandar and his family.
…
The judge said he was surprised the government had not tried to persuade the Saudis to withdraw their threats. He said: “If that happened in our jurisdiction [the UK], they would have been guilty of a criminal offence”.

The incident on 7/7/2005, which Prince Bandar referenced in his Terrorist threat, is when al-Qaeda killed 56 people and injured more that 700 in a series of bombs exploding in London.  At around 8:50am, there were 3 simultaneous explosions in London.  Then, at 9.47am, there was a fourth explosion on the upper deck of a no 30 bus in Tavistock Square.Saudi Arabia Funds al-Qaeda, including ISIL

Even though Saudis said they would stop funding Sunni Terrorist groups, wikileaks documents show they did not stop and that Saudis continued to fund al-Qaeda, including ISIL, Hamas and the Taliban throughout the Bush Administration’s “war on terror.”

(wikileaks) U.S. Secretary of State Clinton: The USG [United States Government] engages regularly with the Saudi Government on terrorist financing. The establishment in 2008 of a Treasury attache office presence in Riyadh contributes to robust interaction and information sharing on the issue. Despite this presence, however, more needs to be done since Saudi Arabia remains a critical financial support base for al-Qa’ida, the Taliban, LeT, and other terrorist groups, including Hamas, which probably raise millions of dollars annually from Saudi sources…”wikileaks documents

Saudi Arabia Suspected of Expanding ISIL in SyriaAs a reminder, in Syria there are three main groups fighting Assad’s army.

In June 2014, Steve Clemons wrote in the Atlantic reported that Saudi Prince Bandar (Sunni) created a covert operation to help ISIL to expand into Syria from Iraq.

[T]wo of the most successful factions fighting Assad’s forces are Islamist extremist groups: Jabhat al-Nusra [al-Qaeda in Syria] and the Islamic State of Iraq and Syria (ISIS), the latter of which is now amassing territory in Iraq and threatening to further destabilize the entire region. And that success is in part due to the support they [ISIL] have received from two Persian Gulf countries: Qatar and Saudi Arabia.

Qatar did not deny they fund both al-Qaeda groups, ISIL and Front, but they told Steve Clemons of the Atlantic that ISIL is a covert project of Saudi Arabia’s Prince Bandar.

Qatar’s military and economic largesse has made its way to Jabhat al-Nusra, to the point that a senior Qatari official told me he can identify al-Nusra commanders by the blocks they control in various Syrian cities. But ISIS is another matter. As one senior Qatari official stated, “ISIS has been a Saudi project.”.

ISIS, in fact, may have been a major part of Bandar’s covert-ops strategy in Syria. The Saudi government, for its part, has denied allegations, including claims made by Iraqi Prime Minister Nouri al-Maliki, that it has directly supported ISIS.

Senior White House officials have refused to discuss the question of any particular Saudi officials aiding ISIS and have not commented on Bandar’s departure. But they have emphasized that Saudi Arabia is now both supporting moderate Syrian rebels and helping coordinate regional policies to deal with an ascendant ISIS threat.

I should note here, after allegations came out that ISIL was a Saudi covert operation, the Saudi King accepted Prince Bandar’s resignation as head of Saudi General Intelligence.  However, Prince Bandar is still Secretary General of Saudi National Security Council.It is al-Qaeda groups like ISIL and Front that caused Joint Chiefs of Staff Chairman Martin Dempsey and Defense Secretary Chuck Hagel to encourage restraint in arming Syrian rebels.

Saudi’s Quest to Topple Assad and Gain Control of Damascus.

In 2013, The Wall Street Journal reported that American Officials and Arab Officials said the King of Saudi Arabia would

… do whatever was needed to bring down Mr. Assad

Steve Clemons of the Atlantic wrote his opinion regarding John McCain and Lindsey Graham sucking up to Saudi Prince Bandar and their willingness to let Saudi Arabia use the US Military to gain control of Damascus.

John McCain’s desire to help rebel forces toss off a brutal dictator and fight for a more just and inclusive Syria is admirable. But as has been proven repeatedly in the Middle East, ousting strongmen doesn’t necessarily produce more favorable successor governments. Embracing figures like Bandar, who may have tried to achieve his objectives in Syria by building a monster [ISIL], isn’t worth it.

Other than Saudi Arabia funding ISIL, the Taliban, al-Qaeda and Hamas, I don’t know how deep the ISIL-Saudi connection goes.  I do know, however, that both ISIL and Saudi Arabia are simultaneously trying to goad America into jumping headfirst into another war in the middle east.  They do not want America to carefully design an operation that would have greater success.  They want us to just jump in headfirst.  They’ve enlisted John McCain and Lindsey Graham to sell us that war.Yes, I think America and Britain etc., should eradicate ISIL but we should do it at a time and manner we choose and not just jump in when Saudi Arabia and ISIL tell us to.

Congress needs to have an open, honest dialogue on the floors of Congress.

Congress needs to let America know that the Saudi Arabia’s Prince Bandar connection to funding al-Qaeda, including ISIL and Qatar’s claim that ISIL was a covert operation of Prince Bandar.

… then, after all that, then take a vote on Senator Graham’s plan to send in US combat troops to Syria.

The Editor answers: Political systems like global capitalism based on class dynamics cannot “learn”. Like robots they will go on enacting their program —the class consensus of its worst and most amoral members—till disabled or destroyed by external forces.

“Peace” demonstrations in Russia and other manufactured matters