Mass grave found near disappearance of student protesters in Mexico 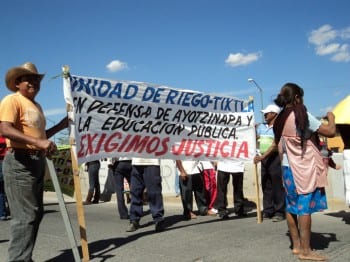 “We demand Justice” proclaims the banner held by local villagers. (click to enlarge)


[A] mass grave found in the southern Mexican state of Guerrero Saturday reportedly contains at least 28 charred bodies. The grave is near the location where 43 teaching students disappeared on the night of September 26 following clashes with local police in the city of Iguala, about 200 kilometers south of Mexico City.

Students from a rural teacher training college in the town of Ayotzinapa near the Guerrero state capital Chilpancingo reportedly went to Iguala to raise funds for their studies as part of a protest of government policies cutting teacher rights and school funding.

After the students took some buses to return to Chilpancingo, local police opened fire, killing three students and wounding 25. Videos show that the police then arrested 58 students and placed them in police vans. Fifteen students later appeared, but 43 remained missing.

Guerrero state prosecutors arrested 22 local police for the shootings, and later eight members of the Guerreros Unidos gang, which has had close relations with police.

After interrogation of the arrestees, it emerged that the police had turned the students over to gang members, who then took them to houses in the poor Pueblo Nuevo section of Iguala. One of those arrested said that the students were led on foot to a hilly area about an hour outside of town, murdered and dumped into six mass graves.

Local and state police in Guerrero are part of an apparatus that routinely violently oppresses those who protest government policies.

Guerrero teachers, including the Ayotzinapa teaching students, have a history of radical and militant protest. In December 2011 state police officers shot and killed two Ayotzinapa students who had blocked the highway to the Pacific resort town of Acapulco with buses. The students were demanding more school funding and assured jobs after graduation.

In the wake of the Iguala massacre, Mexico’s National Human Rights Commission said it had opened its own investigation into possible “serious human rights abuses” such as extrajudicial executions and forced disappearances. The commission warned about what it called the particularly “delicate” situation in Guerrero.

Several hundred students protested on Saturday night in front of Guerrero Governor Ángel Aguirre’s residence in Chilpancingo, expressing anger that some of their classmates may be among the bodies found in the graves.

A group of up to 2,000 protesters blocked a main highway in Chilpancingo on Sunday demanding justice and requesting donations from passing motorists for the students’ families and the school.

The Iguala executions come after the arrest of an army officer and seven soldiers for killing 22 people on June 30 in nearby Mexico State. Officials originally claimed that the encounter in San Pedro Limón/Tlatlaya involved soldiers firing in self-defense in a shootout with local gang members. An investigation by the Associated Press later revealed that the killings appear to have been executions.

Last week a woman who said she witnessed these events told the Associated Press that only one person died in the initial confrontation, and that the rest were shot after surrendering. Those murdered included her 15-year-old daughter, who had been wounded in the leg and was lying on the ground when a soldier killed her.

The soldiers were part of the 102nd Battalion of the Infantry of the Mexican Army, which was established with the particular favor of the current Mexican President, Enrique Peña Nieto, when he was governor of Mexico State. In 2011 the Supreme Head of the Mexican Armed Forces incorporated the battalion into “Operation Mexican Security,” ostensibly to fight narcotics trafficking.

The likely explanation for the massacre is that battalion members were supporting a rival gang chief. According to the Mexican magazine Proceso, at least twelve members of the battalion are being investigated for other extrajudicial executions of civilians in connection with organized crime.

Peña Nieto came into office in December 2012 pledging to reduce the violence of the war involving drug traffickers and the government, which has killed as many as 100,000 people since 2007. More than 20,000 Mexican civilians are officially listed as having disappeared in Mexico in the last eight years.

Peña Nieto’s government ostensibly reduced military conflict with drug traffickers, focusing instead on public relations victories arising from the occasional seizing of cartel bosses, such as the Sinaloa cartel head “Chapo” Guzmán early this year. This downplaying of the drug wars was part of an effort to soothe investors as Peña Nieto pursued his program of opening up the Mexican economy to foreign investment, including in the oil industry.

Peña Nieto’s Institutional Revolutionary Party (PRI) had a long history of violent extrajudicial killings when it ruled Mexico from to 1929 to 1999, as well as involvement with drug cartels.

The Tlatelolco massacre involved the killing of an estimated 400 students and civilians by army and secret security units on October 2, 1968 in the Plaza of the Three Cultures in Mexico City. Dozens of students were killed and wounded by a special paramilitary unit during a protest in Mexico City over education funding on June 10, 1971, an event known as the Corpus Christi massacre. No officials were ever successfully prosecuted for these killings, including former PRI President Luis Echeverría, who was Interior Minister during those years.

From the 1960s to the 1980s the government conducted a dirty war and mass disappearances against all those who challenged it policies. This took particularly violent form in Guerrero, a poor rural state that has a history of armed, peasant rural uprisings.

Investigative reporting has presented convincing evidence of the involvement of PRI officials with drug cartels from 1988 to 1994 during the presidency of Carlos Salinas de Gortari, Peña Nieto’s PRI trailblazer in privatizing Mexico’s economy. Salinas’s brother Raúl was caught with hundreds of millions of dollars in foreign bank accounts in 1995, despite having earned an annual salary of $190,000 during his brother’s presidency.

It is widely believed in Mexico that PRI’s links to cartels have continued with its return to power under Peña Nieto. Only two weeks ago a PRI congressman, Gabriel Gómez Michel, was kidnapped and killed in Guadalajara in Jalisco State, a killing likely linked to drug trafficking.

Guerrero, and other southern states such as Oaxaca and Michoacán, are social cauldrons, with criminal gangs battling over turf, vigilante “self-defense” movements and crushing poverty and joblessness.

The tensions in these southern states are a distillation of what is a wider, raging class war in Mexico, as the Peña Nieto government imposes deeply unpopular measures demanded by the ruling class and foreign capital. The threat is very real that the Mexican government will use the excuse of the drug war to kill and oppress all those who oppose these policies.

SYRIZA rising: what’s next for the movements in Greece?

DHS: Russia Will Interfere With U.S. Elections By...

King of hypocrisy: Obama says no one is...