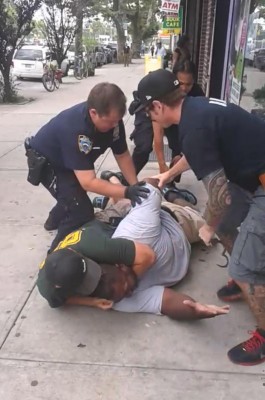 Cops ganging up on Garner, and clearly using too much force, despite his cries of difficulty breathing.

Protests continued over the weekend in dozens of US cities against the official whitewashes of the police killings of Eric Garner in New York City and Michael Brown in Ferguson, Missouri.

There were demonstrations for a fifth consecutive day Sunday in New York, where a grand jury in Staten Island refused to indict policeman Daniel Pantaleo despite widely circulated cellphone videos showing a half-dozen other cops overpowering Garner while Pantaleo applyied a chokehold to his neck, causing his death.

Violent clashes with police erupted at the Berkeley protest after police, using clubs and firing tear gas canisters and rubber bullets, charged a peaceful demonstration. The largest protests continue to be in New York City, where police have pulled back from mass arrests after 200 demonstrators were rounded up Thursday in Times Square.

The official reaction to popular anger over the whitewash of Eric Garner’s murder differs superficially from the militarized response to the November 24 decision of a grand jury in Missouri to bring no charges against the cop who fatally shot Michael Brown.

State authorities sent more than 2,000 National Guard troops into Ferguson and St. Louis, Missouri with the clear threat to use massive force against protests. At the same time, government officials from President Obama on down declared that the grand jury process had to be respected, while the media proclaimed the evidence demonstrated the innocence of Officer Darren Wilson.

In the Garner case, where the cellphone video provided incontrovertible proof of the police killing of an unarmed man, the government and media response has been more cautious, expressing sympathy for the Garner family and calling for empty “reforms.”

Above all, the Obama administration has sought to divert popular anger over the police killings into the blind alley of racial politics, depicting the root problem to be racial prejudice, particularly among individual policemen, to be overcome by better training and the recruitment of more African-American cops.

The essential source of police violence against the working class is rooted, not in a centuries-old slave system, but in today’s capitalist oppression of the vast majority of the population by a corporate-financial elite.

He urged patience, particularly on young people who have been in the forefront of the recent protests, saying, “When you’re dealing with something as deeply rooted as racism or bias in any society, you’ve got to have vigilance, but you have to recognize that it is going to take some time and you just have to be steady.”

While police violence and harassment are pervasive in impoverished and predominantly African-American neighborhoods in many US cities, the majority of those killed by police are white, a fact that was underscored by the latest police murder, the killing of an apparently mentally ill man on Hollywood Boulevard in Los Angeles Friday night. The man was holding a pocket knife and represented a threat to no one but himself, but he was gunned down as horrified tourists looked on, 100 yards from the site of the annual Academy Awards.

Appearing on the NBC interview program “Meet the Press” Sunday, Esaw Sniper-Garner, the widow of Eric Garner, said that her husband’s killing was not just a matter of police racism.

She explained that her husband was well known to the police because he sold untaxed loose cigarettes to make ends meet, and lived only two blocks from the headquarters of the 120th police precinct. He had been arrested many times, and never offered any physical resistance.

Snipes-Garner said she was herself afraid of the police, in the aftermath of her husband’s death. “Yes I am,” she insisted. “That’s why I left Staten Island.”

Appearing side-by-side on the same program, Al Sharpton, acting in his capacity as a political agent of the Obama administration, sought to turn the discussion with Esaw Garner back to race.

He urged more appeals to the Obama administration and Congress for action by the Department of Justice in both the Garner and Brown cases. Referring to Garner, Sharpton said, “If he was of a different race, with the same background … would he have been treated the same way?” In fact, it would be more appropriate to ask whether Garner would have been treated the same way if he had Sharpton’s wealth.

At the same time, Sharpton suggested that black workers were responsible for the endemic conditions of poverty and police repression. Proclaiming his support for the Obama administration, Sharpton said his organization, the National Action Network, “supported the jobs bill, support infrastructure development, because we want to challenge men in our community to say, ‘You’ve got to stand up and you’ve got to be responsible.’”

While the Sunday network interview programs devoted the lion’s share of their time to the popular response to the police killings, there was virtually no discussion of the actual role of the Obama administration in encouraging such violence, through the federal program that promotes the militarization of local police and supplies them with heavy weapons, including automatic rifles, armored vehicles and other military equipment made available from the wars in Iraq and Afghanistan.

The most significant action taken by the Obama administration in the wake of the Garner grand jury decision was to declare its full backing for these programs, as outlined in a White House report released early last week. The action underscores the fundamental class issues at stake. Representing the corporate and financial aristocracy, the administration is absolutely committed to the continued build-up of the apparatus of repression in the United States.