Getting Rid of Al Sharpton and the Misleadership Class 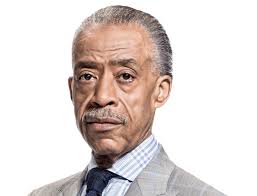 [dropcap]Black America[/dropcap] enters 2015 on a radically different political trajectory than could have been imagined prior to August 9. When the youth of Ferguson stood up to the militarized police to demand justice for Michael Brown, they challenged not only the legitimacy of the coercive organs of the State, but also the fitness for leadership of the accommodationist Black political class.

Although many of the young activists may not have been aware that they were crossing a kind of Rubicon, the threat that “Ferguson” represented to the post-Sixties order was immediately evident to the Black misleaders that have colluded with the mass incarceration regime for the past two generations. Instinctively drawn to the service of Power, and determined to protect the legacy of the Black icon in the White House, the collaborating Black classes moved quickly to limit Ferguson-related demands to those that were politically palatable to the president, such as body-cameras for cops, and to divert the nascent movement away from confrontation with the State and its police.

It soon became obvious that the Al Sharptons of the community were attempting to isolate the core Ferguson activists and prevent the coalescing of a youth-led national Black movement – especially one that might act in concert with non-Blacks in the remnants of the anti-war and Occupy movements.

The size, political content and momentum of the movement-in-the-making has caused the ground to shift beneath the Black misleaders’ feet. “Black Lives Matter” means all Black lives, not just the privileged minority that was catapulted into leadership by the demise of legal apartheid half a century ago and has pursued its own selfish class interests, ever since. “I Can’t Breathe” is a cry from those whose hopes and dreams have been put on permanent lockdown by a police and penal system that is specially designed to strangle Black liberationist aspirations, yet operates at full throttle in the nominally Black-controlled cities of the nation under the maintenance and protection of Black Democrats.

“The Al Sharptons of the community are attempting to isolate the core Ferguson activists and prevent the coalescing of a youth-led national Black movement.”

Black activist youth – a self-aware cohort that grows larger every day – did not pick a fight with Black elected officials and the “traditional” civil rights organizations. Generally speaking, Black young people want to fight the white powers-that-be, and have little appetite for confrontation with the Black community’s secular and clergy notables. However, Ferguson’s defiance of both the police and local and national Black political pacifiers set the stage for an intra-Black struggle that will likely determine the future of progressive politics in the United States. Sharpton’s crude lunge to capture and corral the anti-police protest has put youth activists on notice that a battle for national Black leadership has begun. From this point forward, Sharpton and his colleagues in the old line civil rights groups and Democratic Party Black caucuses will deploy every scheme imaginable to hijack, subvert and otherwise thwart the growth of a radical, youth-dominated, Black grassroots movement strategically aligned with non-white radicals.

The growing rift should be welcomed. Until the Ferguson “breakout,” there seemed to be nothing in Black America’s immediate future except more misery, followed by the onset of mass Black postpartum-like psychological depression once the Obamas exit the White House, in January, 2017. I have for years been predicting that the sudden withdrawal of the First Black President would likely result in a Great Hangover with as debilitating an effect on the Black polity as the Great Delirium of insane exhilaration that ushered in the Age of Obama. The events that began in Ferguson may have altered that prognosis.

With a new movement afoot, we have the chance to avert the stultifying malaise of the Big Hangover scenario and the further entrenchment of the same vile Black leadership that has rendered Black America more impotent with each passing decade. Instead, thanks to the liberating model of Ferguson, there is the opportunity to thoroughly discredit the Black Misleadership Class and to move towards a new and transformational political dynamic in Black America and the larger society.

“Sharpton’s crude lunge to capture and corral the anti-police protest has put youth activists on notice that a battle for national Black leadership has begun.”

It will be a nasty fight – a kind of civil war to purge the Black polity of the deep corruption inherent in the behavior of the self-aggrandizing classes that have “spoken” for the masses since the demobilization and nightmarish repression of the late Sixties. If the Black American historical consensus on social justice, peace and self-determination is to be reinvigorated in the near term, the internal struggle must begin in earnest, before the next presidential race heats up.

In the absence of a Black mass movement, the Democratic wing of finance capital and their Black operatives will once again divert African Americans from mounting their own challenges to the evils that oppress them, and we will witness another sickening circling of the wagons around the supposedly Lesser Evil blue donkey – the trap that has neutralized Blacks as an independent social force in the U.S. The next year of struggle in the streets will determine if Black America can break the cycle of entrapment through a movement that seeks to uproot existing relations of power, rather than becoming more tightly bound to the oppressor’s institutions.

The struggle begins at the point of the most intense Black confrontation with the state – the police, as has been the case since the first Black urban rebellion of the modern age, in Harlem, in 1935. Ferguson is part of that continuum. The logic of the struggle is to dismantle the Black Mass Incarceration State, the institutional executioner of Michael Brown, Eric Garner and thousands more.

Torture and the Violence of Organized Forgetting