Published: January 23, 2015Last Updated on July 23, 2015 2 minutes read
[dropcap]Organized[/dropcap] brutality and murder by the rightwing —which represents the interests of entrenched wealth—is an ongoing proposition. It never stops. In the postwar the CIA, in secrecy or behind an elaborate propaganda curtain, implemented widely the concept of death squads around the world, especially in Asia and Latin America, albeit in its more sneaky American style. 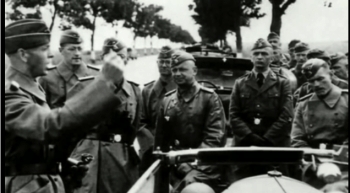 Nazi commandos taking souvenir pictures of their mission on the way into the USSR territories. (Screen grab-TGP)

[dropcap]In June 1941, [/dropcap]Nazi mobile killing squads, known as Einsatzgruppen, were dispatched throughout Eastern Europe. By the spring of 1943, the 3000 members of the Einsatzgruppen, led by highly-educated officers and aided by local collaborators in each country, had systematically murdered over a million Jews and tens of thousands Roma, handicapped, partisans, Communists and Soviets. Who were these men who organized and carried out mass murder at close range?


Prazan’s definitive masterwork is one of the essential films documenting the Holocaust and features a powerful array of astounding, never-seen-before film and photographs (some in color) discovered by the filmmakers in Eastern European archives. Prazan interviews a slate of internationally renowned historians, including Christopher Browning, Christian Ingrao, Martin Dean and Ralf Ogorreck, along with Holocaust survivors, witnesses and perpetrators (several filmed using hidden cameras).

Obama’s betrayal of the environment.