Is This Beneficial?  Is China Imperialist? 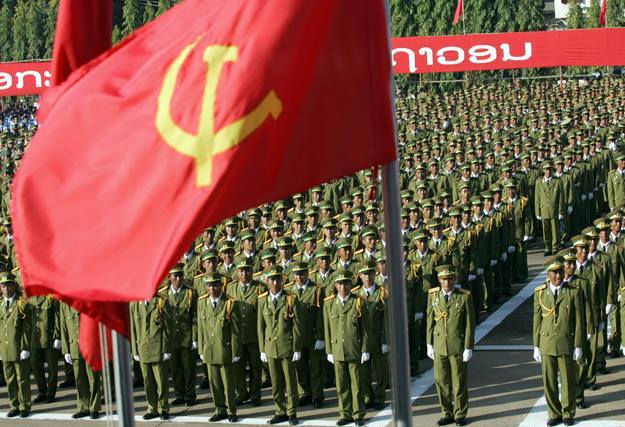 Laos army in formation, during ceremonies.

This will help keep Laos free of some of the debt slavery suffered under the loans countries are given by the World Bank and the International Development Bank. Under those imperialist capitalist loans, poor countries subsidize the wealthy ones with exorbitant interest rates on unpayable loans, causing the flow of wealth to be from poor countries to the rich. Robin Hood in reverse. In addition, restructuring is contingent on harmful policies of austerity and privatization. A form of colonialism.

Laos is a deformed workers state, with gains built on the defeat of U.S. imperialism in South East Asia in the so-called “Vietnam War” and the subsequent overthrow of capitalism in Laos. Yet, Laotian socialism is also built on the foundations of poverty and underdevelopment caused by imperialism, neo-colonialism, and a devastating war that dropped more bombs per capita on the people of Laos than have ever been dropped on any other country in the world while Agent Orange destroyed valuable forests and cropland. In addition, Laotian socialism was built on a deformed model, lacking real workers democracy and lacking an internationalist program to break out of isolation and free the world from imperialism and capitalism through world socialist revolution. Leninist-Trotskyists defend the Laotian Revolution from imperialist attacks and internal capitalist counterrevolution while recognizing its faults, advocating workers democracy, and recognizing the need for the world revolution to break Laos out of its shaky economic foundations.

For many on the left, China’s investments bringing development to numerous underdeveloped countries are seen as a form of imperialism. This ignores a few basic facts. First of all, the vast majority of these investments are by the Chinese mainland state run banks or other state owned sectors. Instead of being short-term speculative investments based on the profit motive, as imperialist capitalist investments are, they are investments that seek needed commodities for China’s economy which is still largely planned and socialist. Unlike the USSR’s planned socialist economy, which was built in a resource rich country, China is now building up its economy, largely through the vast advantages of socialist planning, in a country that is relatively resource poor. To do so they must invest in other countries in order to import needed resources for their collectivized enterprises back in China.

To extract these resources China makes investments. For many in Africa and Asia these investments in schools, roads, railroads, and other needed infrastructure and enterprises are generally seen as a welcome change from the neglect and underdevelopment imposed by the imperial capitalists. This is not to say that there have not been abuses, but these well known abuses have come from the small minority of private Chinese enterprises functioning abroad.

The socialist character of Chinese investments was even recognized by U.S. State Department official Princeton Lyman in a 2005 presentation to the Congressional U.S.-China Commission, who said:

“China utilizes a variety of instruments to advance its interest in ways that western nations can only envy. Most of China’s investments are through state-owned companies, whose individual investments do not have to be profitable if they serve overall Chinese objectives. Thus the representative of China’s state-owned construction company in Ethiopia could reveal that he was instructed by Beijing to bid low on various tenders, without regard for profit. China’s long term objective in Ethiopia is in access to future natural resource investments, not in construction business profits.”

This has produced radically different ways of operating that have been highly praised by important African academics. Chinese investments in Laos, which includes aid and interest free loans, are no less likely to prove mutually beneficial.

-Steven Argue of the Revolutionary Tendency

The Tragedy of “American Sniper:” It takes a Shot at History and Turns It Into Deadly Jingoism

When ISIS Ran the American South