Print this post.
AJAMU BARAKA
Obama has contributed greatly to the passivity of the Western left. They still can’t believe a Black president could be as bad or worse than even the criminal Bush-Cheney gang. 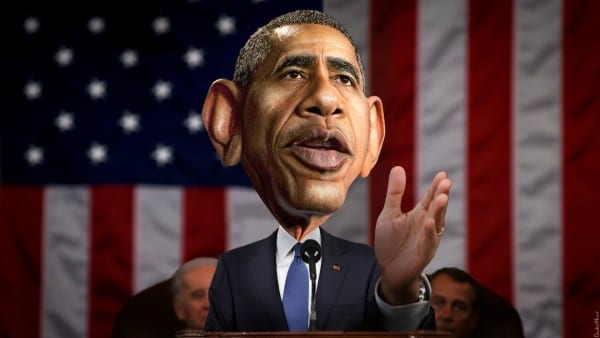 The announcement by the Obama administration that it will seek congressional authorization to expand the war on ISIS in Syria and possibly send more heavy weapons to its client government in Ukraine did not generate the kind of muscular opposition and sense of urgency that one would expect from the anti-interventionist liberals and significant sectors of what use to be the anti-imperialist and anti-war left.

Outside of a few articles written by some of us confined to the marginalized and shrinking left, the reports that the administration was considering both of these courses of action were met with passing indifference. It is as if the capitalist oligarchy’s strategy of permanent war has been accepted as a fait-accompli by the general public and even significant numbers of the left.

The fact that the U.S. President could launch military attacks in Syria, supposedly a sovereign state and member of the United Nations, for six months without any legal justification and not face fierce criticism in the U.S. and internationally demonstrates the embrace of lawlessness that characterizes the current epoch of Western imperialist domination.

And the acquiescence of much of the left in the U.S. and Europe on the issue of Syria and the U.S. supported coup in Ukraine reveals the moderating and accommodating forces within the faux left that attempts to bully and intimidate anti-imperialist critics.

To oppose the dismemberment of Syria or criticize the dangerous collaboration between the U.S. and racist neo-Nazi elements in Ukraine was reduced to the silly and intellectually lazy arguments that one was “pro-Assad” or a dupe for Putin!

However, the current ideological environment did not evolve by accident or by the particular confluence of historical events. The disappearance of anti-imperialism among the cosmopolitan left in the U.S. and Western Europe is reflective of a monumental ideological accomplishment by the propagandists of empire. The professional propagandists of empire and Western dominance were able to adroitly “introject” into the center of the radical world-view and consciousness a liberal ideological framework that privileged “anti-authoritarianism” over anti-imperialism.

The political consequence of this shift in consciousness has been disastrous for oppositional left politics throughout the West but particularly in the U.S. As the U.S. increasingly turned to lawless violence to advance its interests over the last seven years of the presidency of Barack Obama, “leftists” in the U.S. objectively aligned themselves with the U.S./EU/NATO axis of domination through their silence or outright support in the name of opposing authoritarian regimes.

The human consequence of this collaboration with U.S. and Western militarization by progressive forces in the U.S. and Europe has translated into unrestrained violent interventions from Libya to Syria and back to Iraq. Along with the escalations of direct military interventions, economic warfare and subversion directed at the state and people of Iran, Russia, Venezuela, and other progressive states in Latin America has resulted in the unnecessary suffering of millions.

And while the left and millions of Europeans will mobilize to condemn the 17 lives lost in the incident in Paris and defend “Western values,” there is no massive moral outrage from the Western public for the millions that have died at the hands of Western imperialism and the death and destruction that is promised with policies being considered for Syria and the Ukraine by the ruling elite in the U.S.

Fortunately, despite the political confusion of many leftists and the moral duplicity of liberals, signs of growing opposition to U.S. war-mongering are emanating from a historically familiar place – African American young people.

Similar to what occurred in the 1960s when opposition to the Vietnam war was catalyzed by the student organizers of the Student Non-Violent Coordinating Committee (SNCC) working on the frontlines of struggle in the deep South, “Black Lives Matter” activists and the many other formations and tendencies crystalizing out of the Ferguson and anti-police violence movements are making the connection between violence and militarization in the internal colonized areas of the U.S. and the state violence being waged by the U.S. state beyond its borders.

Resistance to the logic of white supremacist colonialist/capitalist domination on the part of these young activists is leading them to a resolute anti-imperialist and anti-war stance, just like the young black activists of SNCC some fifty years ago.

Alicia Garza one of the founders of the Black Lives Matter movement offers a welcomed lesson to the faux left:

“There is absolutely a link between the militarization and the use of force to police black communities in the US and the role of the military to police people of color and Black people in the global South. In both scenarios, the police and the military are used to protect private property and the interests of the elite, but are also used to dampen and or eliminate any resistance to the status quo.”

The experiences of these activists in the U.S. and their increasing connections with struggling peoples’ throughout the world is making it clear to them that the slogan “to protect and serve – capital, ” not only applies to the occupation forces that police the racialized colonies inside the U.S. but also the role of the U.S. military abroad.

“Black against empire,” is not only a title to a book; it also captures the radical stance that conscious black radicals in the U.S. must assume.

The systemic degradation that characterizes the social experiences of African American workers, the marginalized poor, and working class of all of the oppressed and colonized nations and peoples’ by the U.S. empire, strips away the pretense of a benevolent hegemon. The lived experience of oppression means that African American radicals – unlike many white radicals – cannot afford the luxury of being unclear about the nature and interests of the white supremacist, patriarchal, colonial/capitalist order. It is and will be the primary enemy.

On Sept. 12, 2001, the day after the attack in New York city and before it was clear what forces were behind the attack, neoconservative pundits revealing the pre-determined strategy that was to guide U.S. policy in the 21st century, were forcefully arguing that the U.S. must be prepared to use force in the world and in the immediate period to declare war on “militant Islam.” The countries identified for immediate attack included Syria, Libya, Iraq, and Iran, with China thrown in as well.

Permanent war and lawless gangsterism to protect and advance U.S. global economic and political interests was codified in the National Security Strategy (NSS) document issued by President Bush on Sept. 21, 2002.

And while the pursuit of that strategy made President Bush the symbol of U.S. arrogance and generated vociferous liberal and progressive opposition, Barack Obama has faithfully carried out that very same neocon strategy becoming the smiling brown face of U.S. polices as morally repugnant as his predecessor – but without progressive, popular opposition.

The lack of moral outrage and political opposition to the reactionary policies of Barack Obama is changing and will change even more rapidly as the new generation of black activists shift the center of oppositional politics back to the radical black tradition.

When/if that happens, there will be a much needed rebirth of the anti-war and anti-imperialist movement and radical activism in the U.S. will take a qualitative leap forward.

[box] Ajamu Baraka is a human rights activist, organizer and geo-political analyst. Baraka is an Associate Fellow at the Institute for Policy Studies (IPS) in Washington, D.C. and editor and contributing columnist for the Black Agenda Report. He is a contributor to “Killing Trayvons: An Anthology of American Violence” (Counterpunch Books, 2014). He can be reached at info.abaraka@gmail.com and www.AjamuBaraka.com [/box]

The Long History of Opposition to Science