“Armed Islamist movements existed in neither Iraq nor Syria—nor, for that matter, in Libya—before US imperialism intervened to topple secular Arab governments in all three countries.” 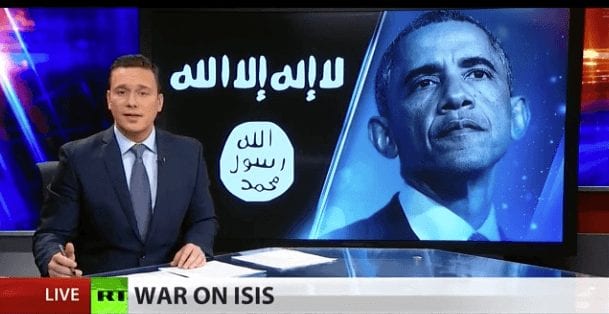 The Post named the ISIS member as Mohammed Emwazi, a 26-year-old who was born in Kuwait and raised in London. He is described in a CNN report as “a Briton from a well-to-do family who grew up in West London and graduated from college with a degree in computer programming.”

The media reporting on this identification has been dominated by discussions of the psychology of terrorism and the role of Islamist ideology, along with speculation as to why someone from such a background would choose to engage in such barbaric acts.

All of these banalities are part of a campaign of deliberate obfuscation. Purposefully left in the shadows is the central revelation to accompany the identification of “Jihad John”—the fact that he was well known to British intelligence, which undoubtedly identified him as soon as his image and voice were first broadcast in ISIS videos.

Not only did Britain’s security service MI5 carefully track his movements, it carried out an active campaign to recruit him as an informant and covert agent. As the British daily Guardian put it Thursday, MI5 has “serious questions” to answer about its relations with Emwazi.

Chief among these questions is whether the intelligence agency was successful in its recruitment efforts. In other words, did Emwazi go to Syria with MI5’s foreknowledge and blessings?

If there is doubt as to whether Emwazi was recruited, it is clear that other ISIS jihadists have been. The BBC reported that British intelligence has refused to name Emwazi for “operational reasons.” It adds: “The practice by intelligence agencies of approaching jihadist sympathisers to work for them is likely to continue. It’s believed both Britain and the US have informers inside the Islamic State ‘capital’ of Raqqa. Yet this seems to have been little help in stopping the actions of Mohammed Emwazi, or bringing him to justice.”

At its heart, the case of “Jihadi John” is of significance because of what it says about the real relationship between Western imperialism and ISIS. In the final analysis, ISIS is a product of the interventions by Washington and its allies in the region.

Armed Islamist movements existed in neither Iraq nor Syria—nor, for that matter, in Libya—before US imperialism intervened to topple secular Arab governments in all three countries.

It is not only a matter of these movements emerging out of the mayhem, death and destruction unleashed by the US military and CIA in these countries at the cost of well over a million lives and wholesale social devastation.

Like Al Qaeda before it, ISIS is a creation of US and Western imperialism, unleashed upon the peoples of the region in pursuit of definite strategic aims. In Libya, Islamists now affiliated with ISIS provided the principal ground forces for the US-NATO war to topple Muammar Gaddafi. In Syria, ISIS, the Al Qaeda-affiliated Al Nusra Front and similar Islamist militias have played a similar role in a war for regime-change that has been backed by Washington and its allies.

By all accounts, so-called “foreign fighters” comprise the largest component of the “rebels” who have sought to topple Syrian President Bashar al-Assad over the past three-and-a-half years. Estimates have put their number at over 20,000, with recruits drawn from throughout Europe, North America, Central Asia and elsewhere.

While the media presents the flow of these fighters into Syria as something of a mystery, the question of how they have gotten there can be easily answered. The CIA, MI5 and other Western intelligence agencies have not merely turned a blind eye to Islamists traveling from their respective countries to the Syrian battlefield, it has offered them active encouragement. Turkey, a key US ally, has facilitated the flow of these elements across its border into Syria.

It should be recalled that Western governments and media painted forces like ISIS in Syria as democratic “revolutionaries” waging a progressive struggle against a tyrant. The war, which was stoked through orchestrated provocations, was cited as a justification for “humanitarian” intervention.

Arms and funding poured in to back the largely Islamist “rebels,” even as Washington and its allies steadily escalated the threat of direct intervention. The Obama administration went to the brink of launching a savage bombardment of Syria in September 2013, only to beat a tactical retreat in the face of unexpected opposition.

The Islamist forces on the ground in Syria felt themselves the victims of a double-cross. Much like the CIA’s Cuban counterrevolutionaries at the Bay of Pigs a half-century earlier, their promised US air support did not come and they lashed out in retribution. Ultimately, this took the form not only of the serial beheadings of Western hostages, but also the debacle inflicted upon the US-trained security forces in Iraq.

Washington has hypocritically seized upon the beheadings in an attempt to whip up support for its new intervention in the Middle East. But when similar atrocities were carried out by ISIS and its cohorts against Syrian Alawites, Christians and captured conscripts, the Obama administration looked the other way.

In the wake of the revelations about “Jihadi John,” Britain’s Tory Prime Minister David Cameron issued a ringing defense of the country’s security services, describing its members as “incredibly impressive, hard-working, dedicated, courageous.” He declared his sympathy for their “having to make incredibly difficult judgments.” He insisted that “the most important thing is to get behind them.”

If Britain were a functioning democracy, the revelations about the role of MI5 and its relations with Mohammed Emwazi and ISIS generally would be the subject of a parliamentary inquiry that could spell the fall of the government.

However, in London, as in Washington, the government has been largely taken over by the military and intelligence apparatus, whose crimes are systematically covered up with the aid of a complicit corporate-controlled media.

For workers in Britain, the US and internationally, these revelations only underscore the necessity to build up a genuine antiwar movement based on a socialist and internationalist program and in intransigent opposition to all attempts to exploit the crimes of ISIS—the Frankenstein’s monster created by imperialism—to justify the escalation of war abroad and repression at home.