Ignorant US taxpayers’ dollars at work.  While the media and the top politicos in both parties lie, this is what our government supports. 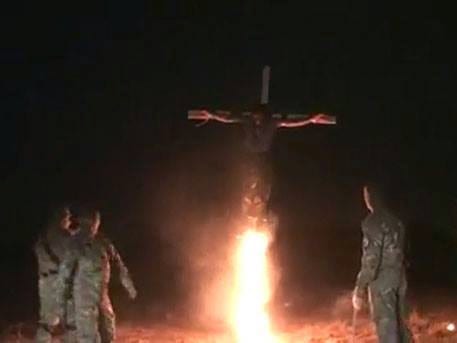 April 24, 2015
TVZvezda.ru
Translated from Russian by Kristina Rus
[dropcap]U[/dropcap]krainian fighters from the ultranationalist voluntary regiment “Azov” sent a video of an execution of a Novorossia soldier to militia fighters and hackers from “Cyberberkut”.
.

“According to the authors of this video, the footage was filmed near the village of Shirokino, and “all the separatists, traitors of Ukraine and militia fighters will be treated the same“, –  “Cyberberkut” quoted the message from “Azov”.

The footage shows how several “punishers” (As Kiev’s forces are usually called) tied their victim to the cross, stuck the cross into the ground, and set fire to the wooden structure.

“This will not add fear neither to us nor [to] the Armed Forces of Novorossia: we have already experienced too much in this life! But after this hardly anyone will capture ‘Azov’ members alive” – responded the hackers to the atrocities of the security forces.

The authenticity of the video is not yet reliably confirmed. No official statements were made by the authorities of DPR. 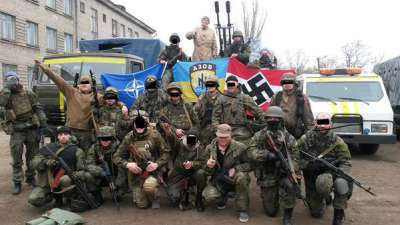 Members of the Azov battalion. Such elements are now being trained by NATO instructors, including American special forces.

“Azov” —which has never hidden its fierce neoNazi ideology—is one of the most infamous units of the Ukrainian National Guard. The unit was formed as a battalion, and in the fall expanded to a regiment. The unit consists of staunch nationalists and fascists – Ukrainian and mercenaries from other countries. The regiment uses the symbols of SS of Nazi Germany on its flag. Atrocities, harassment and war crimes of “Azov” fighters against the civilian population were repeatedly reported. Based in Mariupol.

The Americanization of Emily – “War Is Not Moral”