WWII’s Eastern Front was by far the bloodiest theater of war the world has ever seen. It cost the lives of nearly 12 million combatants of which 4.3 million Axis troops including 3.55 million Germans – death tolls far in excess of those in the west 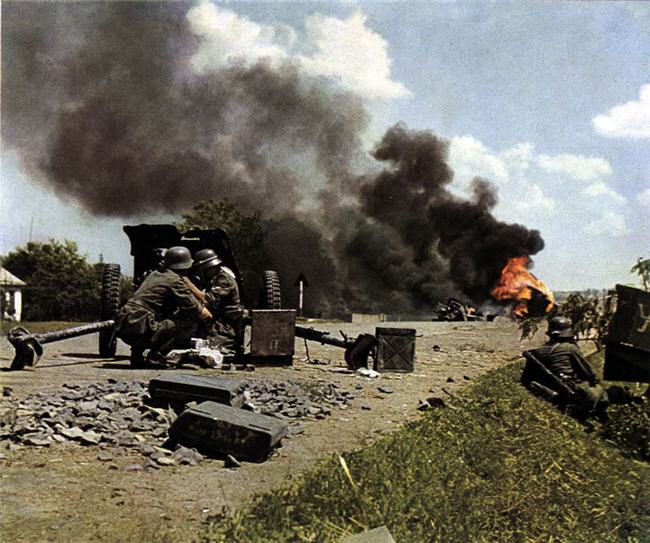 The best available estimate of WWII German military deaths comes from German historian Rüdiger Overmans. Most estimates are based on wartime casualty reports of the German military; but Overmans shows convincingly that the system was unreliable and eventually broke down, so that preceding estimates underestimate the number of German military men who fell in WWII.

Overmans, after extensive research of his own, put the total German military war dead at 5,318,000. This figure includes deaths of Volksturm militiamen and foreign volunteers of the Waffen SS and Wehrmacht. It does not include the deaths of Soviet citizens in German service.

Of these, 459,000 are known to have died in captivity, including 363,000 as prisoners of the Soviets. Overmans suggests the figure of German POWs who perished in Soviet captivity may be far higher than the 363,000 recorded deaths, and could reach as many as one million men. This is speculation, however, since Overmans, working from the German archives, had no way to study the subject.

The Russian historian Krivosheev, who was better positioned to study the subject, instead estimates there were a total of 450,000 German POW deaths in Soviet hands, including the deaths of 94,000 prisoners who never made it to POW camps and whose deaths are thus not reflected in their records.

After reducing his 5,318,000 figure by 459,000 confirmed POW deaths, Overmans distributes the rest (which necessarily includes the 94,000 unrecorded POW deaths in Soviet hands and another 22,000 German military men executed by their own side), as follows:

As said of the 1,230,000 German dead in the final battles of WWII according to Overmans, at least two-thirds were in the East.

The figure of 104,000 killed in the Balkans includes casualties sustained against Yugoslav and Greek partisans as well as those killed as the Red Army swept much of the region in late 1944.

Fighting in Northern Europe corresponds to the Norwegian campaign against the western allies, the “Lapland War” against Finland in 1944/and most of all the fighting against Soviet forces in northern Finland and the Russian Karelia region around Murmansk.

The German dead in sea battles and in the air war over Germany would have been overwhelmingly due to western allies, but the Soviets must have extracted a non-insignificant toll as well.

Taking everything into account by a conservative estimate, German KIA to Soviets is just over 3.5 million. This would include 2,743,000 for the Eastern Front, 820,000 for final battles in Germany, as well as a guesstimated 100,000 in the Balkans, Northern Europe, and the seas; reduced by 94,000 unrecorded deaths in Soviet captivity and 20,000 executed on the Eastern Front.

Nor is this the extent of Axis KIA sustained fighting Soviet forces. According to Krivosheev, some 215,000 Soviet citizens were killed fighting in German uniform of the army, auxiliary police, or the Waffen SS.

1941-45 Finland, for which there is reliable data, suffered some 60,000 KIA. For the other Axis participants figures are somewhat elusive.

By some estimates Italy lost over 90,000 military men on the Eastern Front including some 50,000 who perished after being captured by Soviets.

Krivosheev gives figures for Hungarian and Romanian military dead less POWs as 350,000 and 480,000 respectively; but this is likely an exaggeration.

Going from the fact 300,000 Hungarian soldiers are believed to have died in WWII, and Krivosheev estimates 55,000 deaths in Soviet captivity, between 200,000 and 250,000 may have been killed in battles against the Red Army.

Romania left the Axis in August 1944, but contributed twice as many troops to the Eastern Front as Hungary before that. Its battle dead to the Red Army is therefore at least as high as that of Hungary, and probably higher.

Roughly speaking, against the Soviets, Axis forces suffered the loss of some 4.3 military men including 3.55 million Germans, 0.2 million Soviet collaborators and over 0.5 million Axis allies. These are military combat deaths without counting any POW deaths.

As I have argued, the corresponding figure for Soviet forces is 7.5 million, of which 7.25 were million Red Army regulars. Adding fatalities sustained by Polish, Czechoslovak, Romanian, and Bulgarian units subordinate to the Soviets, but nor part of the Red Army, might push up the number of allied dead in the east to 7.6 million.

This gives a rough ratio of losses in the east of 1:1.8  (4.3 million compared to 7.6 million).* The ratio, while in Axis favor, gives lie to the often held impression of Soviet forces as fighting the war by unleashing trainloads of barely armed or unarmed men in massive “human wave” attacks to overcome the enemy by the sheer weight of their numbers.

Discounting the first two years of war which hit the Soviet Union unprepared and in which the Red Army was the most mismanaged, the ratio is even more balanced. In fact, since Soviet losses disproportionately occured in the disastrous early stage of the war and the German losses in the final stage of the war, the losses ratio towards the end of the war, and in the best-executed Soviet operations, was actually in the Soviets’ favor.

* Ratios more to the disadvantage of the Soviet side frequently encompass all Soviet military death disregarding the fact that over 3 million of them perished in Wehrmacth POW camps, underestimate German losses by incoroporating only reported deaths and omit Germany’s Axis allies in the east.