Jorge Martín | In Defence of Marxism 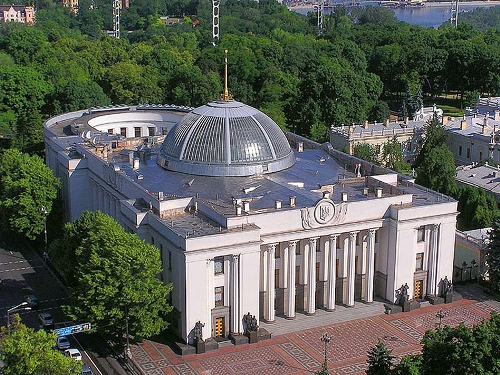 On April 9, the Ukrainian Rada passed 4 pieces of legislation submitted by the government that ban all symbols and propaganda of communism. After the law comes into effect, any monuments of communist figures which have not already been destroyed by fascist thugs in the last few months must be demolished. As well, any cities and streets which are named after communists are to be renamed.

Originally published on the Solidarity with the Anti-Fascist Resistance in Ukraine blog.

In order to justify this legislation, the ruling parties have resorted to the trick of equating Communism and Nazism. Thus, the preamble of the law says: “The draft law is aimed at condemning Communist and National Socialist (Nazi) criminal totalitarian regimes at the legislative level, implementation of the ban on public denial of the criminal nature of totalitarian regimes, banning public use of symbols and propaganda, the introduction of the State’s obligation to carry out an investigation and disclosure the crimes committed by members of these totalitarian regimes to prevent the recurrence of such crimes in the future, eliminate threats to the sovereignty, territorial integrity and national security of Ukraine, as well as for historical justice”

The law specifically mentions the “production”, “circulation” or “public utilisation” of symbols of these “totalitarian regimes”. The list of banned items includes the Soviet flag and anthem as well as monuments and historical plaques commemorating communist leaders. Penalties for violating the law range from five to 10 years. The anti-propaganda legislation is concerned with communist symbols from 1917 to 1991. 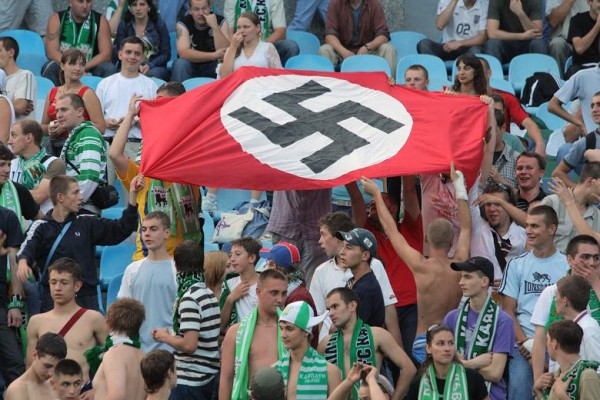 Right Sector hooligans display Nazi symbols every chance they get. But the Western media always manages to miss them.

Of course, the condemnation of Nazism is just a fig leaf. In the same breath, the Rada passed the law “On Legal Status and to commemorate fighters for Ukraine’s independence in the twentieth century.” This law lists dozens of organisations which are recognised as Ukranian freedom fighters, including those which collaborated with the Nazis and carried out massacres of Jews, Poles and others, like the Organisation of Ukrainian Nationalists and the Ukrainian Insurgent Army. Their symbols are widely used by far-right organisations and paramilitary fascists organisations which are now part of the state apparatus.

In fact, just a few days ago, the leader of the Right Sector, Dmytro Yarosh, who sees himself as the inheritor of the tradition of nazi-collaborator Stepan Bandera and his OUN-UPA organisations, was appointed as Advisor to the Chief of General Staff of the Armed Forces. 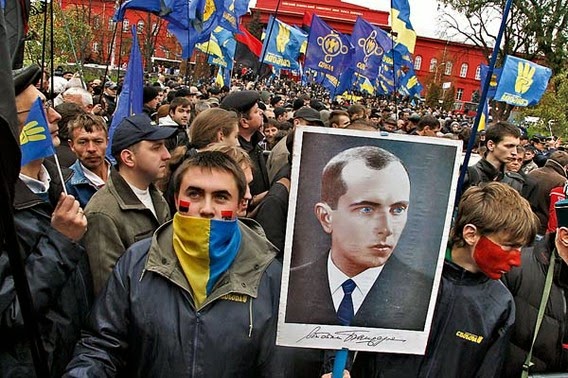 Another organisation specifically mentioned by the law is the Hetmanate, a short lived anti-socialist German backed dictatorship which existed in 1918. With this, the re-writing of history by present day Ukrainian patriots reaches the absurd. The Hetmanate only existed because of German and Austro-Hungarian support. The commanding staff of its armed forces were all officers of the Russian Imperial Army who were defeated by the Bolsheviks, while the Hetmanate was widely opposed by Ukranians of different political persuasions at that time. That such an organisation can be considered as part of “the struggle for the independence of Ukraine” clearly demonstrates that in fact what is being legitimised and protected is anti-communism and anti-socialism.

To add insult to injury, these new laws also downgrade the May 9th Victory Day celebration by creating an additional Remembrance and Reconciliation Day in Ukraine on May 8 “to commemorate all the victims of World War II”. Presumably that means the celebration of those who died fighting on the Nazis’ side. The term Great Patriotic War will no longer be officially used. Victory Day will remain a holiday, but the remembrance ceremonies will not include any Soviet symbols, under the new law. Since it was the Soviet Union which played a decisive role in the defeat of Nazism, one wonders what will be the meaning of that celebration if Soviet symbols are banned.

The law against communist symbols was proposed by far right Radical Party leader Oleg Lyashko and passed with the votes of two hundred and fifty-four MPs, with the required minimum being 226 votes.

These laws have been passed in the middle of a new escalation of attempts to ban the Communist Party of Ukraine and on the eve of the celebration of the 70th anniversary of Victory Day, when Nazi Germany capitulated to the Soviet Union.