Poland as the ‘Slavic Turkey’ of NATO Destabilization

By ANDREW KORYBKO (USA)
THIS IS A REPOST. THE ESSAY REMINDS US OF THE ROLE THAT REGIONAL NATO PUPPET STATES PLAYED AND STILL PLAY IN AMERICA’S ENCIRCLEMENT STRATEGY AGAINST RUSSIA. 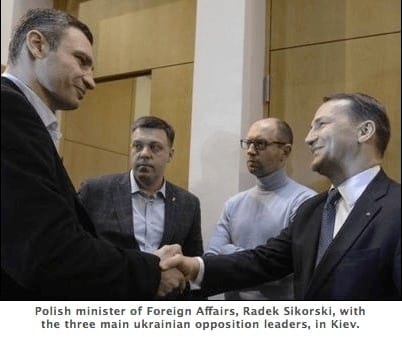 Poland, the eager American servant that it has been, has now officially taken on the role of the ‘Slavic Turkey’ in relation to Ukraine. Just as Turkey has been a geopolitically convenient conduit for arms, personnel, and material support for the Syrian terrorists, so too has Poland begun to officially fulfill this role for their Ukrainian counterparts.

Prime Minister Tusk stated on 20 February, 2014 that Poland was already treating the injured insurgents from Kiev, and has actually ordered the military and interior ministry to provide hospitals to help even more. The deputy health minister has confirmed that Warsaw is in contact with the rebels in Kiev “in making plans to take in Ukrainian wounded”. This means that Poland has formally extended its covert and diplomatic reach nearly 300 miles into the interior of Ukraine, and that its intelligence services are obviously doing more in Ukraine than just ‘helping the wounded’ (terrorists). It is even more likely that Polish influence is even stronger in Lviv and Volyn Oblasts, the regions bordering Poland, and coincidentally or not, Lviv has already attempted to declare independence. The same can be said of Turkish influence deep into Syria at the height of the crisis in that country, and one must be reminded of the fact that Turkey also helped the wounded [anti-government] fighters in that country recover on its territory.

The structural similarities between Poland and Turkey in relation to Ukraine and Syria need to be examined in order to more clearly understand how the ‘Lead from Behind’ template has been applied to both case studies. 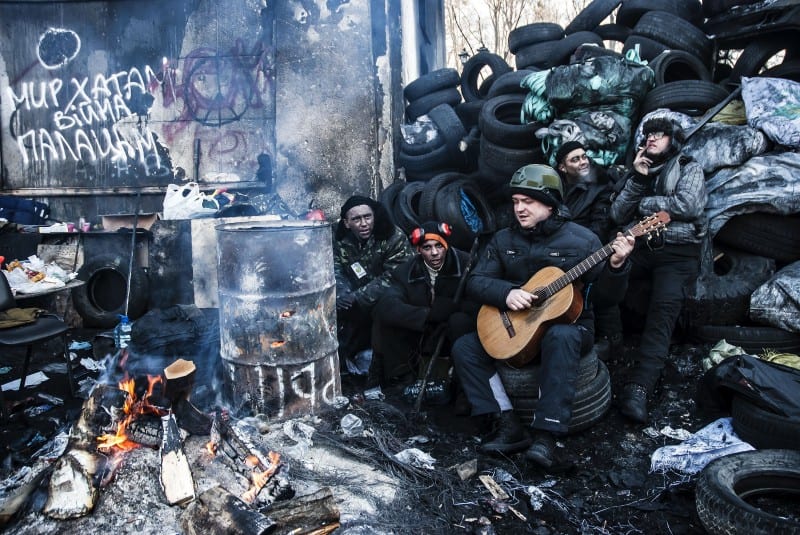 Maidan protesters in Kiev enjoy their victory in the knowledge that Washington and NATO stand behind them.

First of all, the ‘Lead from Behind’ strategy has been defined as “discreet U.S. military assistance with [others] doing the trumpeting”. It is the new strategy of warfare for theaters where the US, for whatever reasons, is reluctant to directly militarily engage itself. It relies on using regional allies/’leaders’ as proxies to further US geostrategic and geopolitical goals via asymmetrical measures while Washington pivots to Asia, where it aims to present a conventional deterrent to China. Both Poland and Turkey are the US’ puppets of choice in their respective theaters against their neighboring targeted states (Ukraine and Syria). At the least, the US provides intelligence support and the training of ‘opposition’ units, while Poland and Turkey pull the weight in directly assisting those members during their deployments in the victimized nations. In the case of Ukraine, the US utilized NGOs to infiltrate the country over a more than 10-year period and also allocated $5 billion to “help Ukraine achieve [the development of democratic institutions]”. The National Endowment for Democracy has also been pivotal in peddling the ‘Kony 2012 of Ukraine’ in order to advance their psy-op campaign against Kiev, just as ‘Syrian Danny’ was the version deployed against Damascus.

But the similarities do not end there.

Both Poland and Turkey are frontier NATO states, with Poland being described as “the largest and most important NATO frontline state in terms of military, political and economic power.” These two geostrategic states also have an overwhelming population when compared to their neighbors, as well as national inferiority complexes stemming from their lost imperial legacies (the Polish-Lithuanian Commonwealth and the Ottoman Empire). They share a significant land border with the states targeted for a ‘democratic transition’, as well as important cultural and political connections with those societies (as a result of the aforementioned imperial legacies) prior to the unleashing of the respective crises. This gives them significant intangible benefits over the future battlefield, both in state, non-state, and informational activities.

[dropcap]P[/dropcap]oland and Turkey also host important American military installations. Turkey houses the US Air Force at Incirlik and an anti-missile defense radar in the east, while Poland provides the US with the Lask Air Force Base and an anti-missile defense outpost in the northeast near Kaliningrad. In regards to the development of the insurgents’ mission, the Ukrainian Fascists are taking on disturbingly similar characteristics to the Jihadists in Syria. In 2011, random sniper fire (attributed to the ‘rebels’) was targeting civilians in Damascus, just as the same has begun to occur in Kiev, even targeting a reporter from RT. The Lviv request for independence can be seen as following the declaration of autonomy of Syria’s Kurds, as both areas abut the border of the proxy state interfering in the affairs of its neighbor. In a similar fashion, both insurgent groups have taken over border control posts connected to their patron state, and this move obviously increases the ease with which Ankara and Warsaw can funnel arms, personnel, and materials to their subversive spawn. When the borders cannot be held by the insurgents, they resort to ransacking government depots and stealing arms from captured government forces and occupied buildings.   The Syrian fighters have a history of hostage taking and brutal executions, and their Ukrainian comrades have followed their lead by capturing over 60 police officers in Kiev.

It has thus clearly been demonstratively shown via the aforementioned examples that the destabilizations of both Ukraine and Syria are modelled off of a patterned approach. The US utilizes proxy states with injured imperial legacies in order to advance its ‘Lead from Behind’ strategy, targeting pivotal geostrategic areas where the US prefers to maintain a plausible deniability over its role and is reluctant to get too directly involved. One can also discern a larger trend developing – the use of extreme macro-regional ideological movements to support long-term destabilization. In the Middle East, extreme Islam is the method of choice for application and export, whereas in Ukraine, it is increasingly appearing as though extreme far-right (in some applications, even Neo-Nazi) group fit the ‘Wahhabi role’ for Europe. Ukraine could quite possibly become a training ground for other European far-right militants, or the ones currently in Ukraine can go on to teach the ‘tools of their trade’ to the highest bidder in other European states. Just as Turkey is supporting the extreme Islamists in Syria via its support for the fighters there, Poland can be said to be flirting with extreme far-right nationalists in Ukraine through its statements of support for the violent opposition and its recent decision to evacuate and help the wounded insurgents (not even counting the unreported level of covert involvement already ongoing). And just as the extreme Islamists got out of the control of their handlers and now endanger the entire Middle East, the risk remains that the extreme far-right nationalists may become uncontrollable in Ukraine as well and come to endanger the entire EU. When comparing Poland to Turkey and Ukraine to Syria, it is proven that the Arab Spring has come to Europe in more ways than meet the eye.

ABOUT THE AUTHOR
Andrew Korybko is an American Master’s Degree student at the Moscow State University of International Relations (MGIMO).

Putin and the Press: The West’s Demonization School of Journalism