ARMS DEALER TO THE WORLD
=By= Nazish Kolsy 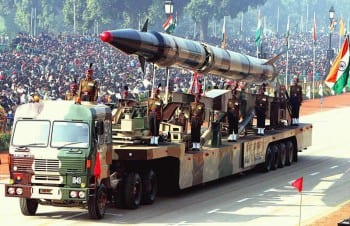 In early October, the world was reminded of the ongoing deterioration of Afghanistan when U.S. warplanes eviscerated a civilian hospital. For one brief moment, attention returned to the disasters that so often strike the lands of terror and combat, especially in the northern hinterlands of South Asia.

However, this sort of fleeting attention often ignores the deeper political games at play. Neighboring Pakistan, a country often ignored unless its name is mentioned alongside the dangers of the Taliban and negotiations with Afghanistan, has the fastest growing nuclear arsenal in the world.

Since 9/11, Pakistan has ranked among the top recipients of U.S. foreign aid, with its haul totaling $18 billion for fiscal years 2002-2015. However, this number only covers the amount used for economic development, humanitarian aid, and (especially) security-related assistance.

Pakistan has also received an additional $13 billion in Coalition Support Fund (CSF) payments that are meant to reimburse the country for its support of U.S. military operations in Afghanistan. For the 2016 fiscal year, the Obama administration requested $794 million for aid to Pakistan — a 10 percent decrease from 2015 — while the country’s CSF allotment has dropped from $1.2 billion per year in 2010 to $300 million in recent years as the U.S. looks to wind down its military role in the region.

Still, it’s a huge figure. So where does CSF money go? How has that $13 billion been distributed?

Suffice it to say those funds aren’t spent on rehabilitating or relocating the millions of people displaced by years of military operations in the country’s northwest. Instead, they’re funneled back into military spending and counterterrorism efforts. It becomes a vicious cycle of never-ending defense spending — which includes a rapid build-up of the country’s nuclear arsenal.

That nuclear arsenal is Pakistan’s ultimate defense against India — the neighboring nation it’s fought three wars against. Complicating matters, the United States has entered a nuclear agreement with India. That 2005 deal allows India to buy civil nuclear technology for its civilian program, which is subject to international inspections, but didn’t put any limits on its military nuclear program, which is exempt.

Pakistan and India, neither of which signed the Nuclear Nonproliferation Treaty, are heavily involved in the nuclear arms race in the greater South Asian region. Pakistan’s accelerating nuclear weapons program is a cause for concern for U.S. officials, who are seeking to make a deal with Pakistan to limit its nuclear arsenal. However, these efforts may prove futile, considering the importance the country places on nuclear weapons in its standoff with India.

Meanwhile, as U.S. aid gradually lessens, Pakistan has pivoted to other powerful allies for financial assistance. China and Russia are key sources of economic and military support, with China promising $46 billion in development aid — making up for the cuts made by the United States and then some.

So while the United States remains on good terms with India, it finds itself subsidizing Pakistan’s nuclear arsenal — the fastest-growing in the world — even as the country drifts closer to China and Russia. And all that’s in the interest of fighting a militant group, the Taliban, that’s received ample support from the Pakistani security establishment over the years.

This should be interesting.

Nazish Kolsy is a contributor to Foreign Policy In Focus

How West, Central and South Asia are interconnecting

The cause of tension between China and India

India Will Come To Regret Its Annexation Of...

Why India will likely ally with...