Home BOOK NOTES The Politics of the Right

The Politics of the Right 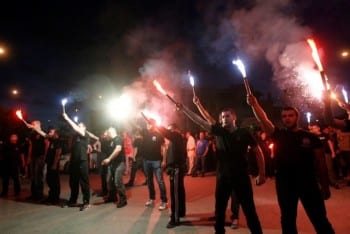 [dropcap]F[/dropcap]ar-right forces are on the move in and out of the U.S. Socialist Register 2016: The Politics of the Right, edited by Leo Panitch and Greg Albo, delivers crisp analyses of this trend. The 19 essays are wide-ranging. Contributors examine right-wing politics in an era of rising economic integration, e.g., globalization of capitalism.

Against the backdrop of hard-right currents in Brazil, Canada, France, Greece, India, Israel, Japan, Russia, Ukraine, the UK, and U.S., a history of fascism from the 1930s looms large. This is a necessary but insufficient explanation for today’s politics. In the U.S., hard-right politics takes the garb of GOP candidates for president tacking hard against migrants and Muslims. Meanwhile, insurgent movements from below promote individual rights of property owners that the federal government is trampling.

Bill Fletcher traces the latter tendency to the legacy of the Confederate States of America (CSA), “an oddity of U.S. history.” In brief, a CSA-influenced “origin myth” defines worthy and unworthy people in America. What Fletcher terms “right-wing populism” is a cross-class movement, one that prioritizes white privilege while disempowering labor generally. That process “sets about redefining the nation-state, its history and the ‘relevant’ population(s) constituting it.”

The rise of GOP presidential candidate Donald Trump personifies a far-right trend in the U.S. Financial journalist Doug Henwood reveals how the right wing has shifted to the center from the periphery. In this shift, Bill and Hillary Clinton are central figures. Aping the right, the duo have pushed the Democratic Party away from a labor-led New Deal focus to one of monopoly-finance capital, e.g., the big banks taxpayers bailed out in 2008.

According to Michael Löwy and Francis Sitel, the success of the far right Front National in France is in no small measure a result of “capitalist neoliberal globalization.” This process, fueled by the interests of capital, fosters “chauvinist forms of religion and religious forms of nationalism.” In France, the hard right has penetrated state institutions. Aijaz Ahmad explains the politics of India’s hard right, where it dominates.

The Bharatiya Janata Party rules the political system, a “right-wing front of the extreme right that is represented primarily by the Rashtriya Swayamsevak Sangh.” Under Prime Minister Narenda Modi, India’s ruling bloc employs a “religio-cultural definition of nationhood … (that) functions very much the way theories of race used to function in Nazi ideology.” Modi visits the U.S. to heavenly praise. Under his rule in the world’s second-most populous nation, majority Hindu and minority Muslim, India’s right-wing politics marches on in the face of a weak working-class movement.

As a result, India’s “liberal center is moving further and further to the right,” according to Ahmad. A very similar process is underway in Israel, Avishai Ehrlich writes, opening with Israel’s slaughter of Gaza’s civilians in summer 2014. A recurring theme in the book is the process of political centrism drifting to the right. This move enhances authoritarianism, a cultural feature of modern politics in the post September 11 era. Further, the institution of religion helps to spread right-wing politics in Brazil, according to Alfredo Saad-Filho and Armando Boito. Such a strategy serves to weaken progressive politics, Uncle Sam’s larger aim in Latin America.

At the same time, governments such as the U.S. surveil whole populations in concert with the corporate sector, as Reg Whitaker unpacks, with some unexpected results. The major example of this is the Edward Snowden revelations, which turns the surveillance model back on the corporate-government alliance. Hard right politics dovetails with policing of national minorities. Lesley Wood outlines three related trends: “intelligence-led policing, community policing and strategic incapacitation protest policing,” which confront movements such as Black Lives Matter, pushing back for public control over this state function.  Socialist Register 2016 delivers specificities of hard-right politics near and far. It is essential reading.

Seth Sandronsky is a journalist and member of the Pacific Media Workers Guild. Email sethsandronsky@gmail.com.

Miracle in Texas: Rancher’s vegan wife sets out to save cattle

You are under contrôle: French elites privately fear...

You are under contrôle: French elites...