Home ABOMINATIONS Paul Craig Roberts: Declining America & How Much Death and Destruction Awaits Us in 2018?

Paul Craig Roberts: Declining America & How Much Death and Destruction Awaits Us in 2018?

I told you I would be back this week, but it is only by the skin of my teeth. When I returned my rental car at the Atlanta airport on Sunday, December 17, I inquired about the location of the train that takes you to the terminal.

The response was that the train was not working, but busses would take you to the terminal. I went to the alleged buses only to find masses of people waiting in a growing line several hundred yards in length in the outside cold without any information except the complete power faiure of the entire airport. There were no busses.

As you know, I sometimes refer to “dumbshit Americans,” and now I must confess that I was one for about an hour before I realized that a complete power failure at the Atlanta Airport, due to the inability of the airport authorities to keep an eye on the power system, meant that an airport that over-sized would not recover until long after the power did, which never happened on Sunday.

Disturbed by my absence of instantaneous wits, I quickly abandoned my place in a line that never achieved its purpose and rented a car which I drove to my home destination.

Free market economists are opposed to planning, and that is why airports get so large that they are dysfunctional. The shutdown of Atlanta affected far more than the airlines. How is it that an airport the size of Atlanta doesn’t have backup grids serving it?

There are reports that there were people kept onboard airliners for 6 hours that never were able to take off. What happened to the endless line of people waiting on busses to take them to an airport that was closed? They never understood that they were waiting for Godot. There was no transportation out of that place except car rentals. If you were the last to realize, you were trapped.

This is America today. Nothing works. When I was born America was a superpower. Today it is a Third World Country Yet the politicians in Washington think that America is still a major power when in fact America can’t even provide jobs for its work force. After 16 years and a trillion dollars, America has failed to defeat a few thousand lightly armed Taliban in Afghanistan. It was up to the Russians to destroy ISIS.

As soon as I left the Atlanta airport car rental onto the Interstate highway I noticed that in place of my speed the reading said no passenger side rear brake light. This was a premium car rental. I had been rented a car that no one of many employees had bothered to check. The car also had damage to the rear bumper that was not marked on my rental agreement. Luckily for me, despite all the confusion I had the presence of mind to walk around the car before I drove off and secured an acknowledgement of the existing damage. Otherwise, I would have faced a $2,000 or $ 3,000 damage charge.

So, go be a Proud American, like Trump wants you to be. [/su_panel] 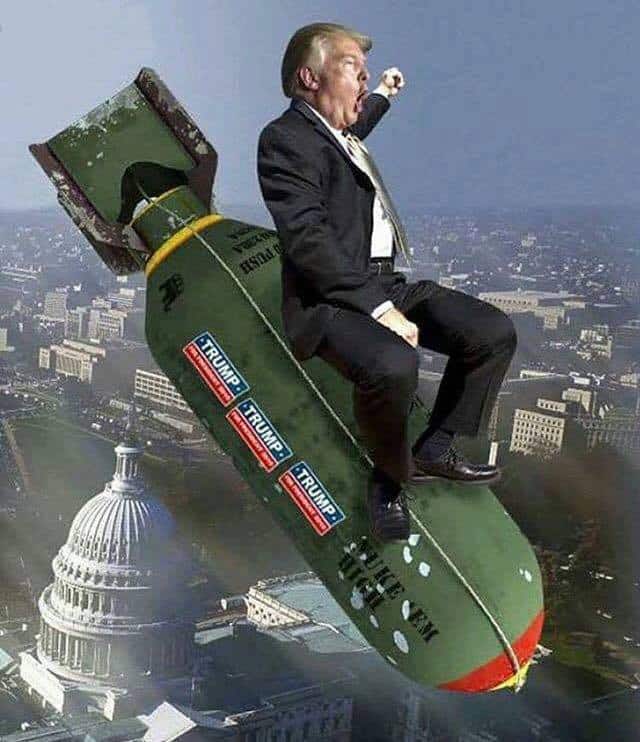 How Much Death and Destrution Awaits Us in 2018?

Dateline: December 30, 2017
The New Year is one full of economic, political, and war threats.

Among the economic threats are stock, bond, and real estate markets artificially pumped up by years of central bank money creation and by false reports of full employment. It is an open question whether participants in these markets are aware that underlying reality does not support the asset values. Central banks support stock markets not only with abundant liquidity but also with direct stock purchases. The Japanese central bank is now one of the largest owners of Japanese equities. Central banks, which are supposed to provide economic stability, have created a massive fraud.

Throughout the Western world politics has degenerated into fraud. (1) No government serves the public’s interest. (See: https://www.paulcraigroberts.org/2017/12/29/eric-zuesse-explains-americas-worst-enemy/ ) Except for some former Soviet satellites in Eastern Europe, European governments have defied the will of the people by admitting vast numbers of refugees from Washington’s wars and others pretending to be refugees. The European governments further imperil their citizens with their support for Washington’s rising aggression toward Russia. The universal failure of democratic politics is leading directly to war.

The Saker explains that Americans with intelligence, honor, courage, and integrity have disappeared from the US national security establishment. In their place are arrogant morons high on hubris who believe: (1) We can buy anybody, (2) Those we cannot buy, we bully, (3) Those we cannot bully, we kill, (4) Nothing can happen to us, we live in total impunity no matter what we do. http://www.unz.com/tsaker/2018-war-or-no-war/

Scott Bennett reports that US soldiers are being propagandized that Russia is an enemy with whom we are headed to war. https://www.facebook.com/capsule.ninetynine.7/videos/1992321041038611/
The Anglo-Zionist empire is trying to overturn the Iranian agreement and to restart the attempt to overthrow the government of Syria. Lebanon’s Hezbollah is also in the empire’s sights. Washington is arming Ukraine in order to enable an attack on the breakaway provinces of Novorussia. Threats against North Korea escalate. Even little Venezuela is threatened with military intervention simply because the country wants to control its own destiny and not be controlled by Washington and the New York banks.

In the opinion of some, Russia’s very cautious diplomacy has increased the likelihood that Washington will miscalculate and give the world a third world war. By not accepting the requests of the breakaway Russian provinces in Ukraine to be reunited with Russia, the Russian government paved the way for Washington to provide the military means for its Ukrainian puppet to attempt to reconquer the provinces. Success would damage Russian prestige and encourage Washington in its aggressive actions. Sooner or later Russia will have to stand and fight.

Russia’s premature declaration of victory in Syria and withdrawal has made it possible for US forces to remain in Syria and attempt to restart the effort to overthrow the Assad government. Russia would have to defend its victory, or by the failure to do so encourage more aggressive actions by Washington.

Hopes have evaporated that President Trump would restore the normalized relations between the nuclear powers that Reagan and Gorbachev made possible. The question for the New Year is when does Washington’s aggression against Russia ignite a hot war.

Your website will be examining these issues as they unfold in 2018. From the perspective of today, it is unlikely that the New Year will be a happy one. Nowhere in the West is there a sign of leadership toward peace and the well-being of humanity.

(1) In terms of its foreign policy the US has been criminal and fraudulent for at least 150 years, and counting. Its entire foreign policy, wrapped in Orwellian lies, is a long list of crimes. In the domestic arrea, the US had a highly defective (plutocrat-controlled democracy from the very start, with some degree of responsiveness to the public will due to its higher degree of class mobilization. Now that all of that has vanished, and that the media are 100% simply an instrument for the propaganda of the imperial plutocratic regime controlling Washington and its vast agencies of global destruction, domestic policy has also degenerated to a level that completely erases the notion of any democratic accountability or loyal representativeness in the halls of power.

Paul Craig Roberts is a former Assistant Secretary of the US Treasury and Associate Editor of the Wall Street Journal. Roberts’ How the Economy Was Lost is now available from CounterPunch in electronic format. His latest book is The Neoconservative Threat to World Order.
News

THE MOST HATED MAN WHO EVER LIVED