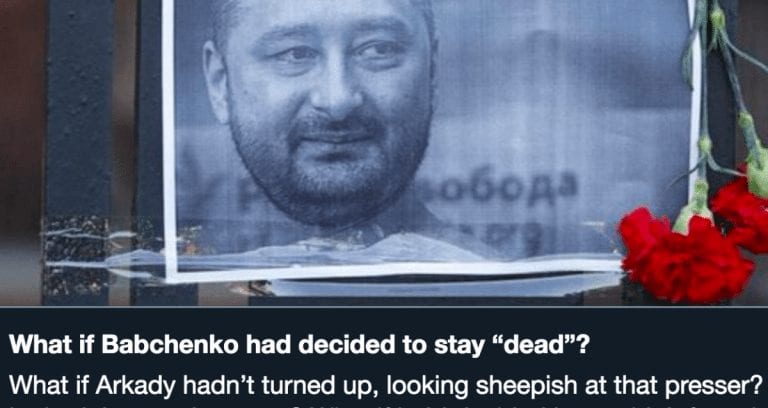 Babchenko was dead, to begin with. There was no doubt whatever about that. News reports had been aired, mournful obituaries published, outraged tweets cursing Moscow flew hither and thither. Ukrainian Prime Minister Volodymyr Groysman condemned “the Russian totalitarian machine” for assassinating a journalist simply because of his “honesty and principled stance”. (sic) UK Foreign Minister Boris Johnson proclaimed  that he was “Appalled to see another vocal Russian journalist, Arkady Babchenko, murdered.”

Not a soul questioned it: old Babchenko was as dead as a door-nail.

And then, like the ghost of an old business partner announcing three Christmas visitations, there he was. Everyone knew that Babchenko was dead. They didn’t suspect it, they weren’t relatively confident about it. They knew it.

And it was all fake.

This article makes a hugely important point: had Babchenko decided to stay "dead" and gone into hiding, his death would have been taken as unquestionable fact by unquestioning press & politicians, and anyone doubting it labeled a crazy conspiracy theorist.https://t.co/7jlId4oYR6

The main purpose of this article is to draw attention to an important op-ed by an Off-Guardian  editor which asks us to consider a hugely significant hypothetical question: what if Babchenko had, for whatever reason, remained “dead”? What if, instead of appearing at a press conference the day after his faked assassination publicly apologizing to his poor traumatized wife, the controversial Russian journalist Arkady Babchenko had put on a wig, obtained some fake papers, and started a new life in Hawaii? What would have happened then?

Anyone who has ever publicly expressed doubt about any part of the establishment Russia narrative already knows the answer to that question. Any skepticism toward the CIA/CNN-authorized official story about the Skripals, Douma, the Democratic Party emails published by WikiLeaks or what have you is immediately attacked as deranged, bat shit crazy conspiratorial lunacy suitable only for helping Alex Jones sell fluoride-resistant testicle supplements. Anyone disputing the claim that Putin had personally ordered the assassination of Arkady Babchenko would have been publicly smeared as a Kremlin shill by #Resistance pundits and senior Atlantic Council fellows, and anyone questioning whether he was dead at all would have been laughed out of the room.

But he wasn’t assassinated, he isn’t dead, and pretty much the whole thing appears to have been fake from top to bottom. As explained here by Moon of Alabama (who is a great source of information and frankly far more skillful than I am at picking apart these anti-Russia narratives as they emerge), “The killing, the killer and the operator who hired the killer were all fakes.”

Let me break that down a bit:

In short, as far as the information we have access to right now is concerned, there is no body, no victim, no middle man, and no assassin. All there is is the Ukrainian government saying in an authoritative tone of voice that the Kremlin probably wanted to kill a journalist who has been critical of Moscow. Which, of course, they’d have every motive in the world to say about a major geopolitical rival of the western empire that Kiev is currently aligned with.

Moon of Alabama lays out a solid case that this particular incident had a lot more to do with a corporate power grab by corrupt plutocrats than journalists or geopolitics; Russia just makes a convenient thing to blame in the current unquestioning environment where western power structures are all too eager to concoct a narrative against Russia, in much the same way a black man could be easily framed for the crimes of a white man in the Jim Crow American south. The western news media was told to report something, and they unquestioningly did as they were told.

Just sit with the implications of what this means for a minute. Really let it sink in nice and deep. How hard was it for the Ukrainian government to do that? How much resistance did they encounter in lying to the world about an assassination, instantly blaming Moscow with no evidence whatsoever, and transforming a complete falsehood into established fact? Any whatsoever? At all?

The establishment spin machine is churning its gears trying to re-frame this into something less incriminating, but the facts are already out there: any government in the western empire can, at any time, concoct a lie about Russia, and there are exactly zero safeguards in place preventing that lie from being promulgated as established, unquestionable fact by western mass media and politicians.

Appalled to see another vocal Russian journalist, Arkady Babchenko, murdered. My thoughts are with his wife and young daughter. We must defend freedom of speech and it is vital that those responsible are now held to account.

The US-centralized empire has been plotting the destruction of Russia for many years. There is far too much power and money invested in the unipolar world for anyone at the top to willingly risk the re-emergence of another rival superpower, be it Russia, China, or an unsympathetic alliance in the Middle East. Any analyses of the accusations America or its allies make against any of these governments which do not factor in their clear and obvious motives to manipulate the narrative are inherently flawed, but no one ever includes that obvious factor in their analysis. There is a built-in assumption that only governments like Russia or Iran ever lie, and that western governments have safeguards in place to prevent that. Plainly, they do not.

Every single disputed accusation against the Russian government is fair game for loud, aggressive, thorough, unrelenting skepticism. Every single one, without exception. Anyone who wants you to believe otherwise is brain poison.

Internet censorship is getting pretty bad, so best way to keep seeing my daily articles is to get on the mailing list for my website, so you’ll get an email notification for everything I publish. My articles and podcasts are entirely reader and listener-funded, so if you enjoyed this piece please consider sharing it around, liking me on Facebook, following my antics on Twitter, checking out my podcast, throwing some money into my hat on Patreon or Paypal, or buying my book Woke: A Field Guide for Utopia Preppers.

Ukraine – The Babchenko Hoax Was Part Of A Corporate Raid