HELP ENLIGHTEN YOUR FELLOWS. BE SURE TO PASS THIS ON. SURVIVAL DEPENDS ON IT.
A dispatch from Telesur TV
Lawmakers, activists, and citizens fear PES will use the positions granted to them to hamper efforts to advance women’s and LGBT+ rights.
Incoming Mexican President Andres Manuel Lopez Obrador has handed the right to appoint the head of legislative chairs for the Culture and Health Commissions to the conservative evangelical Social Encounter Party (PES), which formed part of his winning coalition in July, sparking outrage among socially progressive groups and sectors in the country. 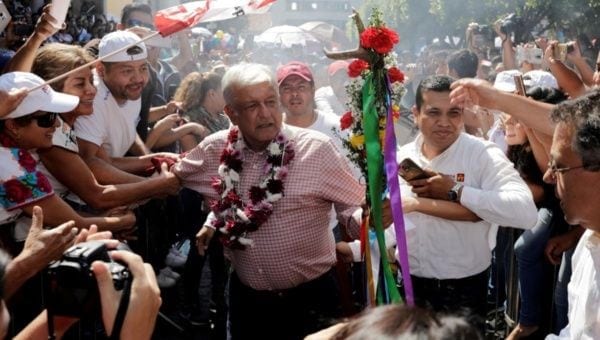 Lawmakers, activists, and citizens fear PES, which garnered little support while in the electoral coalition with Lopez Obrador’s National Renewal Movement (Morena), will use the positions granted to them to hamper efforts in the House of Representatives to advance women’s rights and LGBT+ issues.

Groups representing the interest of these communities have branded the move as a betrayal of several electoral promises made by AMLO and members of Morena, and have called for a reversal of the decision.

In a collective statement issued by the Mexican LGBTTTI+ Coalition, more than 100 human rights organizations said PES’s ‘anti-rights and anti-democratic’ ideology shouldn’t have any influence over legislation, which is “key for the recognition of women, trans and intersex people’s right to make decisions about their own bodies.”

PES has in the past opposed bills to advance abortion rights and gender equality in Mexico, and the coalition said its ideology “goes against those of a leftist government that aims to advance … equality” in the country.

Morena officials have said their alliance with PES was strategic since they needed as many votes as possible to secure the presidency and a majority in both legislative chambers. However, Morena’s landslide victory on Jul. 1 proved that the alliance was unnecessary and the backlash received was much greater than the help it would have accounted for.

Members of Mexico’s artistic community have also expressed concern, fearing that PES’s privileged position would be used to promote censorship on artistic work based solely on religious beliefs and values.

Arturo Ripstein, a renowned Mexican filmmaker, said the appointments were akin to “giving a lamb as a gift for the ferocious wolf.”

“There’s nothing else to say. Saint Luis Buñuel, save me!” he said. “This is about an evangelical party that will always have an agenda that goes beyond culture. Culture is obviously liberty, everything that goes against this rule is against liberty.”

The Secular Republic Association, backed by lawmakers from political parties of different ideologies, have also sent a protest note to the Political Coordination Board arguing that PES can’t head these or any legislative commissions since it has lost its registry status as a political party and has failed to comply with the principles separating religious values and the state.

PES only received 2.33% of the national popular vote for the Senate and 2.40% in Chamber of Deputies in the July elections, and as such hold no actual political sway over either chamber.

Why is HBO’s Game of Thrones so popular?

Mexico, as It Is and Wasn’t—Fred Reed joins...

Can President-elect Lopez Obrador pull Mexico out of...

AMLO and the State of Mexico

Mexico: The People Won, But Can They Take...

In Mexico AMLO’s Approach To Ending The Cartel...