Home ABOMINATIONS US Concern for Cuba, Latin America is Spin for Intervention

July 19, 2021
Our articles depend on you for their effectiveness. Share with kin, coworkers and friends.

An astonishing level of hypocrisy and cold-blooded criminality is what defines the US ruling class and their accomplices.

The US government says it is going to help Central America fight corruption, will combat the “root causes” of migration in Mexico and Central America, and it wants to help the Cuban people with freedom too.
But the US’s domestic and foreign track record demonstrates that it isn’t qualified to teach anyone about democracy, combating poverty, ending corruption, or anything related to human rights. Instead, it’s recent discourse regarding Latin American countries is aimed at dressing itself, the bully, as the savior. 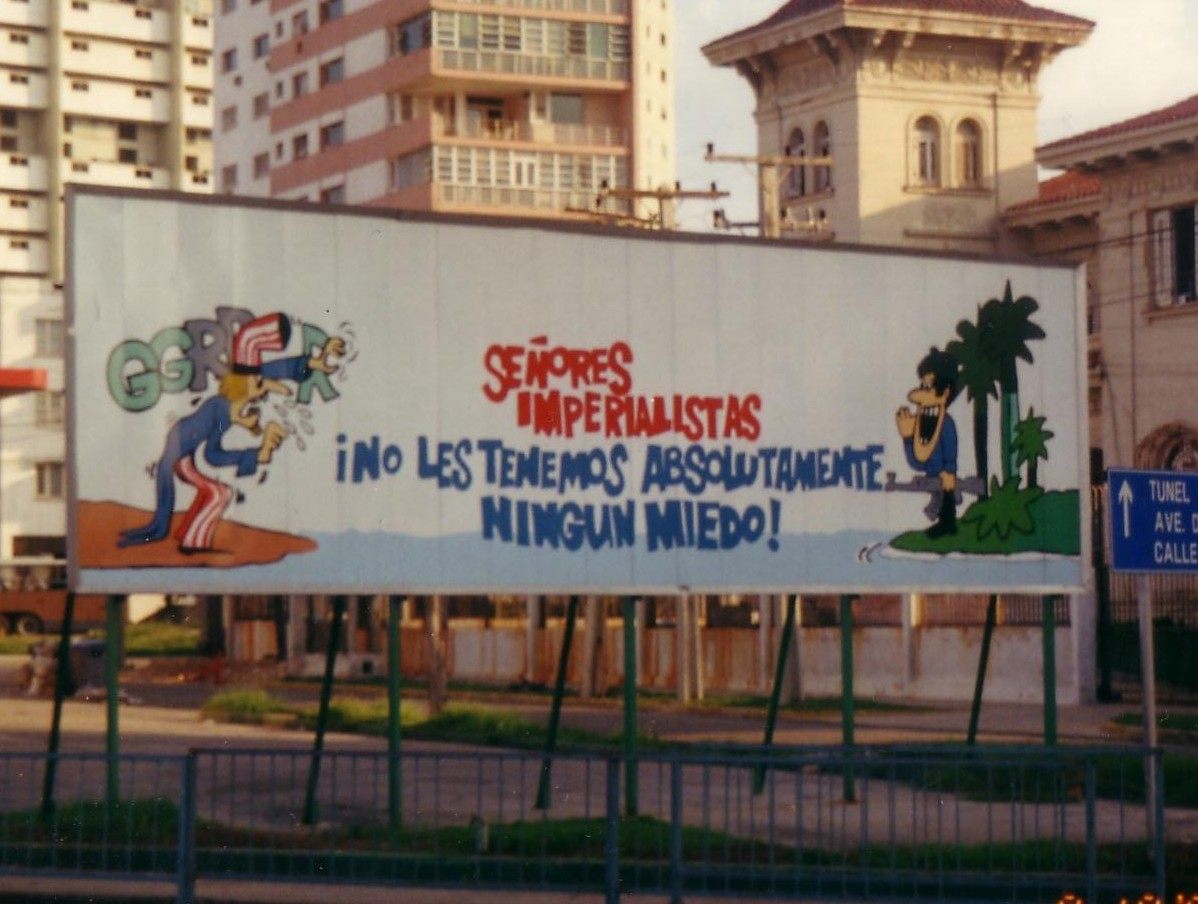 Typical Cuban defiance mixed with elegance: "Messrs. Imperialists, We are Not Afraid of You At All!" (Photograph Source: Idobi – CC BY-SA 3.0)

By manufacturing problems (ie by directly causing hunger and medicine shortages), as well as by magnifying or distorting existing problems and combining those with real hardships, the US has been framing its intervention and dominance in certain countries as help that no one can reasonably oppose. The help discourse makes it hard for many people to perceive the US’s real agenda and political interests, and it makes it very easy for the mainstream media to cover up the US’s desire to increase it’s exploitation of Latin America.

In US help speak, financial support for anti-government (read pro-US agenda) groups is spun as aid, particularly through USAID. Bringing a pro-US leader to power is framed as toppling a cruel dictator. Building towns where US corporations and manufacturing plants can do what ever they want (ie the ZEDES in Honduras, or industrial parks in Mexico) and imposing privatization policies on poor countries is called “freedom,” “democracy,” “investment” or “economic support.”

While the US’s blockade of Cuba for the past six decades has caused over US$144 billion in losses to the country’s economy, Biden this week sided with protests there, and called for “relief from the tragic grip of the pandemic … and economic suffering.” The blockade is what is causing severe shortages in Cuba, an oil crisis, and making it hard for the country to manufacture enough vaccines.

Democracy Now talked to Daniel Montero, an independent journalist in Havana who was arrested during the protests. He noted that the media had skipped over the fact that most people arrested were released the same day, and that there was violence by both police and protesters. He said the sanctions were the main cause of economic hardships, and the Cuban-USians in Florida calling for a military intervention in Cuba was “some of the most colonial behavior I’ve seen in my life.”

Biden called on the Cuban government to “refrain from violence” – a hypocritical stance given the police murders and repression in his own country. “We are assessing how we can be helpful to the people of Cuba,” said White House spokesperson Jen Psaki, using the savior discourse, but not considering repealing the sanctions. 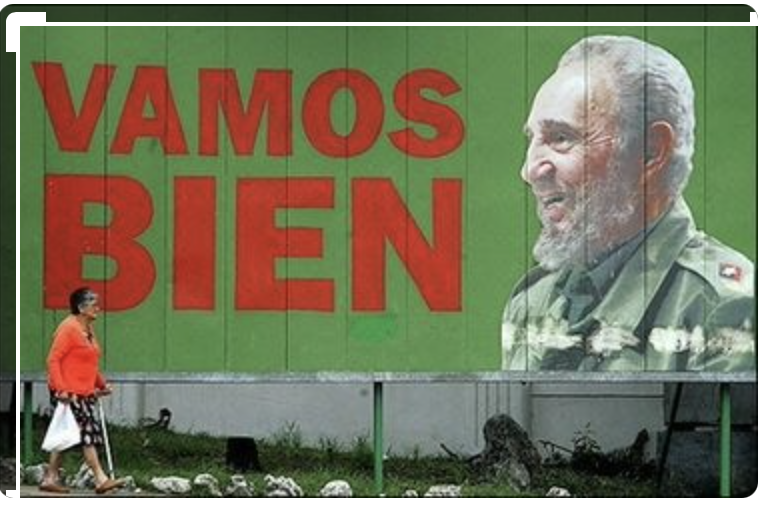 Meanwhile, US vice-president Kamala Harris has been making a show of helping Central America and Mexico by ostensibly addressing corruption and the “root causes” of migration in the region. Seven months into the year and no actual help has arrived, but she did tell migrants fleeing for their lives not to come to the US, and the US has kept its border closed – in stark violation of human rights and its own asylum seeker laws.

In June, the White House declared a “fight against corruption” in Central America and made it a US national security interest. In general, a security interest is code for war, intervention and attacks on countries that don’t conform to US interests. Further, the State Department was involved in the Car Wash anti-corruption operation in Brazil which saw pro-poor president Luiz Inacio Lula arrested. “A gift from the CIA,” said one US prosecutor of Lula’s imprisonment. The main liaison for the FBI at the time, Leslie Backschies, boasted that it had “toppled presidents in Brazil.”

During a press conference in May, Harris hinted at the US’s real intentions with the latest so-called fight against corruption, “In the Northern Triangle, we also know that corruption prevents us from creating the conditions on the ground to best attract investment.” Even the White House statement admits the anti-corruption efforts are about securing “a critical advantage for the United States.”

Crazy how the US needed to implement the longest embargo in modern human history with the explicit objective to cause starvation and unrest among the Cuban people for an ideology that is destined to fail ???????? https://t.co/5nZunhvEDY

The US government recently released its list of powerful corrupt figures in Central America who will be denied US visas. The list includes former Honduran president Jose Lobo, whom the US helped bring to power by supporting a coup in 2009, and a current legal advisor to the Salvadoran president. But it doesn’t include proven criminal and current Honduran president Juan Hernández – suggesting that political interests underlay the chosen figures.

The US also wants to increase the financing, resource support and “political assistance” for actors in foreign countries who “exhibit the desire to reduce corruption” (conveniently vague phrasing) and promote “partnerships with the private sector.” An Anticorruption Task Force will provide “training” to Central American authorities and US law enforcement experts will be deployed to “provide mentoring.” Here, it is worth noting the US’s long record in training coup leaders, repressive military leaders, and counter-revolutionaries.

For at least a century, the US has had an abusive relationship with Latin America, using it as a source of cheap labor, gutting its land for minerals, pillaging its resources, and demanding (in an authoritarian way – ironic, given its overtures to “freedom,”), total compliance with its self-benefiting trade policies.

When countries refuse to obey, when they assert their identity, strive for dignity, and combat poverty (and therefore that cheap supply of labor), the US reacts. It supported the counter-revolution in Nicaragua with money and training, the CIA carried out a coup to remove Guatemalan president Jacobo Arbenz and end the revolution there, the US sided with the coup plotters recently in Bolivia, it repeatedly supported anti-democratic movements to overthrow Chavez, and time and again it has tried to kill or remove the Cuban president.

It systematically supports repressive, conservative governments because they are the ones that protect its business interests. And despite its current discourse on the “root causes of migration,” the US consistently and violently opposes movements and governments that side with the poor and [which by implementing social justice] could actually decrease inequality and prevent forced migration.

The US, and the US-centric mainstream media, have two sets of standards: one for rebellious countries, and another for pro-US countries. That’s why the US and the media are speaking out about arrests in Cuba, while staying silent about disappearing activists and journalists in Mexico. It’s why the US State Department talked about the “violence and vandalism” of the protesters in Colombia recently instead of criticizing the brutal repression. Biden has publicly supported Plan Colombia (currently called Peace Colombia), which makes the country one of the largest buyers of US military equipment.

The two sets of standards are also why US Secretary of State Antony Blinken talked about Cubans being allowed to “determine their own future” – something he would never call for in most other countries of the world where the majority are excluded from economic and political decision making.

What we’re seeing at the moment regarding the US’s attitude towards Cuba is nothing new. I witnessed very similar tactics being employed in Venezuela. It was #SOSVenezuela placards and tweets when I was there, then #SOSEcuador was used against Correa while I was working in Ecuador, and now #SOSCuba is being used.

The formula also includes versions of the following: causing or worsening food and medicine scarcity through blockades and hoarding, a media campaign portraying the government as a dictatorial regime, marches by mostly white and upper-class people, media and social media coverage of anti government marches that exaggerates their size with selective visuals or even photos from other countries (or in the recent case of Cuba, using pro-government rallies as photos of opposition rallies), and a total media boycott of any pro-government marches. There is a focus on “freedom” and an absence of any context, historical causes of problems, or any real solutions, while everything is blamed on the government the US seeks to change.

The #SOSCuba social media campaign began just a week before the marches. The first tweets came from an account in Spain (with over a thousand tweets in a few days and automated retweets), which was then supported by other bots and recently created accounts. The tweets coincided with an increase in COVID-19 cases in Cuba, though the figures (around 40 deaths a day) are well below even the US’s current death rate.

Any help or aid from the US always comes with conditions and ulterior motives. No matter how intricate his manipulations are, the bully isn’t actually going to help anyone.

Tamara Pearson is a brave writer, journalist, activist, and teacher living in Mexico. She is currently working as a freelance journalist, finishing her second novel, and working with Central American migrants and refugees, as well as other activism. She has been a journalist for 20 years, working as an editor for an international media agency headquartered in Ecuador, from Venezuela as an on the ground reporter and respected analyst, and prior to that, writing for Green Left Weekly from Australia. She has also written for a range of other media in English and Spanish from Bolivia, Pakistan, Zimbabwe, and more. She campaigned for refugee rights and against the war on Iraq in Australia, and was involved in community organising in Venezuela. She also worked at an alternative school there, promoting creativity and imagination as a tools of expression and empowerment. She maintains a bog at https://resistancewords.com/tamara-pearson/.[/su_panel] 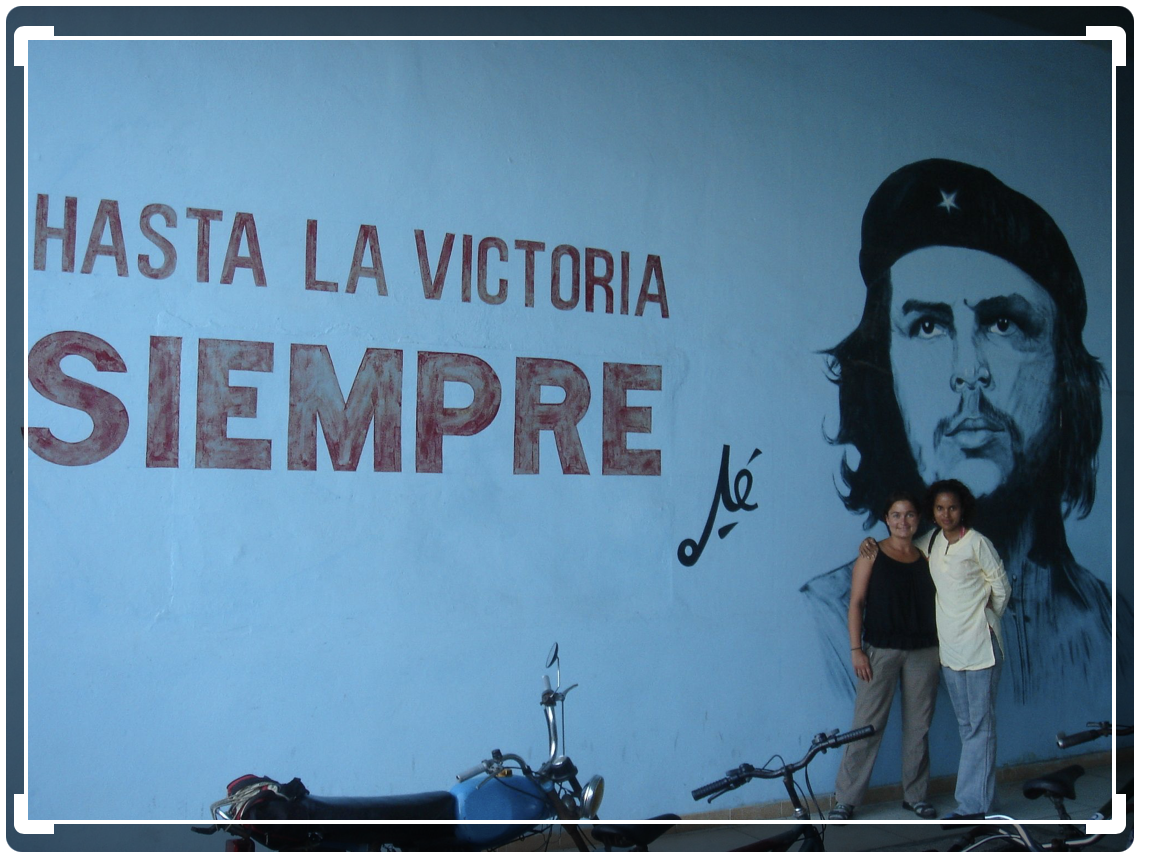 Introducing Inna Afinogenova, RT.com’s progressive news show host, who does it all in impeccable Spanish