Eye on the Media } By Patrice Greanville 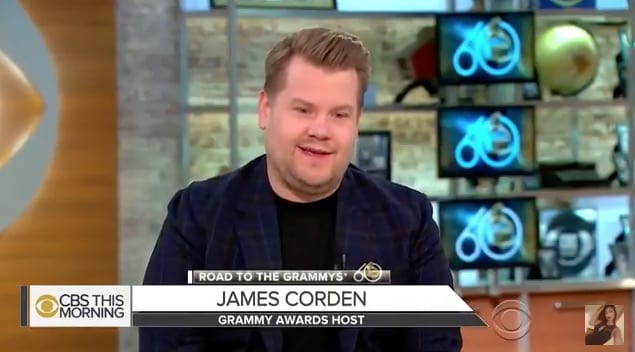 James Corden, another humble Briton who made good in America's gianormous entertainment industry is clearly grateful for his good luck. Unfortunately, like his compatriot John Oliver, the personable Corden, along with the rest of the current stable of establishment comedians (Bill Maher, Steven Colbert, etc.) is much too eager or clueless to show fealty to his true oligarchic masters at every turn, so I doubt he needed much prodding to involve himself in this deplorable exhibition:

Click on this link to watch video clip—>: CBS-ComedianAttacksPutin11.13.18

As an employe of CBS, Corden is a member of the liberal commentariat controlled and subservient to the Democrats and their corrupt duopolist warmongering agenda. No surprise then that he should dust off here another version of Russiagate, albeit in the guise of a mean-spirited frat joke.  Fired at a young, politically naive and highly conditioned audience, the gag hits the mark and the people laugh. Score one for the empire. The only good thing about this episode is that it is fittingly brief.

Now, let's do some dissection.

The truth is much different. Of course, Corden doesn't have a clue and neither do his writers or simply no none gives a damn. Insulting Russia and Putin is a game with no penalties in the Atlanticist mediasphere.  The facts are like this:

A more sober analysis of this event and what it really means can be found in the post below.

This post would be incomplete without adding the following excerpt from this superb critical overview of the role of modern comedians in America, chronicling and commenting on their self-castration, written by Steve Almond:

Among the hacks who staff our factories of conventional wisdom, evidence abounds that we are living in a golden age of political comedy. The New York Timesnominates Jon Stewart, beloved host of Comedy Central’s Daily Show, as the “most trusted man in America.” His protégé, Stephen Colbert, enjoys the sort of slavish media coverage reserved for philanthropic rock stars. Bill Maher does double duty as HBO’s resident provocateur and a regular on the cable news circuit. The Onion, once a satirical broadsheet published by starving college students, is now a mini-empire with its own news channel. Stewart and Colbert, in particular, have assumed the role of secular saints whose nightly shtick restores sanity to a world gone mad.

But their sanctification is not evidence of a world gone mad so much as an audience gone to lard morally, ignorant of the comic impulse’s more radical virtues. Over the past decade, political humor has proliferated not as a daring form of social commentary, but a reliable profit source. Our high-tech jesters serve as smirking adjuncts to the dysfunctional institutions of modern media and politics, from which all their routines derive. Their net effect is almost entirely therapeutic: they congratulate viewers for their fine habits of thought and feeling while remaining careful never to question the corrupt precepts of the status quo too vigorously.

Our lazy embrace of Stewart and Colbert is a testament to our own impoverished comic standards. We have come to accept coy mockery as genuine subversion and snarky mimesis as originality. It would be more accurate to describe our golden age of political comedy as the peak output of a lucrative corporate plantation whose chief export is a cheap and powerful opiate for progressive angst and rage.

APPENDIX: Corden Among friends, basking in his meteoric success

Corden, who hosts the Late Late Show on the Tiffany Network, discusses his recent career with the fawning gang at CBS This Morning.

Many Russians I speak with, esp. younger ones, say Putin is too much in with the Russian oligarchs. So even though he shows independence in foreign policy, his domestic one is still not what a lot of people approve of.

That may not be a bad thing.