Home ABOMINATIONS Hedges: “Our Only Hope Will Come Through Rebellion”

Hedges: “Our Only Hope Will Come Through Rebellion” 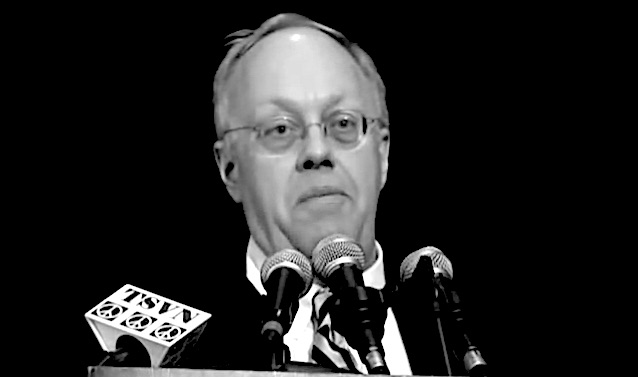 Chris Hedges speaks on 3/29/2014 at the "One Nation Under Surveillance" civil liberties conference at CCSU in CT. He's introduced by Mongi Dhaouadi, Executive Director of CAIR-CT. Hedges was one of he plaintiffs in a suit against the government "indefinite detention" policy. He's a former Middle East bureau chief of the New York Times He's written "Days of Destruction, Days of Revolt", "What Every Person Should Know About War", "War is a Force That Gives Us Meaning", and other books. The Struggle #531 He's a columnist at Truthdig.com

Chris Hedges: The American Empire Is Dead - How Corporations & Finance Have Ruined the U.S. (2009)

Following the invasion of Afghanistan in 2001, conservatives trumpeted the idea of American imperialism. About the book: https://www.amazon.com/gp/product/156... On October 15, the cover of William Kristol's Weekly Standard carried the headline, "The Case for American Empire." Rich Lowry, editor in chief of the National Review, called for "a kind of low-grade colonialism" to topple dangerous regimes beyond Afghanistan. The columnist Charles Krauthammer declared that, given complete U.S. domination "culturally, economically, technologically and militarily," people were "now coming out of the closet on the word 'empire.'" The New York Times Sunday magazine cover for January 5, 2003, read "American Empire: Get Used To It." In the book "Empire", Michael Hardt and Antonio Negri argued that "the decline of Empire has begun". Hardt says the Iraq War is a classically imperialist war, and is the last gasp of a doomed strategy. This new era still has colonizing power, but it has moved from national military forces based on an economy of physical goods to networked biopower based on an informational and affective economy.

The U.S. is central to the development and constitution of a new global regime of international power and sovereignty, termed Empire, but is decentralized and global, and not ruled by one sovereign state; "the United States does indeed occupy a privileged position in Empire, but this privilege derives not from its similarities to the old European imperialist powers, but from its differences." Hardt and Negri draw on the theories of Spinoza, Foucault, Deleuze, and Italian autonomist marxists. Geographer David Harvey says there has emerged a new type of imperialism due to geographical distinctions as well as uneven levels of development.[36] He says there has emerged three new global economic and politics blocs: the United States, the European Union, and Asia centered around China and Russia.[37][verification needed] He says there are tensions between the three major blocs over resources and economic power, citing the 2003 invasion of Iraq, whose goal was to prevent rivals from controlling oil.[38] Furthermore, Harvey argues there can arise conflict within the major blocs between capitalists and politicians due to their opposing economic interests.[39]

Politicians, on the other hand, live in geographically fixed locations and are, in the U.S. and Europe, accountable to the electorate. The 'new' imperialism, then, has led to an alignment of the interests of capitalists and politicians in order to prevent the rise and expansion of possible economic and political rivals from challenging America's dominance.[40] Classics professor and war historian Victor Davis Hanson dismisses the notion of an American empire altogether, mockingly comparing it to other empires: "We do not send out proconsuls to reside over client states, which in turn impose taxes on coerced subjects to pay for the legions. Instead, American bases are predicated on contractual obligations — costly to us and profitable to their hosts. We do not see any profits in Korea, but instead accept the risk of losing almost 40,000 of our youth to ensure that Kias can flood our shores and that shaggy students can protest outside our embassy in Seoul." Chalmers Johnson argues that America's version of the colony is the military base.[42]

Chip Pitts argues similarly that enduring U.S. bases in Iraq suggest a vision of "Iraq as a colony".[43] While territories such as Guam, the United States Virgin Islands, the Northern Mariana Islands, American Samoa, and Puerto Rico remain under U.S. control, the U.S. allowed many of its overseas territories or occupations to gain independence after World War II. Examples include the Philippines (1946), the Panama canal zone (1979), Palau (1981), the Federated States of Micronesia (1986), and the Marshall Islands (1986). Most of them still have U.S. bases within their territories. In the case of Okinawa, which came under U.S. administration after the battle of Okinawa during World War II, this happened despite local popular opinion.[44] As of 2003, the United States had bases in over 36 countries worldwide. http://en.wikipedia.org/wiki/American...

About the Author
Chris Hedges is a former foreign correspondent with the New York Times.