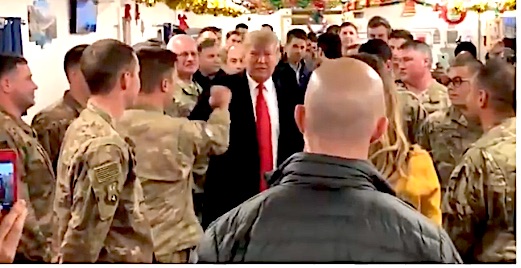 US President Donald Trump staged a surprise visit to an American airbase in western Iraq Wednesday in what appeared to be an attempt to both mollify intense criticism within the military-intelligence apparatus of his decision to pull troops out of Syria, and to reassert his commitment to continued US military operations in the Middle East.

The decision to withdraw the 2,000-plus US troops operating illegally inside Syria was announced on December 19, with the Pentagon confirming on Sunday that an “execute order” for the withdrawal had been issued. The White House has also unveiled plans to pull out half of the US troops currently deployed in Afghanistan.

The trip to Iraq marked the first time since he took office nearly two years ago that Trump has visited US military personnel in an active combat zone, something for which he was publicly criticized, including in a December 16 New York Times editorial titled, “Put Down the Golf Clubs, Visit the Troops.”

The crisis pervading his relationship with the military has sharpened considerably since the Syria withdrawal announcement, with reports of dissension among the senior ranks of the officer corps. Sections of the media and the Democratic Party have openly appealed to this discontent within the American high command, with some going so far as suggesting that they should act against Trump.

Spending barely three hours on the ground in Iraq, Trump delivered his “America First” message to the US soldiers, telling them, “The United States cannot continue to be the policeman of the world. It’s not fair when the burden is all on us, the United States…We are spread out all over the world. We are in countries most people haven’t even heard about. Frankly, it’s ridiculous.” He added, “We’re no longer the suckers, folks.”

Trump told the soldiers that “the generals” had asked for multiple six-month extensions to complete the destruction of the Islamic State of Iraq and Syria (ISIS) in Syria. “They said again recently, ‘Can we have more time?’ I said, ‘Nope. You can’t have any more time. You’ve had enough time. We’ve knocked them out. We’ve knocked them silly.’”

He added that Turkish President Recep Tayyip Erdogan had agreed to “knock out whatever’s left” of ISIS.

Interspersed with this populist and nationalist demagogy, however, was a clear message that the Trump administration has no intention of abandoning the US quest for hegemony over the oil-rich Middle East. He stressed that he had “no plans at all” to pull roughly 6,000 US troops out of Iraq.

En route to Iraq, Trump told reporters aboard Air Force One that the US may use Iraq as a platform for launching strikes and raids against Syria after the American troops are withdrawn.

While Trump had reportedly been scheduled to meet Iraqi Prime Minister Adel Abdul-Mahdi during his brief visit to Iraq, Abdul-Mahdi failed to appear, with his office citing “differences in points of view over arrangements.” In Baghdad, the head of one of the main blocs in the Iraqi parliament called for an emergency session of the legislature to discuss Trump’s unannounced visit, calling it a “blatant violation of Iraq’s sovereignty.”

“The American occupation of Iraq is over,” said the legislator, Sabah al-Saidi, adding that Trump could not be allowed to act “as if Iraq is a state of the United States.”

White House press secretary Sarah Sanders said that Trump also met with senior military officers in Iraq, claiming that, “The generals and President Trump came up with a powerful plan that will allow us to continue our path to total victory.”

What this path consists of in Syria is still less than clear, even as the threat emerges that the withdrawal of US troops—if it is ultimately completed—will lead only to a new and more dangerous stage in the protracted and bloody US-backed war for regime-change launched in 2011.

December 25 saw a sharp escalation of Israel’s intervention in Syria, with a series of airstrikes against targets surrounding Damascus. The attacks were the most intense since an Israeli attack on the coastal area of Latakia in September led to the downing of a Russian IL-20 aircraft. Moscow charged that the Israeli military used the airplane as a “cover” for its strikes, resulting in it being brought down by Syrian anti-aircraft missiles.

Moscow issued a protest over the latest Israeli strikes, charging that they directly threatened two civilian passenger planes and constituted a “gross violation of the sovereignty of Syria.”

The Russian Defense Ministry reported that the two planes were preparing to land at airports in Damascus and Beirut when Israel launched the attacks. One of them was forced to divert to the Russian airbase at Hmeimim, Syria.

“The provocative actions of the Israeli air force... directly threatened two airliners,” ministry spokesman Igor Konashenkov said in a statement. The presence of the two civilian aircraft impeded the Syrian government’s use of its air defense systems, the spokesman added.

Meanwhile, the area of northeastern Syria where the bulk of the US troops are deployed may soon become the flashpoint of renewed conflict. Trump has signaled that the Erdogan government in Turkey will assume the task of defeating the remnants of ISIS active in the area.

The US president tweeted, “President @RT_Erdogan of Turkey has very strongly informed me that he will eradicate whatever is left of ISIS in Syria... and he is a man who can do it plus, Turkey is right ‘next door.’ Our troops are coming home!”

The Erdogan government, however, has long made it clear that it sees not ISIS, but rather the Syrian Kurdish YPG militia as its main enemy. Until now, the YPG has served as Washington’s principal proxy force in Syria, operating in close collaboration with American special operations troops and backed by US air power. Ankara views the YPG as a Syrian branch of the Turkish Kurdish PKK, against which it has waged a decades-long counter-insurgency operation.

The Turkish media has broadcast images of trainloads of tanks and armored personnel carriers being rushed to the Turkish-Syrian border in preparation for an offensive, whose principal aim would be driving the YPG from the border. The immediate focus of this offensive is the northern Syrian city of Manbij, west of the Euphrates River, which has been controlled by the YPG operating together with US forces. Ankara had reached a deal with Washington for the withdrawal of the YPG from the city, which has yet to be implemented.

Turkish-backed Islamist militias of the “Free Syrian Army,” acting under Ankara’s orders, have reportedly been mobilized for an offensive on the city, which would be backed by Turkish artillery and armor.

There are reports, meanwhile, that the Syrian Kurdish leadership is in talks with both the government of President Bashar al-Assad, whose military forces have also advanced towards Manbij, and the Russian government.

The Turkish government has signaled that is prepared to intervene even if the YPG solidifies an agreement to cede control of the border area to the Syrian government.

“We will never hesitate in eliminating terrorists from our border even though the YPG agreed with the Syrian regime and if they control the area together,” Turkey’s Foreign Minister Mevlüt Çavuşoğlu told journalists in Ankara on December 25. “Our duty is to eliminate this threat on our national security by whomever this terrorist organization is being controlled.”

The Russian Foreign Ministry issued a statement Wednesday to the effect that it expects that the areas evacuated by US troops will be handed over to forces loyal to the Syrian government, in accordance with international law.

This, however, is by no means Washington’s intention. The aim of the US intervention from its outset was not so much to defeat ISIS, as to assert US control over a region of Syria that includes its main oil and gas fields, crucial to providing the resources for the rebuilding of the war-shattered country.

At the same time, there are reports that military officers from Saudi Arabia and the UAE have been sent into the region with the task of mobilizing Sunni Islamist militias to counter the Syrian government’s bid to reassert control. In this effort, the murderous regime-change operation in Syria may be brought full circle, with ISIS, the supposed target of US military operations, being rebranded as Syrian “rebels” deserving of US aid and support.

ABOUT THE AUTHOR
BILL VAN AUKEN is a senior editorial writer with wsws.org.