Actually there is no need to imagine. It's happening already.
—Opinion—
Alan Macleod, FAIR

[su_panel background="#f0f1f3" border="5px solid #cecdcd" radius="7"]Editor's Note: We are not persuaded that Alexandria Ocasio-Cortez is a real leftist, nor that she will not succumb totally to the siren call of the empire or be swallowed completely by the Democrats' legendary chicanery. Her political mettle and understanding of politics in the US remains a mystery at this point, and only time will tell, but, her much quoted program aside, her pronouncements on the occasion of John McCain's passing left us wondering if not downright annoyed. She did NOT have to praise that notorious war criminal. She did not need to join the chorus of sycophants burning incense at the foot of the imperial throne. And the fact that rightwingers and centrists see her as a leftist doesn't make it so. Hence, from our perspective, a lot of noise surrounding AOC on the right and among liberals is little more than poppycock at this point. The best we can say is that AOC —like Sanders—seems to talk the talk against the billionaire class, but will she walk the walk? We doubt it. She's clearly already embraced by the mainstream never-trumper identitarian crowd, and rubs elbows with a mob of upper middle class women who can almost guarantee a disconnect with the world that Ocasio promises to represent. That said, we'll keep an open mind until more definitive events proves us right..or wrong. And on this, we certainly would not mind to be wrong. Oh, by the way, we don't buy at all that liberal media noise that this Congress is the most diverse and progressive in history. That's just another identitarian piece of baloney.—PG [/su_panel]

"While the right’s opposition to her was predictable, the response of centrist and nominally liberal media, who might have been expected to celebrate the arrival of a strong voice on the left, has been decidedly muted." 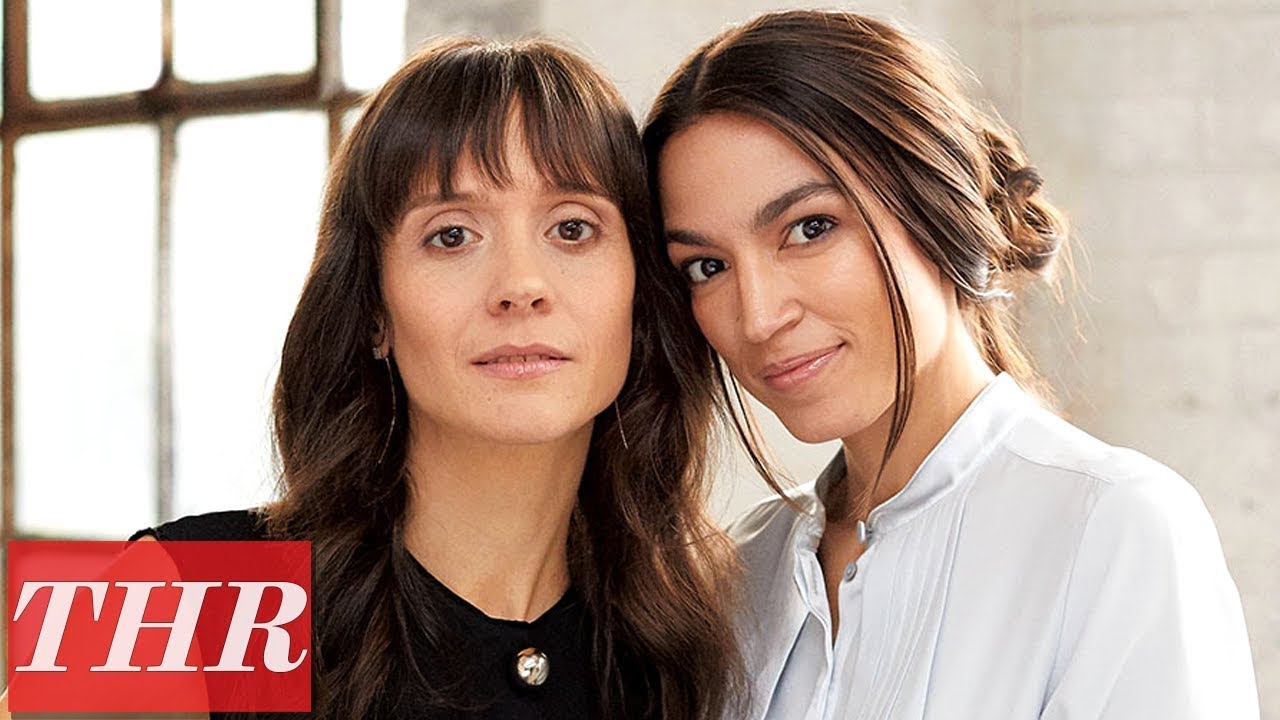 Few freshman members of Congress cause as much of a stir as Alexandria Ocasio-Cortez has. Articles about her are consistently the best-performing on right-wing news sites. The charismatic 29-year-old Bronx native has seriously ruffled the feathers of conservatives, unused to debating a Democrat with a genuinely progressive agenda. Her proposals include Medicare for All, a Green New Deal, free state college tuition, a 70 percent income tax on the wealthiest Americans and federal legalization of marijuana. 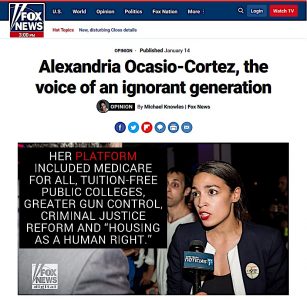 On the subject of the 70 per cent top marginal tax rate, Laura Ingraham (1/17/19) claimed, “Now, all of you [who] are doing better in the Trump economy, you should know this: They plan to take your money away and redistribute it to you know, wherever their pet causes are.” Dan Bongino (1/17/19) demanded that Ocasio-Cortez (AOC) donate 70 per cent of her salary to the government, claiming she “relies on a lot of economic ignorance to get you to believe what’s not true…her entire basis—the economic basis—for this is nonsense is based on garbage talking points.” The standard $174,000 congressional salary falls well short of her proposed top tax rate, reserved for those making over $10 million per year—a fact which raises the question of whom Ingraham is speaking for when she says “all of you” are doing better, and AOC will take away “your” money.

Other conservative outlets have been equally spooked by the self-identified socialist. The Washington Examiner (1/11/19) wrote that she “hates the rich” and thinks they “must be punished severely,” while the Daily Wire (1/16/19) quoted one individual who claims she speaks in the “vernacular of felons.” Breitbart (1/7/19) christened her a “Care Bear Commie” who planned to “impose watermelon tyranny on the US.” 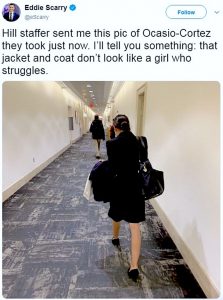 Conservatives have also led a number of bizarre, contradictory and self-defeating attacks on the young representative. In an attempt to prove she is not working-class, the Washington Examiner’s Eddie Scarry attacked her for her choice of jacket, claiming it “did not look like a girl who struggles,” while the Gateway Pundit (1/6/19) revealed an “exclusive” scoop that she went by the “elitist” name “Sandy” at college.

Meanwhile, Turning Points USA’s Candace Owens attacked her for being “so fiscally irresponsible” that she could not afford to rent a second apartment in Washington, DC, before her salary began. The average DC rent is over $2,000 per month.

There was also the now famous dancing video, where AOC and her friends in college recreated a scene from the 1985 movie Breakfast Club. Digging it up was meant to humiliate her but backfired spectacularly, as the public interpreted it as a fun clip making her look dynamic and cool.

These sorts of attacks on her background have flopped as they humanized Ocasio-Cortez and provided free publicity to her and her policies, which are broadly popular with Americans—even Republicans! Seventy-five per cent of the US public supports Medicare for all, including nearly two-thirds of Republicans. Sixty-one percent believe marijuana should be legalized (including 45 percent of Republican voters and 59 percent of those who “lean Republican”). Tuition-free public college is popular even among Tea Party supporters, while three-quarters of the population favor higher taxes on the wealthy. 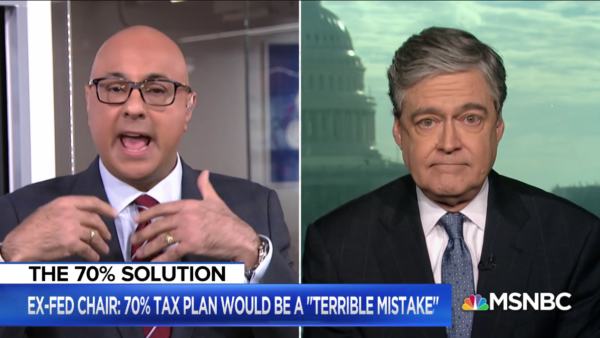 While the right’s opposition to her was predictable, the response of centrist and nominally liberal media, who might have been expected to celebrate the arrival of a strong voice on the left, has been decidedly muted. According to a count by Media Matters for America, Fox News spent more than two hours covering her first five days in Congress, in comparison to 96 minutes for  CNN and 52 minutes on MSNBC  (New York Times, 1/13/19). When they did cover her, her policies were rarely mentioned: Non-profit consumer advocacy group Public Citizen found that Fox News covered her Green New Deal proposal more than all other networks combined (with NBC, CBS and CNN not covering it at all), while the right-wing Daily Caller mentioned it more than any other digital news source. 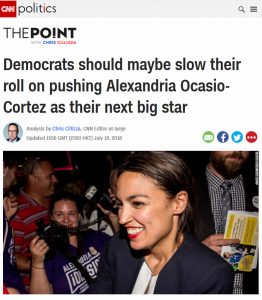 Chris Cilizza (CNN, 7/18/18): “Ocasio-Cortez gets herself into trouble…referring to Israelis who have settled in the West Bank as occupiers of Palestine.”

Centrist and center-left corporate media appear happy to cover how angry she is making the right (MSNBC, 1/5/19), her social media spats (Huffington Post, 11/27/28) or her role as part of a new cohort of women of color in Congress (Washington Post, 1/16/19). But when it comes to her politics, they often share the same misgivings as the conservatives. Newsweek (1/11/19) called her support for an increased top marginal tax rate “alarming,” while MSNBC (1/8/19) poured water on the plan, claiming it might simply drive the rich to leave the country.

CNN’s Chris Cillizza (7/18/18) declared that Democrats should be very cautious of supporting AOC, who “doesn’t know exactly what she is talking about,” that she and Trump are distinctly similar political figures with armies of brainwashed followers who “don’t even make an attempt to ascertain what the actual facts of any situation” (1/16/19), and that she represents a “very dangerous, slippery slope” towards a form of leftist Trumpism (1/7/19).

On her support for Palestinian rights, the New York Times’ Ross Douthat (1/16/19) strongly insinuated she was antisemitic, noting that the Democratic Party must find a way of “quarantining the kind of hatred” of the “left-wing, populist, anti-establishment” movement “reshaped by Ocasio-Cortezan energy” that is “influenced by paranoias and bigotries that bubble up on the far left.”

The centrist media response mirrors that of the Democratic establishment, who Politico (1/11/19) reports are “most annoyed” by AOC’s attempts to immediately influence policy, with House Democratic sources claiming she has “totally pissed off everyone” and that her use of social media is Trumpian.

It is impressive how much Ocasio-Cortez has upset the right-wing in such a short time. But when it comes to actual policy issues and not just Twitter spats, it appears the centrist establishment is as uncomfortable with a progressive agenda as the most frothing-at-the-mouth conservatives.

Alan MacLeod  @AlanRMacLeod is a member of the Glasgow University Media Group. His latest book, Bad News From Venezuela: 20 Years of Fake News and Misreporting, was published by Routledge in April.

America has its gunsights on Venezuela