Home ABOMINATIONS ‘Are we meddling?’ Max Blumenthal confronts lawmakers on what America’s doing in Venezuela (VIDEO)

‘Are we meddling?’ Max Blumenthal confronts lawmakers on what America’s doing in Venezuela (VIDEO)

HELP ENLIGHTEN YOUR FELLOWS. BE SURE TO PASS THIS ON. SURVIVAL DEPENDS ON IT.
A REPORTAGE BY MAX BLUMENTHAL / THE GRAY ZONE PROJECT 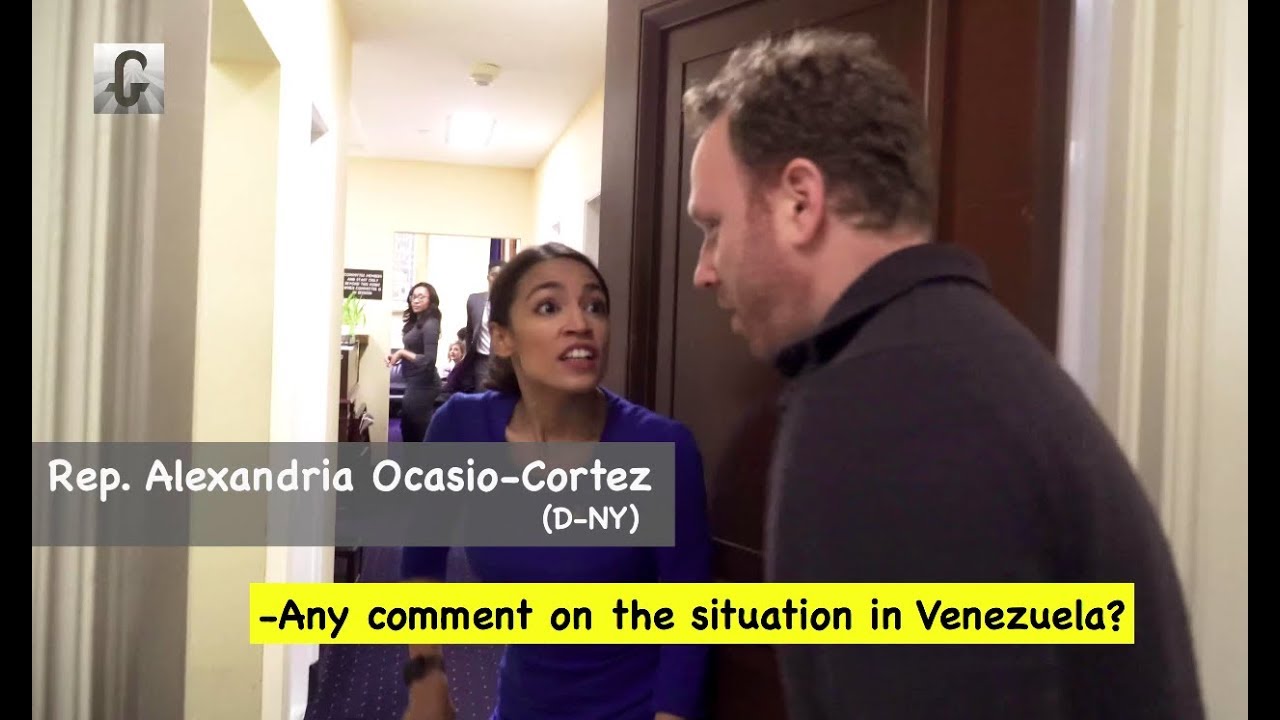 You can also see this on "GreanvilleScope". Just click here.


Heading to Capitol Hill, Max Blumenthal performs a signal public service by asking a simple question of "our representatives" about Venezuela. The faces of discomfort and fear (just watch "progressive" Ocasio-Cortez panicking) are priceless. And some, like Rosa DiLauro (D-CT), are cagey and arrogant in their shameless replies. But, confronted with their complicity in a huge crime, they all seem too busy, just too busy, to stop and reply with a straight answer. Their aides, trained to "save" their bosses from embarrassing spots, come to the rescue. The bottom line is undeniable: The US Congress is a den of colossal hypocrisy, boldfaced criminality and ignorance, all of it laid bare by a brave and honest journalist. These are the figureheads for the ruling class who never tire of proclaiming we live in the best democracy on the planet. And, as you can see from Ocasio Cortez' pathetic reaction, the much publicized "younger generation" of legislators will change exactly nothing. 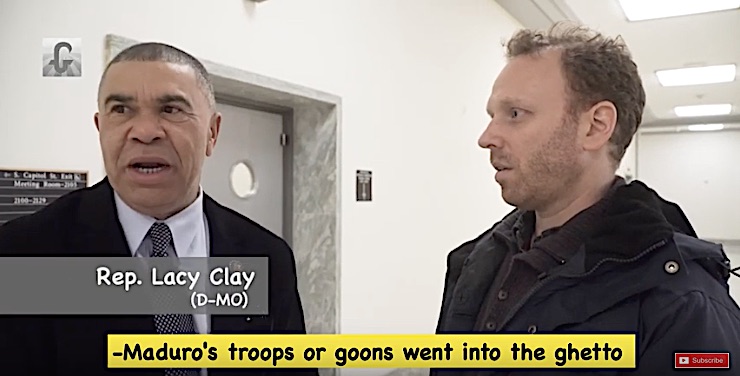 Rep. Clay (D-MO) vacillates a bit but overall he's the most decent of all the people interviewed. It remains unclear what he will do when it comes to any votes. He appears not terribly inclined to make waves.

US members of Congress freeze, fumble and deliver bewildering answers to award-winning journalist Max Blumenthal as he asks Capitol Hill politicians what they think of the US’ open support for Venezuela’s opposition. 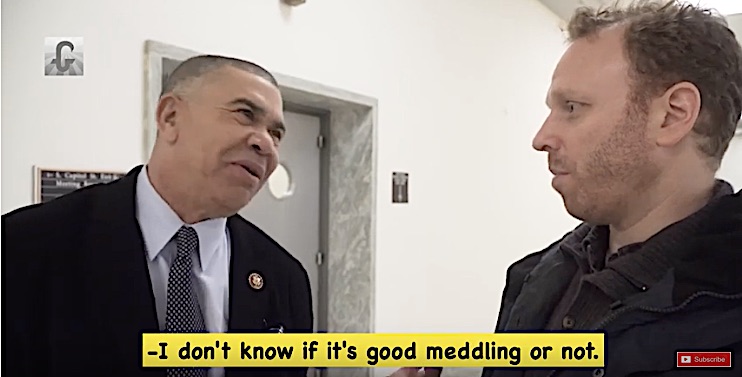 Many members of the US Congress are greatly concerned by supposed ‘Russian meddling’ in American affairs. But what do they think about Washington openly getting behind the opposition in Venezuela? In a video, published on his website, the Grayzone Project, Blumenthal asked lawmakers just that.

The politicians were visibly caught off guard by pretty simple and straightforward questions. Several lawmakers couldn’t provide a definitive answer to whether the US public support for opposition leader Juan Guaido could be considered ‘meddling’ in a foreign nation’s affairs.

“Haven’t thought about that,” a baffled lawmaker was heard saying when asked how he would react if Russia recognized House Speaker Nancy Pelosi as president of the US. 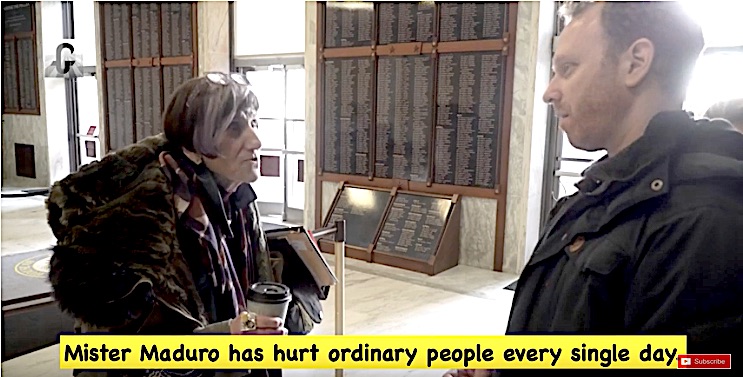 Washington did something similar to that last week, when President Donald Trump recognized the speaker of Venezuela’s opposition-controlled parliament, Guaido, as the legitimate leader of the country.

Some, like Congresswoman Alexandria Ocasio-Cortez outright refused to answer questions on Venezuela, saying she is “working on a response.” Others denied that the wholesale US support for Guaido against President Nicolas Maduro constitutes ‘meddling,’ albeit failing to coherently explain why.

“I think we’re just supporting the people and supporting what they are deciding needs to happen, and so I think it’s good of us since we are the bastion of freedom,” Vicky Hartzler, a Republican from Missouri, stated.

Her Democratic colleague, Rosa DeLauro of Connecticut, was passionate about protecting Robert Mueller’s probe into the so-called ‘Trump-Russia collusion.’ When asked about meddling in Venezuela, she mumbled: “I don’t know. There’s been a lot against Maduro, who’s awful.”

Only Missouri Democrat Lacy Clay said that the US policy in South America and the Caribbean is “something we should not be proud of.” He opposed the “embargo” on Caracas because its people “will suffer more.” However, even he wasn’t sure whether it was “good meddling or not,” saying that Venezuela wasn’t his “issue.” 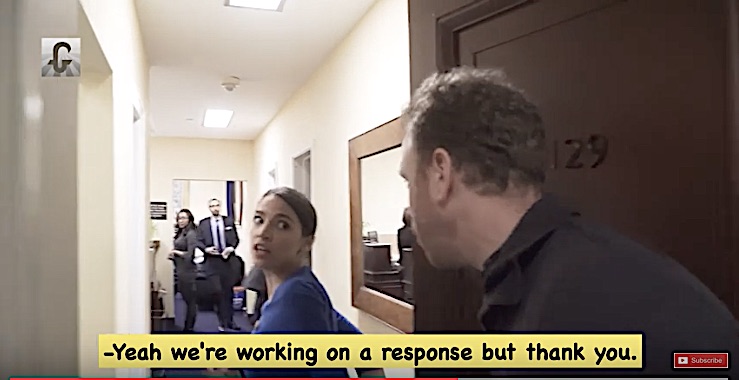 Alongside the US, Juan Guaido was recognized as the interim president of Venezuela by a majority of South American countries, including neighboring Colombia and Brazil. France, Spain and Germany vowed to follow suit unless Nicolas Maduro calls a snap election. Their ultimatum was firmly rejected by Maduro. States including Russia, China, Iran and Turkey continue to recognize Maduro as the democratically elected leader of Venezuela.

Code Pink co-founder Medea Benjamin recently disrupted Secretary of State Pompeo’s speech on Venezuela last week at the Organization for American States, which received wide support from Venezuelans and President Maduro. Benjamin joins In Question to discuss the US role in Venezuela, if ousting Maduro would be good for the country and the history of US interference in Latin America.

Max Blumenthal is an award-winning journalist and the author of several books, including best-selling Republican Gomorrah, Goliath, The Fifty One Day War, and The Management of Savagery. He has produced print articles for an array of publications, many video reports, and several documentaries, including Killing Gaza. Blumenthal founded The Grayzone in 2015 to shine a journalistic light on America’s state of perpetual war and its dangerous domestic repercussions.
http://grayzoneproject.com