[dropcap]W[/dropcap]e have often pointed in these pages the absolutely repulsive and underhanded role played by the empire's court jesters, notably Stephen Colbert (CBS), Bill Maher (HBO), John Oliver (HBO), under review here, plus a fairly crowded stable of lesser figures, all of whom, sitting on their lavishly paid corporate-furnished perches, expertly combine cheap laughs with imperial propaganda, a fact which routinely translates into malicious defamation of any person or nation defying Washington's diktats or straying from rapacious capitalism.  It's also noteworthy that most of these comedians are mainstream liberals, usually vocally supporting Democrat party honchos. (1)(2)

Not surprising, then, that in the current stampede to stomp on Venezuela's duly elected president, John Oliver, whose brand of humour is frequently Nouveau Colonialiste because of his often subtly racist and outright snide jokes on Third World leaders Washington and London don't approve of  (he used his poisoned stiletto on Ecuador's Rafael Correa, among others, for example) should be found casting his stones on the nearly lynched Maduro. Indeed, if nothing else, Oliver, demonstrates extraordinary dedication to this defamation project. A cursory review of his show's targets easily yields a crop of attacks under the usual guise of "common sense information", going back several years, sprinkled, of course, with the expected sophomoric quips. The comic has been so industrious in this regard, that his toxic effluvia has forced some genuine leftist observers to file some rebuttals and dissections, laying bare the deceptions, the malicious artifice behind the art.  Below a sampler of the evidence on hand: 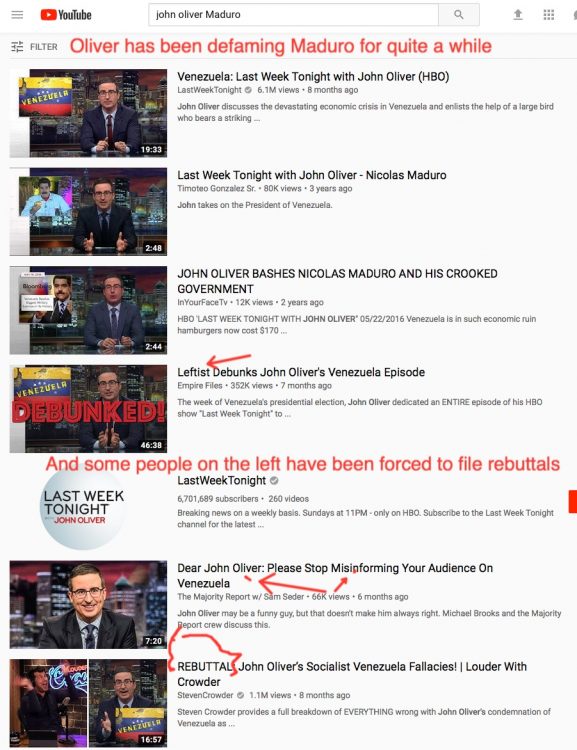 The situation was and remains so foul and out of control that finally a highly respected and talented (and I should add qualified) leftist critic, Mike Prysner, the Empire Files producer, entered the ring to put this insalubrious buffoon in his place.  Too bad that Oliver's audience stands little chance of seeing this critique, nor of understanding the truths in it. After all, the brainwashed mind, which grounds itself in a thick substratum of arrogant lies, is conditioned to repel with hostility any attempt at dissolving its imprisoning mental fog.

The week of Venezuela's presidential election, John Oliver dedicated an ENTIRE episode of his HBO show "Last Week Tonight" to the country—full of distortions and highly misleading to progressive-minded people. Responding to Oliver's major points, Empire Files producer Mike Prysner walks us through the most glaring omissions and misrepresentations. This video response is an essential guide for progressives to understand the reality in Venezuela, the most common myths used to discredit the Chavez movement, and the role of the US government. [[ Prysner is an Iraq war veteran and journalist. He spent a month in Venezuela during the height of the protest movement in 2017, covering the riots and economic crisis. He has been a Venezuela solidarity activist since 2006.

[[Watch the many documentaries and interviews he produced from Venezuela at TheEmpireFiles.tv ]]

And here's another eloquent rebuttal:

Published on Jul 5, 2018
John Oliver may be a funny guy, but that doesn't make him always right. Michael Brooks and the Majority Report crew discuss this.

[dropcap]B[/dropcap]ut of course, as we said earlier, Oliver is not the only villain in town when it comes to committing informational murder on Venezuela. Practically the entire US media and its servile media pods around the world have been in on this disinformation campaign ever since Hugo Chavez—speaking the language of socialism—emerged from obscurity in 1998—yea, they have been lying nonstop for more than 20 years. And the character assassination has worked: a substantial number of Americans believe now Venezuela is ruled by crazy and inept communist dictators bringing only misery to the masses, as socialism supposedly always does. True journalism, however, does survive, as does unbreakable decency, and we find it in people like Abby Martin, Jimmy Dore, Chris Hedges, Mike Prysner, John Pilger, Jim Kavanagh, Dave Pear, Jeff Brown, John Rachel, Eva Bartlett, Vanessa Beeley, Lee Camp, Ben Norton, Jeff Brown, Paul Jay, Caitlin Johnstone, and a host of other equally wonderful people for whom telling the truth about humanity's current predicament is a sacred duty. Below, in a prescient episode, Jimmy Dore teams up with Abby Martin to sketch out the true political geography of the Venezuelan situation.  This is the kind of journalism that can save the world.

What You’re Not Being Told About Venezuela Crisis. w/Abby Martin

Oliver has been defaming Venezuela for many years.
Exhibit 1:

Exhibit 2: John takes on the president of Venezuela
Published on May 4, 2015, more than five years ago.

[/bg_collapse]
ABOUT THE AUTHOR
Patrice Greanville is editor in chief of The Greanville Post.

‘Are we meddling?’ Max Blumenthal confronts lawmakers on what America’s doing in Venezuela (VIDEO)