Home ABOMINATIONS Max Blumenthal on Venezuela & Dark Ops / Follow Up to his must-see video on Capitol politicians squirming under his simple questions.

Max Blumenthal on Venezuela & Dark Ops / Follow Up to his must-see video on Capitol politicians squirming under his simple questions.

The Zero Hour with RJ Eskow

Find out more at https://grayzoneproject.com/
One of the painfully few people that Max Blumenthal found on Capitol Hill who was 100% against larcenous US meddling in Venezuela, was TULSI GABBARD.

Media hypocrisy: the presstitutes crocodile tears
Meanwhile...revolting media hypocrisy. None of these "reports" mention the huge pink elephant in the room, that it is chiefly arbitrary and wholly illegal punitive US sanctions, designed precisely to make the economy scream, that have brought Venezuela to this horrid pass. Note (from the dateline of these clips) that this is nothing new. The US has been at it for almost 20 years. 20 FUCKING YEARS. With complete domestic and international impunity: GW Bush, Obama, and now Trump have unleashed a total propaganda, economic, diplomatic and soon military war on Venezuela.Watch the presstitutes feign empathy with the suffering Venezuelans. (Note how CNN, along with other big US "news" networks, relies on cheaper labor in the form of British reporters: they work for less and are less brattish than their US counterparts.CNN Jake Tapper

As the listing below shows, the US has been trying to destabilise Venezuela for a long time. Ever since Pres. Chavez came to power in 1998. This is just a small sample of reports from one source, CNN, but the dates tell the story: the suffering of the Venezuelan people has been going on for quite a while. All the reports of course rarely mention the US meddling, as that might suggest the Venezuelan government is not so criminally inept as the corporate media want you to believe. 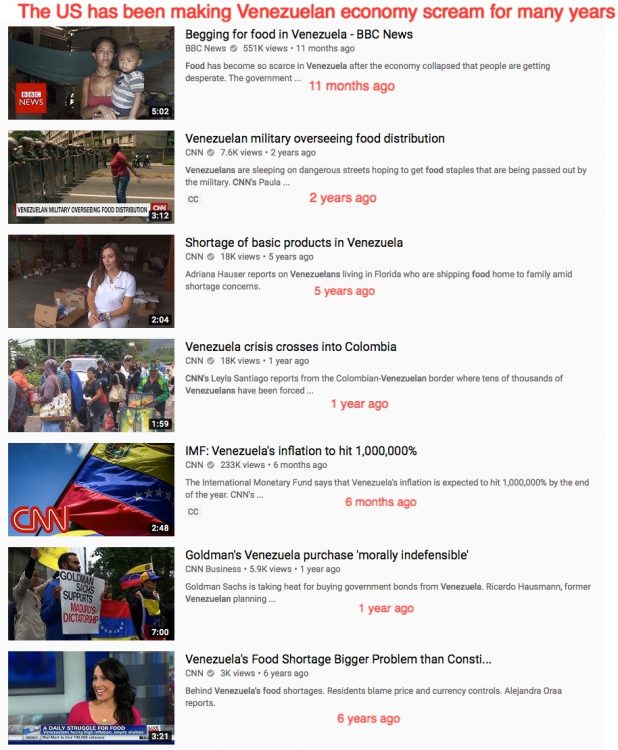 Lee Camp: The TRUTH About Juan Guaidó in Venezuela