There is little doubt where 'western' media stand with regards to the U.S. led coup-attempt (vid) in Venezuela. But their view does not reflect the overwhelming international recognition the Venezuelan government under President Nicolás Maduro continues to have.

The Rothschild family's house organ, the Economist, changed the background of its Twitter account to a picture of the Random Dude™, Juan Guaidó, who the U.S. regime changers created to run the country. 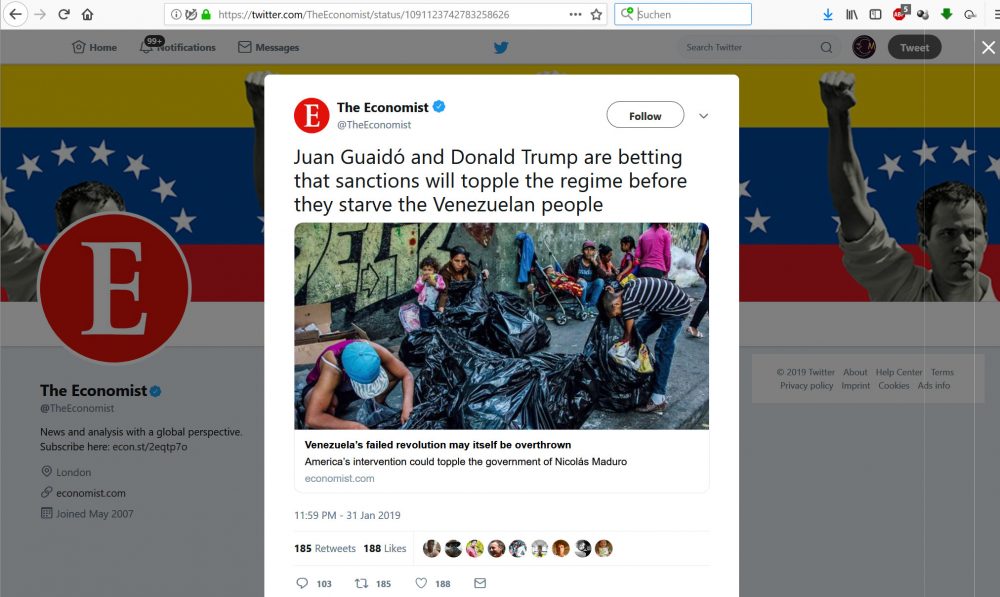 The Economist @TheEconomist - 23:59 utc- 31 Jan 2019Juan Guaidó and Donald Trump are betting that sanctions will topple the regime before they starve the Venezuelan people econ.st/2DMOeEk

It is quite obvious that Trump’s Illegal Regime Change Operation Will Kill More Venezuelans. The Economist supports that starvation strategy.

The supposedly neutral news agencies are no better than the arch-neoliberalEconomist. The Reuters' Latin America office also changed its header picture to Random Dude. It reverted that after being called out.

Agence France-Press stated at 11:10 utc yesterday that "tens of thousands" would join a rally.

AFP news agency @AFP - 11:10 utc - 2 Feb 2019Tens of thousands of protesters are set to pour onto the streets of Venezuela's capital #Caracas Saturday to back opposition leader Juan Guaido's calls for early elections as international pressure increased on President #Maduro to step down http://u.afp.com/Jouu

That was at 7:10am local time in Caracas several hours before the rally took place. Such "predictive reporting" is now supposed to be "news". A bit later AFP posted a video:

AFP news agency @AFP - 15:50 utc - 2 Feb 2019">VIDEO: Thousands of opposition protesters pour onto the streets of Caracas to back Venezuela's opposition leader Juan #Guaido who is calling for early elections, as international pressure increases on President Nicolas #Maduro to step down

That was at 11:50am local time. The attached video did not show "thousands" but some 200 people mingling around.

Hours later a pro Random Dude rally took indeed place. From what I gathered it was attended by some 50-80 thousand people. (Others calculate less.) Flags of the United States and Israel were raised: 1, 2, 3, 4. 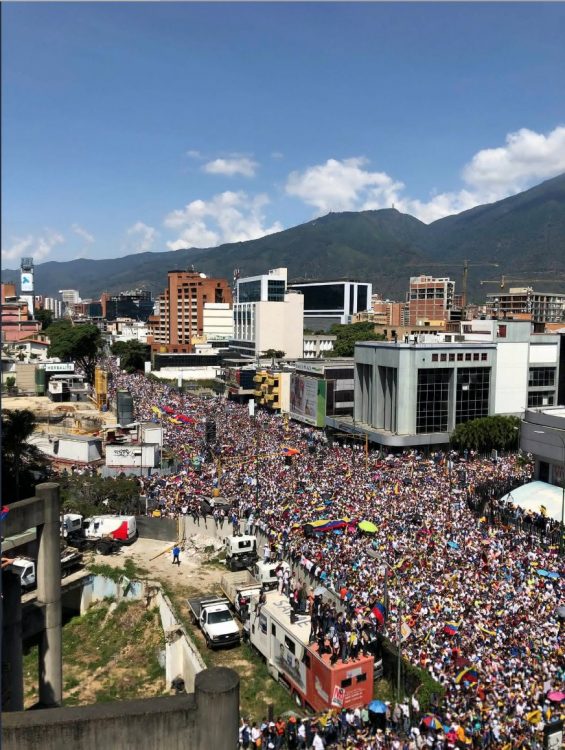 Pro Chavismo rallies took place in several Venezuelan cities. These were not billed as anti-coup demonstrations but as commemorations of the 20 year anniversary of socialist policies. That might have effected their size. The rally in Caracas was attended by some 20-30 thousand people: 1, 2, 3.

The New York Times report on yesterday's events in Venezuela mentions the pro-government rallies only in paragraph 33 to 35 of its 37 paragraph long story.The shorter Washington Post report puts them in paragraph 15 and 16 with lines that are consciously constructed to make the rallies seem  tiny and Maduro look like a liar:

The pro-government demonstration in central Caracas had drawn about 300 people by 10:30 a.m. Dressed in red and carrying ruling party flags, they were marching toward the presidential palace.“Our people, once again, overflowing this avenue,” Maduro said, addressing his supporters. “Those who accuse us of being a dictatorship must know that since the foundation of the revolution, we have become a profoundly free and democratic people. Venezuela will never have a dictatorship.”

During his speech Maduro called for new elections to the Venezuelan parliament, the National Assembly. The parliament, currently not functional as the Supreme Court blocked its power for not following its judgments, is controlled by the opposition.

The U.S. is now trying some gambit over 'aid' it wants to deliver to the opposition in Venezuela. National Security Advisor John Bolton originally planned to deliver it through the Red Cross:

Secretary of State Mike Pompeo said last Saturday that we would be prepared to donate an initial $20 million dollars to the Red Cross, to the UN High Commission for Refugees. So we’re looking at all this very carefully.

But the Red Cross rejected such politicization of its traditionally neutral role:

Alexandra Boivin, ICRC delegation head for the United States and Canada, said the ICRC had told U.S. officials that whatever plans “they have to help the people of Venezuela, it has to be shielded from this political conversation.”
...
ICRC director of global operations Dominik Stillhart said the committee would only take part in such coordinated efforts if they are executed “with the agreement of the authorities, whoever the authorities are.”

A new scheme was thought out:

[Random Dude] said that in the coming days, the opposition would try to move humanitarian aid into the country by land and sea along three border points, including the Colombian city of Cucuta. He described the move as a “test” for Venezuela’s armed forces, which will have to choose if they allow the much needed aid to pass, or if they instead obey the orders of Maduro’s government.

The 'aid' must be thoroughly checked before it enters the country and the government should take care to distribute it evenly. During the war on Syria so called 'humanitarian aid' from Turkey, Israel and Jordan was used as cover for large scale weapon and munition transports which mostly ended up in the hands of Jihadists.

So far the Venezuelan military proved to be solidly in the camp of the government. Two officers, a military attache in the Venezuelan embassy in Washington DC and an air force general who fled to Colombia, are the only known defectors. Both had office jobs and did not command any operational units. This analysis provides that without military support the coup attempt is unlikely to be successful. As the Venezuelan author concludes:

For now, Venezuela faces a government weak in the economic and social arenas, but with strong judicial and military institutions. This will be the case unless —weakened by international pressure— Chavismo’s emerging fissures gather momentum and are able to undermine the government’s stability. However, as long as the U.S. government’s strategy operates on the basis of threats, Chavismo will have a reason to remain strong and unified.

The U.S. failed to get sufficient international support for its recognition of Random Dude as president of Venezuela. So far only Canada, Israel and 14 Latin American states took its side. A few European nations are slowly following.

But no international organization supports the position. Mexico and Uruguay, both members of the Lima group - a 'coalition of the willing' created by Canada, refused to recognize Guaido and called instead for new elections. Secretary of State Pompeo's attempt to get the Organization of American States (OAS) on his side failed:

The efforts were unsuccessful, garnering only 16 favourable votes out of the 34 countries, with US allies Guyana, Santa Lucia, and Jamaica abstaining.

The United Nations Secretary General Gutierres announced that the UN only recognizes the Maduro government. Italy blocked a European Union recognition of the Random Dude while the EU parliament, which has no power in foreign policies, followed the U.S. position. The EU now only demands new elections to be held sometime in the future. The African Union supports Maduro and spoke out against the coup attempt. Russia, China, NATO member Turkey, South Africa, Iran and Syria spoke in support of the Maduro government.

The media are misleading on the international support. On February 1 Reuters  headlined EU states move to recognize Venezuela's Guaido: diplomats. But the piece itself contradicts the headline. It found only four out of twenty eight EU states, Britain, France, Germany and Spain, that were expected to announce support. On February 4 the Washington Post headlined European nations recognize Guaido as Venezuelan leader but the report says that only Spain, France and Sweden took that step. [Editor's Note: Watch how shamelessly awful Sweden has become!] The Guardian also headlines: EU countries recognise Juan Guaidó as interim Venezuelan leader but names only five countries, Spain, France, the UK, Sweden and Denmark, one of which is poised to leave the EU.

In total the 'international support' the U.S. led coup attempt has gained so far is quite thin. It has no international legitimacy. Unfortunately only few if any of the 'western' media will point that out.

About the Author
"b" is Moon of Alabama's founding editor's nom de guerre. "b" is believed to be a veteran German journalist.

Why All Anti-Interventionists Will Necessarily Be Smeared As Russian Assets