Home ABOMINATIONS Paris steps up calls for coup in Venezuela

[dropcap]A[/dropcap]fter the major European powers recognized far-right politician Juan Guaidó as Venezuela’s “interim president,” Paris is stepping up threats and calls for regime change in Caracas. Reprising the methods of the Trump administration, which recognized Guaidó as president via Twitter, Paris and the other European powers are resorting to utter lawlessness, trampling Venezuelan sovereignty underfoot in a bid to plunder the strategic and oil-rich country. 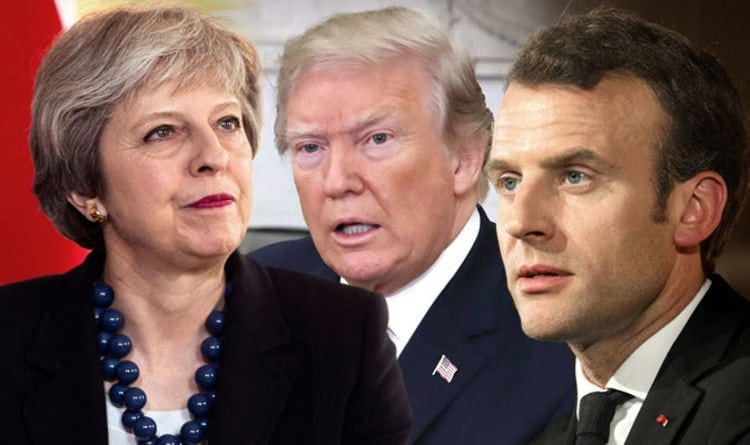 Trump, May, and Macron—all three, plus other leaders in Spain, Germany, etc., fully qualify as criminals under Nuremberg and UNO statutes binding even the US to its rules, as per its Constitution. Macron, though besieged by his own people, has been shameless in his coup support. The Gilets Jaunes should take note.

French diplomats speaking off the record are feeding a stream of threats to the media, making clear that Paris will support a bloody intervention to topple President Nicolas Maduro. “Indifference would be even worse than intervention,” one diplomat said. Another told Le Monde the European powers had given Maduro an eight-day ultimatum to step down “to give Nicolas Maduro a little time to decide whether he wants to be Gorbachev or Bashar al-Assad.”

As the Trump administration threatens to blockade Venezuela and even invade the country, a threat echoed by Brazil’s far-right government, the implications of this threat are unmistakable. Either Maduro hands over Venezuela to the imperialist powers, or they may target it for a proxy war as in Syria, where hundreds of thousands died.

As they face growing repression of “yellow vest” protests, it is critical for workers in France and across Europe to oppose the imperialist threats against Venezuela.

As it faces threats of blockade, a disintegration of its currency as inflation surges, and a collapse of broad sections of the working population into poverty, Venezuela is being targeted by a relentless campaign of provocations in the European media.

Speaking to France Inter, Foreign Minister Jean-Yves Le Drian stated that Maduro’s ouster and his replacement by Guaidó was necessary: “Only free elections will allow the state to have a renewed authority and democracy.” He said, “We have noted President Maduro’s refusal to hold presidential elections that would work to simplify, clarify and make more serene the situation in Venezuela, and we believe Mr Guaidó has the capacity and the legitimacy to organize such elections.”

The claim that Guaidó has the legitimacy to decide the fate of Venezuela is absurd. A 35-year-old right-wing operative who was politically unknown prior to the coup attempt, Guaidó has been backed and funded by the US NGOs and the National Endowment for Democracy (NED), a long-standing front for CIA interventions in Latin America and around the world.

The purpose of the coup attempt is not to restore democracy, but to plunder the country. Top Trump administration officials have not hidden the strategic aims of installing a US-backed operative as head of a state that currently has close ties, both military and economic, to Russia and China. Last month, US National Security Advisor John Bolton told Fox News: “It will make a big difference to the United States economically if we could have American oil companies really invest in and produce the oil capabilities in Venezuela.”

The European ruling elite is deploying its bottomless hypocrisy as it portrays its intervention to back Guaidó, following that of Trump, as a disinterested democratic act. Asked on France Inter whether his position constituted an intervention in Venezuelan politics, Le Drian shamelessly denied it, declaring it to be a “call” or a response to “a request for help.”

In the meantime, European papers are downplaying or furiously denying the obvious: that they are trampling Venezuelan sovereignty underfoot, backing a right-wing coup launched by Trump. “The capitals that are the most implicated, including Paris, appear to be acting in line with Washington,” France’s Le Monde wrote, while Spain’s El Pais proclaimed: “The announcement made by Spain and other European countries is not a break with legality, but precisely an attempt to task the interim president with restoring it...”

Both papers insisted that their policy is a better way to install Guaidó in power and tried to distance themselves from Trump, claiming that they are in fact fighting his Latin American policy by opposing calls for a US invasion of Venezuela.

In its editorial “Support for Guaidó,” El Pais wrote: “US President Donald Trump’s aggressive rhetoric helps no one who wants a return to democracy in Venezuela. On the contrary, it strengthens Nicolas Maduro and his followers. Not only do constant calls for a possible military intervention by Washington cause understandable international concern, but the European Union and Latin America must clearly confront them. This is a red line that should in no manner be crossed. The 20th century was the end of US interventions in Latin America.”

As for Le Monde’s editorial, “Venezuela: supporting not intervening,” it reiterated calls for a coup: “The crucial factor is that the Venezuelan army has not for now changed camp. Mr Guaidó must continue his efforts to manage to convince them.”

It pointed, however to the danger of a US conflict with Russia and China, as well as the politically explosive situation in Latin America, after the recent elections of Jair Bolsonaro’s fascistic regime in Brazil and Andres Manuel Lopez Obrador’s populist government in Mexico. It wrote, “In this volatile situation, one thing is certain: US military intervention, which President Trump is threatening, would be a grave error.”

Such attempts to present European imperialism as pursuing a fundamentally different, more responsible and less aggressive policy than Trump are false to the core—dictated principally by the concern about opposition in the European and international working class to their policies.

Behind the scenes, powerful inter-imperialist rivalries are no doubt exploding between Washington and the EU. The scramble to divide up profits and oil from Latin America is especially bitter as Trump threatens the EU with trade war measures like tariffs on German car exports, and with Europe’s role as the top investor in Latin America in the balance. The European powers are no doubt afraid of the consequences, both economic and political, of a disastrous US occupation of Venezuela.

Presenting the European powers as opposing wars and coups is, however, a political lie. The 21st century has seen a drastic upsurge in US and European imperialist bloodshed, with wars in the Middle East, Africa and also the Western hemisphere, where US-led military interventions took place from Haiti to Colombia. However bitter their conflicts with Washington, the European powers themselves deployed troops to Afghanistan, Iraq, Mali, Syria, Libya and beyond. Their support for a coup in Venezuela only confirms that they have descended into utter lawlessness.

ABOUT THE AUTHOR
Alex Lantier is European correspondent for wsws.org, a leading Marxian publication.