June 30, 2022
Be sure to circulate this article among friends, workmates and kin. 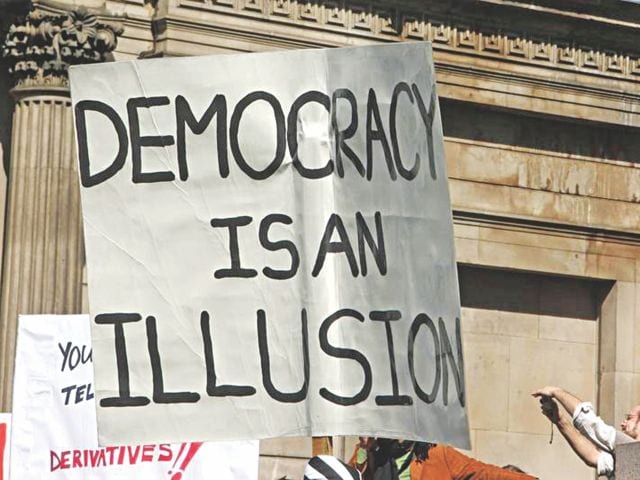 Well said, but it should read, "Capitalist Democracy is an Illusion."

In America, a woman’s right to an abortion of a pre-conscious (earlier than 20 weeks) fetus is no longer recognized by its federal Government, though, by a 59% to 41% margin (and 67% to 33% among American women, who are the people directly affected), the American people want it to be. That’s one example of America’s dictatorship (minority-rule). (This statement about it isn’t a commentary on the ethics of abortion, but on the polling on abortion, in America.) But there are many other examples of America’s being now a minority-rule nation.

For example: in February of 2008, a U.S. Gallup poll had asked Americans "Would you like to see gun laws in this country made more strict, less strict, or remain as they are?” and 49% said “More Strict,” 11% said “Less Strict,” and 38% said “Remain as Are.” But, then, the U.S. Supreme Court, in June 2008, reversed that Court’s prior rulings, ever since 1939, and they made America’s gun laws far less strict than the gun-laws ever had been before; and, thus, the 5 ruling judges in this 2008 decision imposed upon the nation what were the policy-preferences of actually a mere 11% of Americans.

Then, in 2014, there was finally the first scientific answer to the question of whether America is a democracy or instead a dictatorship, when the first-ever comprehensive political-science study that was ever published on whether the U.S. Government reflects the policy-preferences of the American public or instead of only the very richest Americans found that, “the preferences of the average American appear to have only a minuscule, near-zero, statistically non-significant impact upon public policy”; and, so, “Clearly, when one holds constant net interest-group alignments and the preferences of affluent Americans, it makes very little difference what the general public thinks.”

In other words: America, which nominally is a (limited) democracy, is actually an aristocracy, NOT a democracy at all. Each one of the ways in which America's laws and their enforcement reflect what the country’s billionaires want, but NOT what the country’s public want, those proposed pieces of legislation have become laws just as much, as happens when the billionaires and the public have the same policy-references regarding the given policy-matter, as when they don't. This means that the aristocracy always get policies that are acceptable to them, but the public often do not. The result is conservative government regardless of what the public wants. No aristocrat is progressive (for majority-rule — “democracy”); all are instead either overtly conservative (for “fascism,” another term for which is “corporationism”), or else noblesse oblige or hypocritically conservative (“liberals”), people who are pretending to care about the public as being something more than merely their markets (consumers they sell to) or else their workers (their employees or other agents, such as lobbyists). When the public are conservative or “right wing,” (not progressive or “left wing”), they are elitist, not populist — and, especially, they are not left-wing populist (or progressive). Donald Trump was a right-wing populist (which is another form of aristocratic policy-fakery, besides the liberal type — either type is mere pretense to being non-fascist). But no aristocrat is progressive, and this means that in a corrupt ‘democracy’, all of the policy-proposals that become enacted into laws are elitist even if of the noblesse-oblige or “liberal” form of that. The Government, in such a nation, always serves its billionaires, regardless of what the public wants. That’s what makes the country an aristocracy instead of a democracy.

As the former U.S. President Jimmy Carter had said in 2015, commenting upon the profound corruption in America: 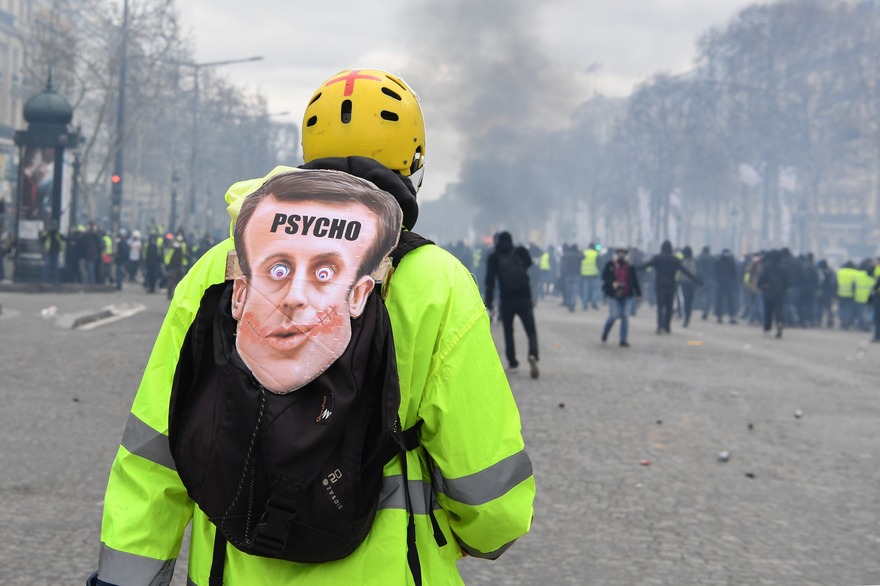 A Yellow Vest protester wearing a mask depicting the French President on which is written the word 'psycho' looks at fellow protesters in Paris on March 16, 2019, during the 18th consecutive Saturday of demonstrations called by the 'Yellow Vest' (gilets jaunes) movement. Yellow Vests are pushing for referenda, as a form of direct popular democacy, but this option has its own set of pitfalls.

In France, one of the primary sources of the dictatorship is the dictatorship’s intensification in 2008 from a new Constitutional provision, Section Three of Article 49, which facilitates rule-by-decree (“executive decree”) from the President, when the Parliament is opposed to his policy-preferences. This Section gives the aristocracy an opportunity to override Parliament if the other methods of corruption (mainly by France’s having no “ban on donors to political parties/candidates participating in public tender/procurement processes” — predominantly arms-manufacturers who are donors) are insufficient to meet the desires of the aristocracy, but, otherwise, France has remarkably strict laws against corruption — far stricter than in Germany, and in Russia — and thus the French Government represents mainly corporations that sell directly to the Government. Consequently, when “all else fails,” and the Parliament turns out to be inadequate (insufficiently imperialistic) in the view of France’s billionaires, Section 49-3 is applied by the President. (America, like France, has strict laws against corruption, but they are loaded with loopholes, and, so, America has almost unlimited corruption. America’s legislature is even more corrupt than is France’s.) Ever since France’s Tony Blairite Socialist Party (neoliberal-neoconservative) Prime Minister Manuel Valls started in 2016 to allow French Presidents to use the 2008-minted 49-3 Section to rule by decree and ignore Parliament, France has increasingly become ruled-by-decree, and the Parliament is more frequently overridden.

After the recent French Parliamentary elections, the current French President, Emmanuel Macron, who has often been ruling by decree, will do so even more than before. As the Iranian journalist in Paris, Ramin Mazaheri, recently said: “Elections at just 46% turnout are a hair’s breadth away from not having democratic credibility, but that must be added with [to] the constant use of the 49-3 executive decree and the certainty of a Brussels’ veto for any legislation they don’t like. It combines to modern autocracy – rule by an oligarchical elite.”

Perhaps low voter-turnout is an indication that the nation will have a revolution. After all, both America and France did that, once, and it could happen again, in order to overthrow the aristocracy that has since emerged after the prior one was overthrown. Someone should therefore tabulate how low the voter-turnout has to go in order for a revolution to result. The post-1945 American Government has perpetrated incredibly many coups against foreign governments, but perhaps the time will soon come when dictatorships such as in America and France become, themselves, democratically overthrown. Both countries have degenerated into minoritarian right-wing governments. At least in France, the public seems to be becoming aware of this fact. Neither Government now has authentic democratic legitimacy.