Trump Asks Germany, Japan To Pay For Being Occupied

It will fun to watch this developing:

Under White House direction, the administration is drawing up demands that Germany, Japan and eventually any other country hosting U.S. troops pay the full price of American soldiers deployed on their soil -- plus 50 percent or more for the privilege of hosting them, according to a dozen administration officials and people briefed on the matter.
...
Current and former administration officials briefed on the idea, who asked not to be identified discussing the program, describe it as far more advanced than is publicly known. As well as seeking more money, the administration wants to use it as a way to exert leverage on countries to do what the U.S. demands overseas.As evidence, they say officials at the Pentagon have been asked to calculate two formulas: One would determine how much money countries such as Germany ought to be asked to pay. The second would determine the discount those countries would get if their policies align closely with the U.S.

The extortion scheme Trump wants to use against 'allies' is a perfect [instance of scoring a] goal against oneself. 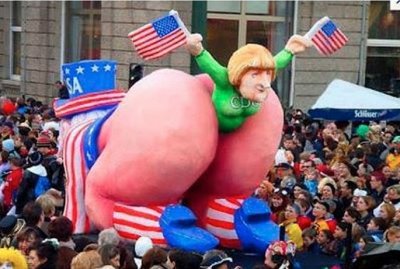 The German government under Chancellor Angela Merkel is already accused of being too deep inside the U.S. rear.

Her party supported the war on Iraq and now joined the illegal regime change attempt in Venezuela. The public is way less pro-American than German politicians. It will be quite difficult for Merkel and others to justify additional billions for U.S. troops in Germany. They are neither needed nor wanted. (The only sound reason to keep the 30,000 U.S. troops in Germany is to prevent them from moving to Poland from where they could threaten the country.)

The situation in Japan is similar. The government of Prime Minister Shinzō Abe supports hawkish U.S. policies but is also under attack over a new U.S. base on Okinawa. It will have problems to justify spending for the privilege of keeping the country under U.S. occupation.

Trump's extortion racket will make it more difficult for Merkel and Abe to ally with the U.S. on other issues.

That is a sound reason to welcome it.

Posted by b at 11:26 AM
About the Author
The above is a dispatch filed by "b", editor of Moon of Alabama.