A dispatch from Moon of Alabama

[dropcap]V[/dropcap]enezuela currently experiences multiple total outages of its electricity network. It is quite possible or even likely that the U.S. is causing these incidents. But it is not certain.

Shit happens and so do long blackouts:

The Northeast blackout of 2003 was a widespread power outage throughout parts of the Northeastern and Midwestern United States and the Canadian province of Ontario on August 14, 2003, beginning just after 4:10 p.m. EDT.Some power was restored by 11 p.m. Most did not get their power back until two days later. In other areas, it took nearly a week or two for power to be restored. [...] The outage, which was much more widespread than the Northeast Blackout of 1965, affected an estimated 10 million people in Ontario and 45 million people in eight U.S. states.

The blackout's primary cause was a software bug in the alarm system at the control room of FirstEnergy, an Akron, Ohio–based company, causing operators to remain unaware of the need to re-distribute load after overloaded transmission lines drooped into foliage. What should have been a manageable local blackout cascaded into collapse of the entire electric grid.

When the northeast blackout happened no one blamed President Bush or socialism for the outage.

Bringing an electricity grid back into full and balanced operation is quite difficult because power generation and consumption must always be balanced. Restoration can only be done gradually. It is a complicate process and takes time.

The Guri Dam hydro electric power station produces up to 10,235 megawatt. It provides 70-80% of all electricity used in Venezuela. 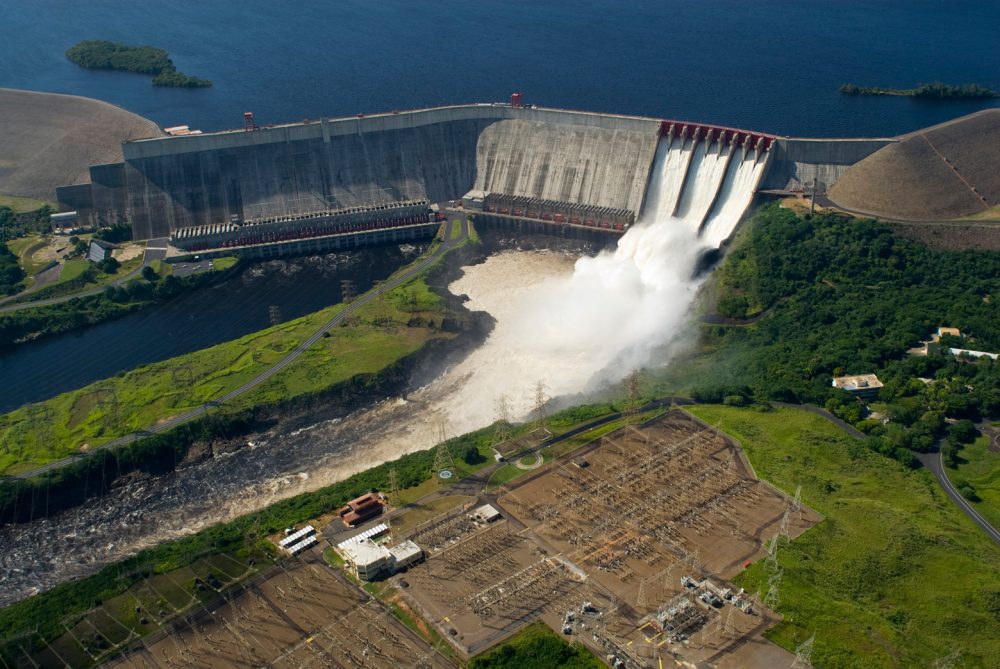 The blackout affected 18 out of 23 states in Venezuela with some 25 million people. It took 24 hours for some power to come back.  It would have taken another day or two for the network to again reach full capacity.

But today another total outage happened:

The internet connectivity of a country if often an excellent indicator for power outages. Mobile towers, routers and switches need electricity. 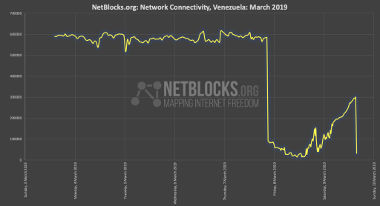 bigger
The graph shows a total of three outages over now three days. The last incident might have been caused as a side effect of a previous outage, by recovery attempts or by a separate sabotage act:

Reports and videos of an explosion at the SIDOR steel company hydroelectric sub-station in Puerto Ordaz, Guayana started to circulate on social media shortly after the latest disruption was detected, indicating a cause for the new outage.

Unverified videos show a burning transformer at a larger substation.

When the first outage happened U.S. Senator Marco Rubio eagerly mocked the government of Venezuela. He also mentioned that some backup generators failed:

Marco Rubio @marcorubio - 22:18 utc - 7 Mar 2019
ALERT: Reports of a complete power outage all across #Venezuela at this moment.
18 of 23 states & the capital district are currently facing complete blackouts.
Main airport also without power & backup generators have failed.
#MaduroRegime is a complete disaster.

After the first outage the government of Venezuela said that it was caused by a cyberattack on the automated control system but gave no further details:

Communications Minister Jorge Rodriguez said Maduro's government planned to bring "proof" of US involvement in the blackout to a UN Human Rights envoy who is set to visit the country in the coming days.

'How did Marco Rubio know that backup generators had failed? At that time, no one knew that,' the Bolivarian government official asked.

The Venezuelan government should contact the Russian cybersecurity specialists at Kaspersky Lab who are well known for detecting U.S. produced malware like the one used for the Stuxnet attack on Iran's uranium enrichment plant. Kaspersky is highly respected in the international cybersecurity scene. Should it confirm that a U.S. attack malware caused the problem the U.S. will find it difficult to deny.

“This is a multiyear decline in Venezuela,” Mr. Abrams said. “The situation there, due to the mismanagement, the economic policies and the sheer corruption of this regime, are the cause of those problems.”

In 2003, during the northeast blackout, Mr. Abrams was a special assistant to President G.W. Bush. He did not blame "the mismanagement, the economic policies and the sheer corruption" the Bush regime when that much larger outage happened.

It is quite possible that the U.S. is causing the outages in Venezuela's network. The second total outage yesterday and the third today could be explained by a malware hidden within the control system of the whole network or in some important side components. It took the Iranian government months to find the malware that again and again crashed its uranium centrifuges. Simply restarting the control systems did not help.

The U.S. is well know for cyberattacks as well as for attacks on electricity networks. In 2012 it knocked Syria off the internet when it 'bricked' the central router in Syria while attempting to install malware. In 2015 it systematically bombed Syria's power plants.

The CIA and other U.S. agencies have been quite active in Venezuela for a long time. In 2017  then CIA director Mike Pompeo admitted that he was tying to get others on board for 'regime change':

In one of the clearest clues yet about Washington’s latest meddling in the politics of Latin America, CIA director Mike Pompeo said he was “hopeful that there can be a transition in Venezuela and we the CIA is doing its best to understand the dynamic there”.He added: “I was just down in Mexico City and in Bogota a week before last talking about this very issue, trying to help them understand the things they might do so that they can get a better outcome for their part of the world and our part of the world.”

In preparation for the 1973 coup against Allende in Chile the U.S. also caused blackouts. Back then the New York Times reported:

SANTIAGO, Chile, Aug. 13 — A power cut brought a total blackout here as President Salvador Allende Gossens was in the middle of a nationwide address on the country's political crisis.
...
The electricity went off at 10:15 P.M., 35 minutes after President Allende had begun to speak, citing long list of recent acts of terrorism and sabotage that he attributed to “fascist opposition.”He went back on the air, The Associated Press reported, as power was beginning to be restored in some areas, and said that the blackout could have been either “a technically explicable failure or a fascist attack.” The news agency said that unidentified saboteurs blew up an electric‐power transmission line outside the city, attributing the information to Fernando Figueroa, general manager of the state power system.

It wasn't just the "fascist opposition" but the CIA behind it that caused the chaos:

As described in the Church Committee report, the CIA was involved in multiple plots designed to remove Allende .. [...] [T]he CIA, with the approval of the 40 Committee, attempted to bribe the Chilean legislature, tried to influence public opinion against Allende, and provided funding to strikes designed to coerce him into resigning. [...] In addition, the CIA gave extensive support for black propaganda against Allende, channeled mostly through El Mercurio. Financial assistance was also given to Allende's political opponents, and for organizing strikes and unrest to destabilize the government.

On February 24, after the 'humanitarian aid' stunt at the Colombian border failed, we foresaw that such incidents would happen:

U.S. Vice President Mike Pence will arrive in Colombia tomorrow to tell Guaido how to proceed. The focus will most likely be on how to start a sabotage campaign and a low level guerrilla war within Venezuela. Both will certainly hurt the country and its people but they are unlikely to achieve the larger "regime change" aim.

A U.S. cyberattack on Venezuela's power grid will have taken some time to implement. One first has to understand a system before one can sabotage it without leaving obvious fingerprints. If the U.S. is involved in these incidents, it is likely that it prepared for this months if not years ago.

Attacks on electricity networks affect the civilian population. Hospitals are hard to run without electricity. Lives are endangered. Both the Obama and the Trump administration, rejected international attempts to ban cyberattacks that "indiscriminate or systemic harm to individuals and critical infrastructure":

All members of the European Union signed the agreement. Australia and Turkey joined the United States in declining.
...
Israel, which along with the United States conducted the most sophisticated cyberattack in history, the Stuxnet attack on Iran’s nuclear enrichment program, also declined to sign.

The U.S. also rejected an agreement that would ban cyber manipulation of elections. The given reasons are of interest:

[T]he United States has interfered in foreign elections before, including Italy in the 1940s and Iran and Latin America in the 1950s and 1960s, and some officials say that no American president should be forced to give up that tool if it could prevent a war. (sic)
Similarly, the Pentagon worries about commitments to avoid using cyberattacks as a prelude to military action. The United States had a secret program, code-named “Nitro Zeus,” which called for turning off the power grid in much of Iran if the two countries had found themselves in a conflict over Iran’s nuclear program. Such a use of cyberweapons is now a key element in war planning by all of the major world powers.

It will take a cyberattack on vital U.S. systems with long lasting effects to change its malicious standpoint and behavior.

ABOUT THE AUTHOR
Moon of Alabama's dispatches are authored by its chief editor, "b" (widely assumed to be "Bernhard"), a German journalist.

Except for two abject vassal states, Latin America may be balking at Washington’s filthy designs for Venezuela

Trump Asks Germany, Japan To Pay For Being Occupied