Home ABOMINATIONS WaPo’s ‘Hard-Line’ Stance Against Medicare for All

[su_testimonial]Like all major media, the Washington Post, owned by Jeff Bezos, the world's richest (non-royal) plutocrat, is an enemy of the people. In that role, it leads the pack with the New York Times. [/su_testimonial]

[dropcap]T[/dropcap]he phrase “hard-line,” as commonly used in the Washington Post, is almost always a pejorative. Often it references official enemy states like Iran (5/4/18, 5/9/18) or North Korea (1/18/19). In a recent Post (3/11/19) article, however, reporter Paige W. Cunningham used the term to refer to a different kind of enemy: proponents of Medicare for All. 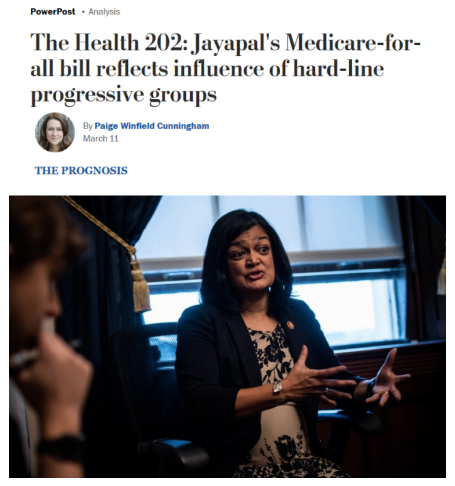 A Washington Post news piece (3/11/19) claims Rep. Pramila Jayapal’s Medicare for All bill “reflects the influence of hard-line liberal groups and unions,” as well as “advocates on the far left,” who would “upend health coverage for tens of millions of Americans.”

Among the “hard-line liberal groups and unions” the article refers to in its headline and lead is the Consortium of Citizens with Disabilities, a coalition of approximately 100 national disability organizations. The “hard-line” groups include much of the grassroots movements for healthcare justice in the country: National Nurses United, Social Security Works and the Center for Popular Democracy.  These orgs—described elsewhere in the piece as “advocates on the far left”—are devoted to such “hard-line” positions as universal healthcare, protecting senior citizens and empowering voters and activists. The Post is concerned that these groups provided input to Rep. Pramila Jayapal as she wrote the Medicare for All legislation (H.R. 1384) she introduced in February.

In fact, what the Post describes as “hard-line” and “far left” is actually a very popular position. Medicare for All has long polled well among the public at large, especially Democratic voters. A Reuters poll from 2018 (The Hill, 8/23/18) showed 70 percent of the public, 85 percent of Democrats and 52 percent of Republicans support Medicare for All.   That poll is the high water mark, but the policy polls well in most other polls as well (Politico/Harvard, 1/7/19).

This popular support was not mentioned by the Post. In fact, the article asserted that the “bill would overhaul the US healthcare system so dramatically that summoning broad public support for it seems like a tall order.” Yet Medicare for All already has broad public support, despite its reputation on K Street and Capitol Hill—and, evidently, in the Washington Post’s newsroom.

Acceptably mainstream groups
Neera Tanden, an opponent of Medicare for All, was the person that the Washington Post thinks should have been consulted on a Medicare for All bill.

The Post article tried to marginalize Medicare for All advocates by contrasting them with more establishment think tanks who helped design Obamacare:

Instead of consulting with influential organizations such as the Center for American Progress or Families USA—two groups deeply involved in the crafting of the 2010 Affordable Care Act—staff for the Washington Democrat invited feedback over the past few months from a slew of groups further to the left.

Both these groups would be odd choices to get input from on a Medicare for All bill, given that neither organization advocates for the policy. Families USA is an especially aggressive advocate for preserving the Affordable Care Act. Families USA founder Ron Pollack was quoted by Third Way (5/4/18)—a corporate-funded group devoted to pushing Democrats to the right—in an essay about why Democrats should avoid the single-payer issue.

Cunningham failed to observe that the Center for American Progress has received donations from the likes of Blue Cross Blue Shield, CVS Caremark and Americans Health Insurance Plans (AHIP), the largest insurance lobby in the country (Politico, 12/13/13).

The implication from Cunningham—who has been critiqued for parroting right-wing talking points by the liberal watchdog group Media Matters (2/15/18)—is that there are acceptably mainstream policies like the ACA, backed by acceptably mainstream groups like CAP. Jayapal and others, on the other hand, are going “a step (or steps) too far” with Medicare for All, “as it would upend health coverage for tens of millions of Americans”—according “to some progressives.”

Assuredly “some progressives” disagree with the Medicare for All policy. It is also true that “some conservatives” agree with the policy.  In fact, you can put the word “some” before virtually any demographic group and be correct. Given the volume of information about this issue available, it is hard to believe the Post could not be bothered to put these vague terms in context. Who are these progressives? Voters or politicians? Do they get money from the industry? There was no information about any of that. 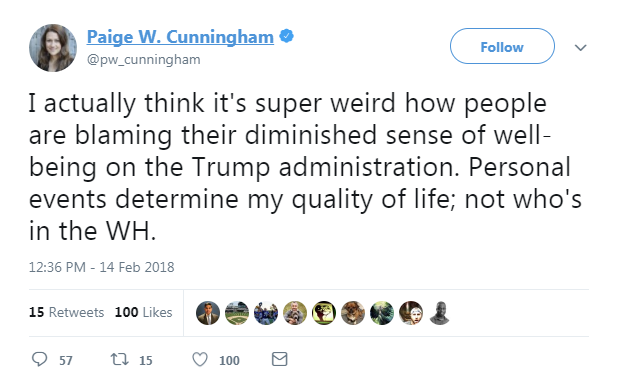 A since-deleted tweet from Washington Post reporter Paige Cunningham (2/14/18) said it was “super weird” that people felt the Trump administration affected their “quality of life.”

The Post article has several factual inaccuracies, including the kicker to the “some progressives” passage, which claimed Medicare for All “could cost many times more than the ACA.”

Almost anything could happen, theoretically, but this is a misleading statement at best. If by “cost” Cunningham means only government expenditures, then it’s almost tautological, since the point of single-payer is to shift healthcare funding from private to public insurance.

If she’s using “cost” in a more meaningful sense—as in, how much do we as a society spend on healthcare?—there is really no evidence to support the idea that single-payer would cost more than the ACA.  The ACA had very little cost containment at all. The US currently spends 18 percent of GDP and rising—the most in the world, by far—on healthcare. Under the most optimistic CBO projections (3/20/10) for Obamacare, at its best it would leave 22 million uncovered, and costs would continue to rise (if at a lower rate). A more recent analysis from the Centers for Medicare and Medicaid (2/15/17) “projects the health share of GDP to rise from 17.8 percent in 2015 to 19.9 percent by 2025.”

Contrarily, single-payer systems—as seen around the world—are far less expensive, due to savings on administrative waste and better bargaining power for drug prices.  In fact, these savings are what make universal, comprehensive care possible. The cost effectiveness of Medicare for All is its main attraction. Even the the Mercatus study (with its ties to the Koch brothers) said Medicare for All would cost $2 trillion less over 10 years than what we are projected to pay now (The Nation, 7/31/18).

The Post mentions the new bill would use “global budgets,” and claims this would “open…the door for hospitals in different parts of the country to receive different payments for the same service.”  The problem, as the national advocacy group Healthcare-Now! explains in a tweet, is that the global budgets, by design, don’t use a pay-for-service model with hospitals.

“The whole point of moving to global budgets is that you’re no longer paying hospitals per service, which she herself notes earlier in the paragraph,” Ben Day, the executive director of HealthCare Now!, explained to FAIR.

Critics of single-payer often claim the polls are misleading because “voters don’t understand how such a system would work” (Forbes, 3/19/18). Their understanding of the issue is not likely to improve after reading the Post’s coverage.

Messages can be sent to the Washington Post at letters@washpost.com, or via Twitter @washingtonpost. Please remember that respectful communication is the most effective. <—We understand why FAIR recommends politesse, but disagree with the advice. These people at WaPo are jaded, deliberate criminals. Professional disinformers. What they need to hear is that the people are on to them, and damn pissed. Ready for the pitchforks. Treat them with the disrespect they deserve, for they are NOT going to change theiwr ways by asking them politely. You might as well.

About the Author
Michael Corcoran is a journalist based in Boston. He has written for the Boston Globe, The Nation, the Christian Science Monitor, Extra!, NACLA Report on the Americas and other publications.