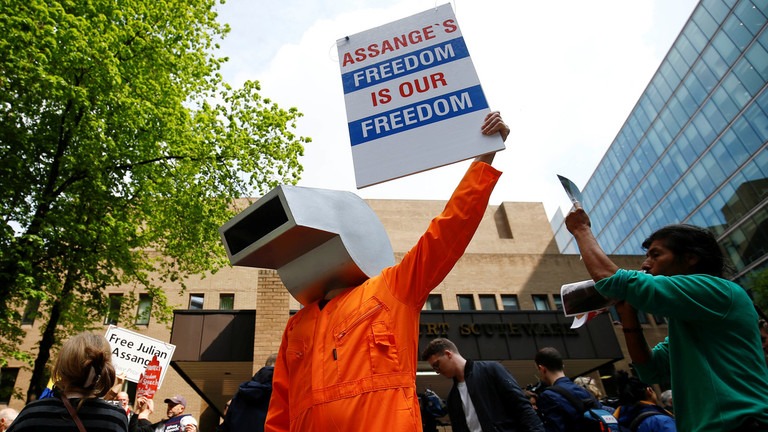 May 1, 2019—Assange supporters protest the harsh sentence imposed by a British court for what everyone knows was a fabricated case agaist him. Fears of extradition to the US are well founded.

WikiLeaks has slammed a UK court’s sentencing of its co-founder Julian Assange as “vindictive.” It also raised major concerns about whether Assange will be treated fairly during an upcoming extradition hearing.

The sentence “is as shocking as it is vindictive,” WikiLeaks said on Twitter on Wednesday, shortly after Assange received almost a year in prison for violating bail conditions.

We have grave concerns as to whether he will receive a fair extradition hearing in the UK.

The Southwark Crown Court in London on Wednesday sentenced Assange to almost a year for “violating bail conditions.” Last month, he was formally convicted of skipping bail in the UK in 2012 when he was wanted over a rape allegation in Sweden (the case was later dropped).

Judge Deborah Taylor told the journalist that he had used bail to escape the law and expressed disdain for British justice.

In a letter read to the court, Assange explained that he was “struggling with circumstances” when he did so.

I did what I thought at the time was the best or perhaps the only thing that I could have done.

The whistleblower also apologized to all who “consider I’ve disrespected them.”

WikiLeaks slammed the sentence as “shocking” and “vindictive,” adding that they have “grave concerns” as to whether Assange will get a fair extradition hearing, scheduled for Thursday.

Assange was arrested on April 11 after, resisting and yelling, he was dragged out of the Ecuadorian Embassy in London. He had claimed asylum there for several years out of fear that the British authorities would hand him over to Washington.

Julian Assange skipped bail in 2012 while wanted in Sweden over rape allegations (the case was later dropped). The journalist then spent the next several years living under asylum in the Ecuadorian Embassy in London, out of fear Britain would hand him over to the US. He was forcibly dragged out of the building last month after the South American nation decided to evict him.

The arrest drew the ire of activists, journalists, and politicians who slammed it as a major threat to freedom of the press.

In the US, Assange was charged with “conspiracy” while working with whistleblower Chelsea Manning, who obtained classified data from a Pentagon computer, which was subsequently published by WikiLeaks. Among the leaked files was footage of US troops killing civilians in Baghdad.

Social Unrest as Obstacle to Colombian Military Intervention in Venezuela