May the Fourth Estate Rise Again: Occupy the NYTimes 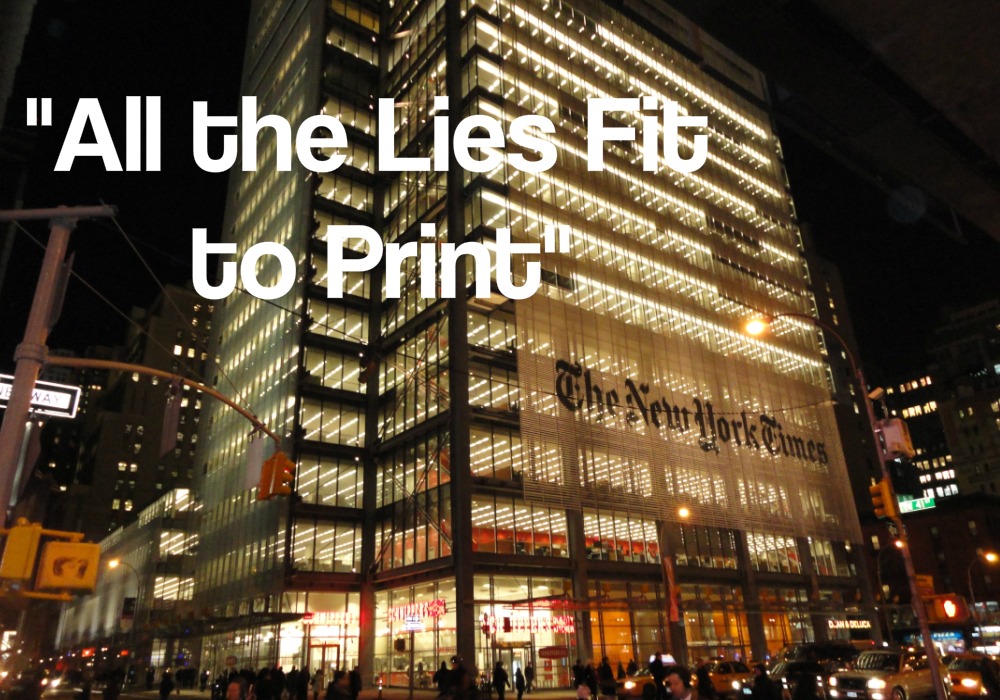 The "liberal" intellectual (mainstream) press has abused the trust we have invested in them, and has long perpetrated a campaign of rolling deception. I want to see a thousand people picketing the NYTimes building on 42d Street, camping out day and night, chanting "Tell us the truth!".

I want to put OpEdNews out of business.

Small, independent news organizations like ours, organizations that run on volunteer labor and a trickle of donated cash, are the only place to find political truth in today's America. Meanwhile, the "liberal" intellectual (mainstream) press has abused the trust we have invested in them, and has long perpetrated a campaign of rolling deception.

They tell us tales about why war is necessary, why there isn't enough money to feed or house our people, why socialism doesn't work, why the Republicans and Democrats represent the only practical choices available to us. They explain to us how (in the immortal words of Mr Eternity ) "It were too expensive to save nature; it were cheaper to destroy it."

Americans aren't stupid. Americans have been brainwashed by the most sophisticated and devastatingly effective methods that modern psychological research can devise. "If you believe X, you will be an outcast. None of the successful and desirable people will be your friends." Political stories are sold to us with the same technology that convinces us to buy brand-name scents and soaps and coffee and automobiles. Madison Avenue is selling us war and imperialism--and we have one helluva case of buyer's remorse.

Those controlling our money supply have bought the newspapers and TV stations, and thus they have maintained control of our political narrative.

I remember a seismic moment in the history of my belief system. It was 2006, and I had started several times to watch the movie Loose Change and couldn't keep my attention on it. So one day in March, I set up the elliptical machine in front of the computer screen and pumped as I watched. As I grew more uncomfortable, I didn't turn the movie off, but only pumped harder. I watched and I pumped and I grew wilder and more exhausted, until I collapsed in a puddle of tears and a maelstrom of thoughts and images. When I peeled myself off the floor and opened my eyes, I realized I had been mourning not for my government or my Vice or for the thousands they had murdered. My faith in these had long ago been whittled to a toothpick. No, I was mourning for the NYTimes, for The Nation, for NPR, for the sources of information about the world that I had trusted all my adult life and could no longer trust. For more than five years after 9/11, I had believed the improbabilities and contradictions that were the Official Narrative of 9/11. I had believed them because I could not conceive orchestrated deceipt on such a vast scale. When I stood up that afternoon, I was in a world where I knew a lot less than I had known half an hour before. Today I know even less, and console myself only that at least I know that I don't know.

If they lied to me about something as big as 9/11, what else were they lying about? WMD in Iraq? The role of our CIA in the heroin trade ? Corruption in the machines that count our votes? The safety of vaccines? The Maduro government? Israeli atrocities in Gaza? Suppressed cancer cures? Clean, abundant energy alternatives? The scientific foundation of parapsychology? Contact with space aliens? The Federal Reserve? Assassinations from Huey Longthrough the Kennedys all the way to Mike Connell? Tulsi Gabbard's presidential campaign? Where are the successors to Operation Gladio, Operation Mockingbirdand MKUltra, and who is in charge?

...were it left to me to decide whether we should have a government without newspapers or newspapers without a government, I should not hesitate a moment to prefer the latter. But I should mean that every man should receive those papers and be capable of reading them.

We need reliable information. The stories we read are what hold our nation together. OpEdNews doesn't have the resources to investigate all these topics and separate the facts from the rampant disinformation. Even if we could determine the truth about every one of these topics, we do not have the reach or the credibility to establish those truths in the minds of America's intelligentsia, the braintrust that leads our nation forward (or not).

The NYTimes has the resources, but they're put to use drowning us in propaganda that serves the powers that be instead of searching for and revealing truth.

The last two years has seen the meteoric rise of the "fake news" meme. We are told that we, the public, cannot be trusted to sort through alternative accounts of reality available to us, so we should rely on a centralized arbiter of truth and shut off access of alternative accounts to social media outlets.

There is indeed a crisis, but not as it has been characterized. The crisis is not that we have alternative accounts of reality, but rather that some of these contain truths that our mainstream "free press" has kept hidden from us. The crisis is that the version of the world that the mainstream media presents to us no longer passes the smell test. The lies have gotten ever bigger, the topics swept under the carpet have created a bulge we cannot ignore, and meanwhile the Internet has provided compelling alternative narratives for anyone who cares to look. The NYTimes version of some key events has diverged so far from the truth that no one with an independent mind can fail to notice. The fake emergency of "fake news" is a desperate ploy on behalf of those who are losing their grip on the mainstream narrative.

I want to see a thousand people picketing the NYTimes building on 42d Street, camping out day and night, chanting "Tell us the truth!", holding placards with five specific demands for topics that need investigation.

We as a movement can fill in the other three (or twenty-three). There are plenty of topics to choose from.

I am a writer, not an organizer. Will you, dear reader, step forward to carry forth this vision?

Caitlin is right. All our movements for peace and social justice and environmental sanity have been falling flat because we are unable to tell our own story. We have allowed the NYTimes to tell the story for us. Yes, the machinery of democracy is badly broken, but "we are many -- they are few." With much less democracy than remains in the US, others have succeeded in throwing off their shackles. In our lifetimes, it has happened <elsewhere>. It can happen in Washington, and it will be so, so much smoother and easier once the NYTimes is reporting honestly.

About the Author
Josh Mitteldorf, a senior editor at OpEdNews, blogs on aging at http://JoshMitteldorf.ScienceBlog.com. Read how to stay young at http://AgingAdvice.org. Educated to be an astrophysicist, he has branched out from there to mathematical modeling in a variety of areas, including evolutionary ecology and economics. He has taught mathematics, statistics, and physics at several universities. He is an avid amateur pianist, and father of two adopted Chinese girls, now grown. He travels to Beijing each year to work with a lab studying the biology of aging. His book on the subject is "Cracking the Aging Code", http://tinyurl.com/y7yovp87.

Blatant Violation, by U.S. & Its Allies, Against the U.N. Charter